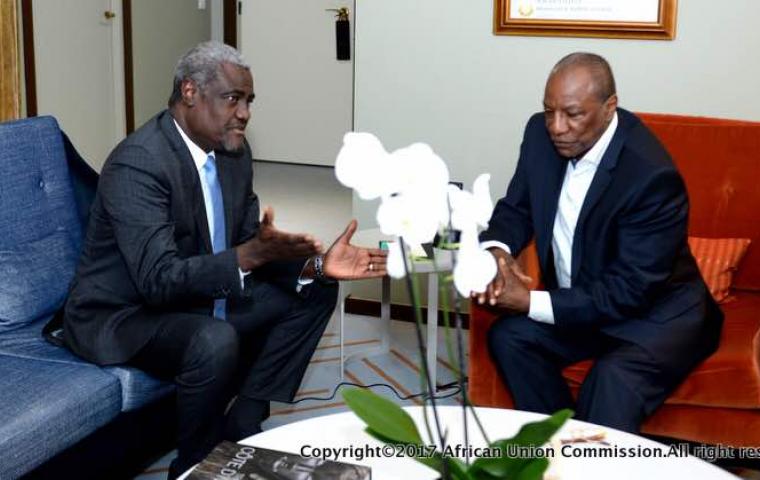 While presidential term limits have become ubiquitous in West Africa, Guinea is seeking to buck the trend at a time of complex political volatility. Condé has a great opportunity to cement his positive legacy by rejecting efforts to allow him to run again. The African Union and ECOWAS should also encourage him to respect the constitutional ban on the amendment of the term limit provision – writes Dr Niang.

Guinea is facing a constitutional, political and security crisis as a result of controversial efforts to adopt a new constitution. In early August 2019, the Democratic Coalition for a New Constitution (CODENOC), a grouping of political party and civil society allies of the ruling coalition, was established. Supporters of a new constitution argue that reforms are crucial to allow incumbent President Alpha Condé to finish his projects, in addition to strengthening democracy and allowing independent candidates to contest elections. Moreover, a new constitution would arguably be more legitimate as it would be subject to a referendum, unlike the current 2010 Constitution which was enacted by the transitional military council.

Nevertheless, the attempt to adopt an ostensibly new constitution through referendum is principally intended to bypass the prohibition against constitutional revisions tampering with presidential term limits. Under the Constitution, this provision imposing two presidential term limits cannot be amended. The adoption of a new constitution is therefore seen as the only way to change the unamendable provision. While constitutional term limits recently enabled the first peaceful transfer of power in Mauritania, Guinea (and Cote d’Ivoire) faces a conundrum as the ruling coalition and President Condé’s supporters seek ways to allow him to run for a third term. So far, regional bodies, notably the African Union and ECOWAS, have been reluctant in communicating a firm position on the issue of term limits. Condé has also so far avoided directly expressing his position.

Term limits are important in enabling alternation of power, preventing incumbent abuses, strengthening citizens' trust in institutions and contributing to the stability of emerging democracies. Despite their value, Guinea’s government and a group of actors are actively preparing the ground for a referendum to change the constitution and tamper with constitutional term limits. The constitutionality, necessity, usefulness, and urgency of this initiative is questionable.

The current 2010 Constitution was adopted without a referendum based on a consensual demand of political and social actors who wanted to shorten the transition.

The controversial reform plans have emerged on the hills of other challenges where the 2019 parliamentary elections have been postponed to the end of 2019 and disputes following the 2018 local government elections, where the ruling party lost the Capital Conakry, have still not been effectively resolved. The tensions related to the revision of the constitution could be the proverbial last straw that would break the camel’s back. The real interrogation is not whether the president and his supporters can win a constitutional referendum or not, but rather whether Guinea’s fledgling democracy and stability could withstand the crisis it would entail. The attempt to change the constitution could also taint Conde’s important contributions in strengthening democracy and development since 2010.

Term limits, a shared value of Guinean constitution builders since 1990

Guinea has had four constitutions since its independence in 1958. The third constitution, adopted in 1990, marked a historic break with the old system characterized by the pre-eminence of the party-state. Notably, the constitution introduced two term limits on the presidency. In 2001, President Lansana Conte, who won the first two elections under the 1990 constitution, led the adoption of controversial constitutional amendments through referendum. This allowed him to run for a third term in 2003 and win the elections. The maneuver led to recurrent political and social crises until Conte’s death in 2008. Then one of the prominent opposition leaders, Condé opposed the tampering of term limits.

The 2010 Constitution was born out of the 2008-2010 political transition. It was drafted by a constituent assembly (Conseil National de la Transition), before being enacted by the head of state at the time, General Sekouba Konate, without a referendum. The exceptional situation that led to the adoption of the constitution without a referendum does not call into question its legitimacy. It was a consensual demand of the political and social actors who wanted to shorten the transition to stay in the spirit of the Ouagadougou agreement. The 2010 Constitution restores and strengthens presidential term limits. The constitution specifically provides that 'no one can exercise more than two presidential terms, consecutive or not'. This is further reinforced whereby ‘the number and the duration of the mandates of the President of the Republic may not be made the object of a [constitutional] revision’. There is no doubt that term limits is among the shared values of Guinean constitution builders since 1990 and is a cornerstone of political and moral legitimacy.

The peaceful alternation of political power resulting from term limits has similarly become almost routine in many West African countries. Even Togo and The Gambia, outliers whose respective constitutions contain no presidential term limits, have made important moves recently towards constitutionalizing this principle. Recently, in two post conflict countries, Liberia and Sierra Leone, as well as in Mauritania, incumbents handed over power peacefully after completing two terms in office, as provided constitutionally. In Niger, President Issoufou has assured that he will not seek to modify the Constitution to run for a third term in 2021. In all other countries in the region, changes of presidents after two terms has become common.

Given this Guinean and West African context, many people who fought for democracy in Guinea including the former Minister of Justice have admonished the desire of the government, the ruling coalition and their supporters to initiate a process of adopting a new constitution at any cost. They question the timeliness, urgency and feasibility of such a reform 15 months away from the planned 2020 presidential election. The urgency may partly be due to the provision in the ECOWAS Protocol on Democracy and Good Governance which prohibits substantial modification of electoral rules in the last six months before planned elections, ‘except with the consent of a majority of Political actors’.

The appointment of mayors took more than a year after the 2018 local government elections, and is still subject to opposition protests. Because of the disputes, not all local government officials have resumed office. The election dispute resolution process was marked by violent protest movements despite the government ban imposed in July 2018 (although the participation of the army in joint patrols with the police and the gendarmerie in the main places of protest have reduced clashes, demonstrations and acts of violence). The parliamentary elections which were supposed to take place in early 2019 have been postponed till the end of 2019. Strikes, particularly in the education sector, and violent protests in the mining region of Boké have become recurrent.

Condé can take the opportunity to anchor democracy in the hearts and minds of Guineans.

Given the volatile context, a new constitution would carry within itself the seeds of disputes that would put its legitimacy at risk. Indeed, opposition parties, civil society groups and trade unions opposed to constitutional reforms have established the National Front for the Defense of the Constitution (FNDC) and called for protests. As a result, the legitimacy issue advanced by defenders of a new constitution will not be resolved. Worse, its legitimacy would be seriously questioned if opposition groups boycott the constitutional referendum. A new constitution in Guinea in the current context might lack political and moral legitimacy. A possible boycott of the referendum and the outburst of a political crisis could lead to the postponement of the key elections, including the 2020 presidential election. The implications of changing a constitution to run for a third term so close to an election, in a context of lack of trust among political actors are critical to institutional stability.

Condé has the last say

Although several facts and official statements indicate a great willingness of the presidential camp to initiate constitutional reforms, President Condé has so far avoided specifically expressing his desire and plans regarding a third term and a new constitution. Instead, he has equivocally indicated that his decision to run again would depend on the ‘will of the people’. All the major actors for and against a new constitution have expressed their positions but the last word goes to Condé. His official announcement is therefore eagerly awaited. He has the opportunity to anchor democracy in the hearts and minds of Guineans. In this regard, ECOWAS and the African Union should insist that President Condé and the ruling coalition respect the constitution and refrain from bypassing the prohibition on constitutional amendment of term limits. Considering that the constitution prohibits the revision of the provision establishing presidential term limits, any attempt to bypass the ban could constitute an ‘infringement on the principles of democratic change of government’ which is prohibited in  the African Charter on Democracy, Elections and Governance (ACDEG), which Guinea has ratified. Accordingly, the regional organisations should lean on Condé to respect this continental standard.

The 2010 Constitution does not provide for a process to govern the making of a new constitution.