In Nepal, supreme court judges strike while calling for resignation of chief justice 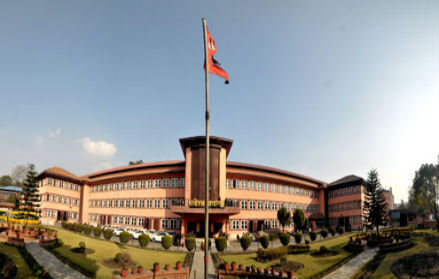 Nepal's Supreme Court (photo credit: myrepublica)
The Supreme Court of Nepal has become sharply divided with judges taking the unprecedented step of boycotting their Benches on [25 October], holding up hundreds of cases. Judges are calling for the resignation of Chief Justice Cholendra Shumsher Rana, accusing him of making deals with political parties, especially with Prime Minister Sher Bahadur Deuba, and even securing a ministerial berth for one of his relatives. On Tuesday, a 14 out the 20 judges met Rana and insisted that he resign to save the dignity and credibility of the judiciary. Rana told the judges he would not resign just because they want it, but would be ready to face an “impeachment motion” in Parliament, the only way provided in the Constitution to seek the exit of a judge or CJ. When they mentioned “controversial” verdicts he had delivered, Rana said, “Let us all review the so-called verdicts given by all of us.” Political parties on both the ruling and opposition sides have so far been silent on the controversy.
Read the full article here: Indian Express