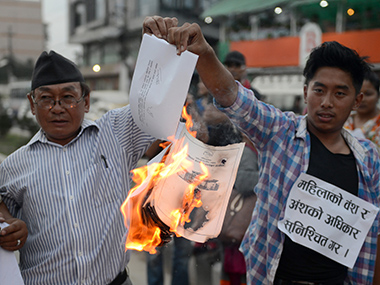 Defying a court order and amid opposition from fringe parties, Nepal’s major parties have pushed through a draft constitution that is regressive in terms of the interests of marginalized groups.

After the 16-point deal made by the four main parties regarding key contentious issues last month, the Constituent Assembly (CA) swiftly worked out a new charter draft, despite the Supreme Court staying the implementation of the deal. The Court order states that the 16 point agreement infringes on provisions of the interim constitution that require the CA itself to delineate and name the provinces in the future federal structure of Nepal. Yet, the major parties publicly rejected the Court order and tabled the preliminary draft of the new constitution on July 2 – an act that called into question the legality of the document. The CA approved the draft after holding deliberations for less than a week and sought the input of the public. The public consultation period was concluded last week.

As soon the draft was tabled, mainly Madhes-based, fringe parties tore  copies of the draft constitution in the CA and have boycotted subsequent CA sessions arguing that the draft violated the Supreme Court order and failed to reflect the interests of marginalized groups, including women, Madhesis, indigenous peoples, Dalits and religious minorities. Fringe parties and representatives of marginalized groups have burnt copies of the draft constitution all across the country. The latter has strongly advocated against the proposed unequal gender provisions, especially regarding citizenship rights. While Dalit, Muslim and Christian groups have also protested against the draft constitution. CA members from indigenous communities from across the political spectrum submitted a 53-point proposal for amendments.

The draft constitution brings some advances in terms of fundamental rights, such as the inclusion of sexual orientation, pregnancy, as well as marital and financial status as new grounds of non-discrimination and listing the rights of Dalits and senior citizens under separate chapters. However, the draft weakens these provisions through extensive limitation clauses. The draft constitution falls short not only of the aspirations of marginalized groups but also of the interim constitution, especially regarding participation in state structures, gender and ethnic equality and, most importantly, federalism.

Nepal’s interim constitution enshrined the right of various marginalized groups to participate in state structures commensurate with their proportion in the population of Nepal. Proportionate representation was already agreed upon in the first CA. The interim constitution also allows for positive discrimination for the protection, empowerment and development of those groups. This has been implemented primarily through putting in place a quota system for marginalized groups in the public service, social services sector and other state agencies that has led to their increased participation.

The draft constitution (Article 43 (4)) retains the right of women to participate in all state agencies on the basis of proportional inclusion. Yet, the federal ministerial council does not include quotas for women. Furthermore, the federal and provincial legislatures only guarantees one-third of seats for women, who make up half of the Nepali population (Art. 88(8) and 175(5)). Other marginalized groups, including indigenous peoples, Madhesis, Dalits and Muslims have been denied quotas altogether. The draft constitution stipulates that, as part of the right to social justice (Art. 47), various minority groups, along with the dominant Khas-Arya group, must be ensured access to employment on the basis of the principle of inclusion.

The equality clause (Art. 23) provides for special provisions to protect and empower indigenous peoples, Madhesis and other groups marginalized on social or cultural grounds, along with the dominant Khas Arya group. Such a large list of protected groups effectively qualifies almost everyone in society to receive special treatment, rendering the provision both unachievable and meaningless.

Thus, while the draft constitution posits proportional inclusion as one of the guiding principles of the State (Art. 54), proportional inclusion/representation has been diluted. These provisions will have a significant adverse impact on the participation of marginalized groups in state structures and in decision-making.

Gender inequality is even more prominent in the naturalized citizenship provision (Art. 13), which requires a foreign man married to a Nepali woman to wait for 15 years to acquire Nepali citizenship, whereas a foreign woman married to a Nepali man it is eligible upon relinquishing foreign citizenship after marriage. Art. 282 of the draft constitution prevents such naturalized citizens from election or appointment to key state positions, including that of the President, Vice-President, Prime Minister, Chief Justice and Parliament Chair. It also restricts their appointment in constitutional bodies up to a certain period of time. The provisions will effectively deny the opportunity for a significant part of the population to be appointed in key state positions, particularly children of single mothers and Madhesis.

Women’s leaders argue that the citizenship provisions fail to recognize independent existence of women and men as citizens, and that the provisions facilitate the dependency of women on men, as their access to citizenship is by law tied to the durability of the marriage. The provisions will be particularly discriminatory to Madhesi people, given their history of marrying across the borders with India.

Further, the draft constitution curtails women’s right to inherit ancestral property, which is already guaranteed under the interim constitution. Article 43 (6) of the draft constitution provides that a couple shall have equal right to ancestral property. This implies that a woman can be eligible to inherit property only after she gets married and denies such right to single women. Women’s rights activists have vehemently criticized such inequality, while also demanding the restoration of women’s reproductive rights in the new constitution.

Meanwhile, Nepal’s indigenous peoples and minority Muslims and Christians demand that the new constitution ensure religious equality by institutionalizing secularism as an unchangeable provision in the Preamble. Indigenous leaders further call for removing the reference to the cow as the national animal of Nepal from the draft constitution. Hindus worship the cow as a holy animal, but various non-Hindu indigenous groups traditionally consume it. Muslim groups also seek recognition of their religious laws in the new constitution, as Nepali laws are guided by Hindu religion. On the other hand, pro-Hindu groups, including the fourth largest party Rastriya Prajatantra Party-Nepal, are pressing to reinstate Nepal as a Hindu state.

The interim constitution defines Nepal as a federal State and guarantees that it will have autonomous provinces with full rights as per the aspirations of indigenous peoples, Madhesi, and the people of the remote and other regions. It provides that the CA shall determine the number, boundary, names and structures of the provinces. The draft constitution states that Nepal will have eight provinces based on identity and viability, but the delineation and naming of provinces have been deferred to the Legislature-Parliament, that the CA will be transformed into upon promulgation of new constitution, and the provincial assemblies respectively (Art. 60). While it fails to include federalism in the definition of the State itself (Art. 1), the provinces are not provided autonomy in distribution of powers and resources. In fact, the provincial and local governments are afforded very weak control over resources and provincial and state affairs.

Moreover, Art. 231 empowers the President to warn and adjourn or dissolve the provincial ministerial council and assembly if any province indulges in an act with serious effect on Nepal’s nationality, sovereignty, integrity, or independence. The majority of the federal parliament needs to endorse such adjournment or dissolution within 35 days. Such power to the center adds to the speculations that the new constitution will not provide for a robust federal structure but merely a centralized decentralization.

For now, federalist forces, including indigenous and Madhesi groups, have pressed to settle delineation and naming of provinces by the CA itself in line with the Supreme Court order. They have also insisted to maintain geographical continuity of ethnic/regional settlements in the delineation of provinces, and to reflect ethnic, linguistic or cultural identity in their names. Further, autonomous and protected areas have been sought in regions with dense settlements of smaller indigenous groups. Muslims and Dalits have also demanded continuing their communal settlements in delineation of provinces and local structures. While indigenous lawmakers are mobilizing greater support on their proposed amendments to the draft constitution, indigenous forces are also joining hands to launch mass campaigns against discriminatory provisions. Madhesi parties have already begun their agitation programs, including burning copies of the draft and disrupting feedback collection on the draft constitution.

In order to ‘fast track’ the new constitution, the major parties are suspending many regulations of the CA to shorten time for public consultations and for drafting and deliberations. In their discussions to address the Supreme Court order, Maoists have reportedly pressed for deciding on the delineation and naming of provinces before promulgating the constitution while the CA is in session. However, the rush for a new constitution appears unstoppable with the CA pushing through the public consultations within a short span of 15 days.

The haste elevates the risk of promulgating an exclusionary constitution, which the major parties seem to believe they can get away with due to their numerical majority in the CA. The marginalized groups and fringe parties will continue to oppose the rush to finish the new constitution. Various disgruntled sections within the major parties have also criticized the process and different constitutional provisions. The new constitution thus risks being disowned by a sizeable section of population. The underlying demands for a democratic constitution with inclusion, equality, and justice will not wither easily. Subsequent widespread alienation can give rise to new forms of resistance, which in the longer-run can lead to a great disaster, if violent measures are used in such resistance or to quell it.

Hence, it would be wise of the major parties to decelerate the hasty constitution writing to give greater consideration to the issues of marginalized groups in the draft constitution. It is advisable to carry out further consultations among political actors and general populace on the draft constitution in order to make necessary amendments for addressing their issues. Reaffirming the right of marginalized groups to proportional inclusion, gender equality in citizenship, property rights and reproductive rights, and institutionalizing secularism with religious equality would provide broader agreement on the new constitution and greater political ownership of the document to wider constituencies of women, Dalits and religious and ethnic minorities. Meanwhile, further negotiations on federalism will be needed. A well-planned schedule with a set deadline for such a consultation and amendment process could be the point to begin with.

Prabindra Shakya is engaged in research and advocacy on peacebuilding and human rights, with particular focus on indigenous peoples and minorities.