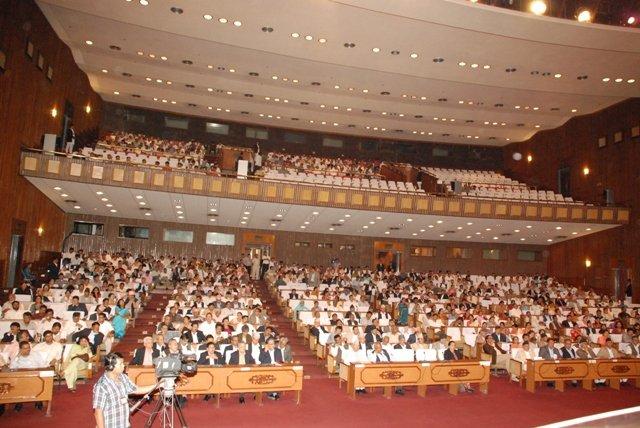 The Constituent Assembly (CA) of Nepal finally adopted its Rules of Procedure (RoP) on March 21, reigniting hopes that the one-year deadline the CA set for itself to finalize the Constitution might be met. This was followed by two other meetings in which the CA decided to adopt agreements concluded by the former CA, and form five new CA committees. It also endorsed a working calendar, reaffirming the promulgation date for a new Constitution by January 22, 2015.

Unpacking the RoP and the Calendar

One thing that strikes anyone reading the new RoP is that they appear to have been carefully designed to ‘fast track’ the process. For instance, it allows for the adoption of some of the agreements reached in the earlier CA. This move reduces the number of issues that require deliberating by the new CA, and by extension requires fewer Committees to focus only on the unresolved issues of the previous Assembly. The rules provide for the formation of eight committees only—down from the fourteen in the previous CA. Two of these committees—the Committee on Capacity Building and Resource Management and the Committee on Citizen Relations and Public Opinion Collection—are procedural committees and three are regulatory committees. The other three are thematic committees: the Constitutional Record Study and Determination Committee; the Constitutional-Political Dialogue and Consensus Committee; and the Constitution Drafting Committee.

The inclusion of provisions allowing for the incorporation of agreements reached in the previous CA made it possible for the new CA to quickly adopt some of these agreements following the finalization of the ROP last month. Building upon that, the CA Chair has also submitted reports of the last CA’s committees to the Constitutional Record Study and Determination Committee. This Committee is tasked with identifying the resolved and disputed issues in the reports, and preparing separate reports on these issues.  The report on resolved issues will be submitted to the Constitution Drafting Committee while that on disputed issues will be forwarded to the Constitutional-Political Dialogue and Consensus Committee.

Upon receipt of the report on disputed issues, the Constitutional-Political Dialogue and Consensus Committee will seek to build consensus on the contentious issues through consultation with representatives of all political parties and stakeholders, including those outside the CA. If an issue is not resolved within a specified period, the Committee has the right to propose the issue to the full CA for decision. The Committee can also submit proposals on any new issues that arise in the process. The CA will decide on such proposals by a majority vote.

The Constitution Drafting Committee is expected to consolidate and prepare a full draft, which it must present to the full house by October 17.  Absent other reservations from the full house, the draft will be submitted to the public for commentary by way of publication in the Nepal Gazette. The Committee on Citizen Relations and Public Opinion Collection will disseminate the draft to the public, compile public inputs and submit a report thereof to the CA. This process will take approximately two months.

Following open debates on the public suggestions, the CA will refer them to the Constitutional-Political Dialogue and Consensus Committee, which will propose revisions to the draft. The CA will discuss the revisions and refer them to the Constitution Drafting Committee for consolidation. The consolidated draft will then be referred back to the full CA for final consideration. Proposals for amendments to articles can be introduced at this stage. Thereafter, the full house is expected to conduct an article by article vote on the draft. To pass, each article must obtain a two-thirds majority. The whole process of discussing public suggestions, developing revisions, and article by article voting is set for completion in just one month, by January 13, 2015.

The CA Chair will then verify the bill related to the new constitution before submitting it to the President for signature and promulgation.

In summary, the calendar of action looks as follows:

These developments with such concrete timelines certainly give reason for hope, as mentioned earlier. By no means, however, do they guarantee that the deadline will indeed be met. Firstly, the rules of procedure came almost a month behind schedule. It is unclear whether this was even factored into the drafting the calendar.

Second, the calendar does not take into account the NC-UML coalition government’s plans to hold local elections as soon as possible, which by implication means in the middle of the constitutional process. The opposition, consisting of the UCPN (Maoist), Madhesi and other fringe parties strongly resists the proposal to hold elections in the near future. Conducting local elections any time soon, they argue, will likely delay the constitution-writing process. They accuse the ruling coalition of seeking to perpetuate the current centralized administrative structure and power relations of Nepal, which many hope will be re-defined through the new federal structure in new constitution. Wrangling over this issue has already drawn resources, time, and focus away from the constitutional process.

CA members are also skeptical  of the calendar.  As a UML lawmaker put it “a good calendar alone is not enough; a strong will power to complete the task is what matters”. If any lessons are to be drawn from the politics of the old CA it is that nothing is cast in stone. The calendar of the former CA was amended a dozen times to extend the term of the CA by additional two years. The absence of top political leaders at the CA meeting when the current calendar was endorsed is also a reason for concern due to the powerful influence they exert. Expectations must therefore be measured.

Further, the calendar does not seem to anticipate any obstacles in the negotiations ahead. This is rather shortsighted in a context with ideological divisions on many issues, as disputes over federalism have shown. In spite of the time lines, negotiations on many issues may drag, resulting in extensions as seen during the last process.

Complications are also likely to arise from the voting rules provided by the rules of procedure. For instance, proposals on any unresolved issues must be decided by a simple majority vote in the CA. However, a two-thirds majority will be required to pass each article of the final draft constitution. There is no guarantee that contentious issues, even if previously decided by the CA through simple majority, will receive the two-thirds majority in the final round of voting. The underlying assumption appears to be that the UML-NC coalition with a few fringe parties can garner the two-thirds majority needed at this stage, a risky assumption at best. What if some members rebel against their parties at the last minute? The absence of an official whip system makes floor-crossing, not uncommon in Nepali politics, a real possibility. The UML-NC’s proposal to institutionalize the whip in the new rules— which could have addressed this problem— was dropped when the Maoist –led opposition resisted it.

In addition, the rules of procedure do not propose any alternative solutions for resolving deadlocks outside the Assembly, such as via a referendum. This is a missed opportunity to provide for an avenue to overcome any impasse on divisive issues, while at the same time allowing greater ownership, legitimacy and popular involvement in the process. Surprisingly, the rules do not even anticipate a situation in which the CA fails to reach agreement on the revised proposals, following consideration of public views. These unanticipated scenarios would immediately throw the process off its tight schedule if they do arise.

Last but not least is the sheer size of the key committees of the CA—264 members in total, with the two procedural committees each having 191 members and the three thematic committees each with 73 members. The rationale for this numbers was to ensure that the 601 voices in the CA are proportionately represented within the Committees. The rules allow for the formation of sub committees. Yet there is concern that with such large numbers, not only will it take much longer to reach any agreements, but the chances of actually getting agreements are diminished.

The adoption of the RoP by the CA and setting of a calendar are milestones that deserve recognition. Yet for anyone familiar with Nepali politics and the history of this process, it is hard not to wonder whether the CA is, unadvisedly, setting high expectations that might damage its credibility should this complex process not proceed as planned.

Prabindra Shakya is associated with different NGOs in Nepal for research and advocacy on peacebuilding and human rights.