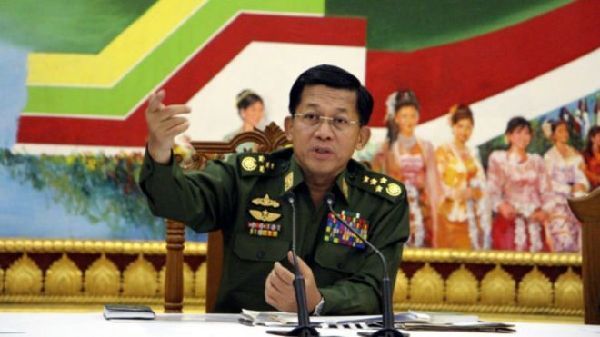 Myanmar's Commander-in-Chief of the Defense Services Senior-General Min Aung Hlaing (photo credit: China Daily)
<p>Myanmar's Commander-in-Chief of the Defense Services Senior-General Min Aung Hlaing Friday voiced support of constitution amendment on condition that the country becomes politically stable.</p><p>"We've never said not to amend the constitution, but we will do when time is appropriate and politically stable," Min Aung Hlaing told a press conference here.&nbsp;</p><p><span style="line-height: 20.4px;">He said he will not retire at age of 60 now when asked, adding that when eternal peace is achieved with armed groups, the military is likely to withdraw its 25-percent presence in the parliament.</span></p>
Read the full article here: Shanghai Daily