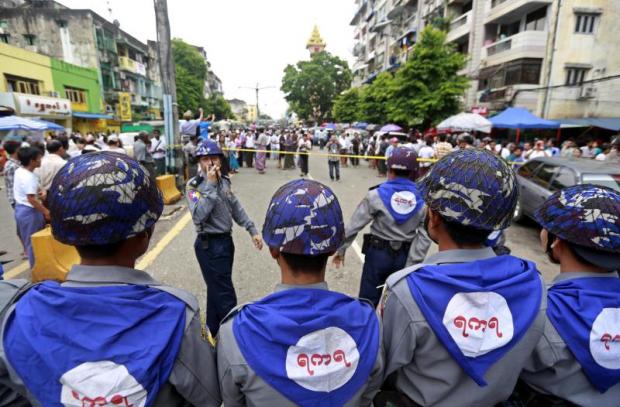 Myanmar riot police block the road during a protest in downtown Yangon, on Tuesday [phot credit: EPA]
<p>In what some thought could be a game-changer in the Myanmar political landscape, a move for constitutional amendment was unsurprisingly voted down in the Union parliament last Thursday.&nbsp;<span style="line-height: 20.3999996185303px;">It was a crucial vote for many pro-democracy forces, especially the National League for Democracy (NLD) which hopes to see its chairwoman Aung San Suu Kyi become the country's next president.&nbsp;</span><span style="line-height: 20.3999996185303px;">After the voting last Thursday, Aung San Suu Kyi was not surprised by the result and thinks that the unwillingness to support constitutional amendment can ultimately benefit the NLD. She said that "people are now crystal clear about who they have to support".</span></p>
Read the full article here: The Bangkok Post