Maintaining constitutional and political stability in the context of crisis: Liberia’s challenge 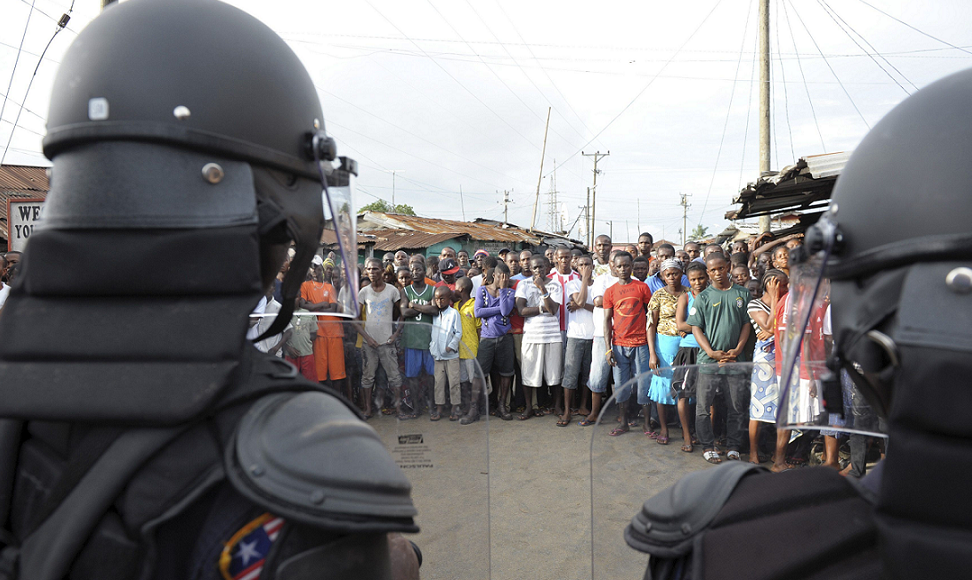 Liberian security forces stand in front of protesters after clashes at West Point neighbourhood in Monrovia, 20 August 2014. Police in the Liberian capital Monrovia fired live rounds and teargas on Wednesday to disperse a stone-throwing crowd trying to break an Ebola quarantine imposed on their neighbourhood. Reuters

Thanks to concerted domestic efforts backed by international goodwill, the rate of Ebola infections in Liberia has dropped considerably in recent weeks. A Ministry of Health situation report suggests that less than 200 persons are currently in treatment centers either as suspected, probable or confirmed cases. This represents a significant improvement compared with the situation in September when nearly 500 persons were admitted with over a hundred others flooding to hospitals. Yet, authorities insist—and perhaps rightly so—that this positive development must not breed complacency—at least not before the disease is completely eradicated from the country.

To realize this goal, President Sirleaf  on December 4 issued Executive Order No.65 banning mass gatherings in Monrovia in relation to senatorial elections whose exact date has been  a subject of legal controversy until recently when Liberia’s Supreme Court rejected a petition prohibiting the elections. The elections, which should have taken place in October, were suspended due in part to Ebola - and the related state of emergency in place then. With the recent decision by the Supreme Court to lift the prohibition against the elections, the ballot is now set for December 20.

President Sirleaf argues the Order is necessary to ‘strengthen the government’s efforts to contain the spread of Ebola.’

This is just one of many actions by the President in recent weeks generating backlash not only from ordinary Liberians but also from the Legislature. Earlier in October, she requested the Legislature for authority to take extra measures needed to curb Ebola. These included, inter alia, restrictions on freedom of speech, movement, assembly and religious worship—measures which, many argue, clearly threatened core fundamental rights protected by the Constitution.   She contended that these measures are crucial to prevent the media and politicians from misrepresenting the government’s goal on the Ebola struggle and thereby hampering the effectiveness of its efforts.  In the same request, the President requested the Legislature to extend the state of emergency declared under Article 86b of the Constitution and under which many constitutional guarantees and individual freedoms had already been curtailed. Lawmakers turned down her request although allies in the legislature argued that as the emergency was still in place, the president already had the mandate to invoke such powers without a specific grant of additional mandate from law makers.

This double snub has, apparently, put the two arms of government on a collision course and Executive Order No 65, it seems, is the President’s response to what she may conceive to be obstructionist lawmakers. A number of legislators and political parties have described the President’s action as reminiscent of the days of junta rule, and decried the measure as ‘draconian’ and ‘tyrannical’

‘The President seeks to exercise by way of Executive Order emergency powers which have been denied her by the legislature’, read a statement from opposition party the Alternative National Congress, which also denounced the Order as an ‘unconstitutional exercise of emergency powers.’

Others are concerned these increasingly unconstitutional measures are too disproportionate to the present danger posed by Ebola to be justifiable. They perceive, rather, a malicious plan aimed at rigging the senatorial elections in ways that are reminiscent of the 1985 elections which President Samuel Doe supposedly rigged with the aid of similar measures.

As we wait for the Court’s decision, these developments – the request for additional powers, the senatorial election petition and the executive order— raise a number of interesting constitutional issues that have until now not been anticipated in the context of the country’s current constitutional reform process.

The first is ensuring constitutional continuity for state institutions in crisis periods. What does the constitution say about powers of state institutions during periods of emergency?  According to Article 86 (b) a state of emergency may be declared only during the outbreak of war or a civil unrest that amounts to ‘clear and present danger’. The current situation in Liberia is far from a war, but civil unrest loomed as citizens’ responses to public health measures to contain Ebola threatened to spiral out of control.  These reactions, for example in the resistance to the quarantine of the slum community West Point, were agreed to be of ‘clear and present danger’ to the state in their defiance of public health measures necessary to prevent an epidemic.

To some, the current state of affairs called for a negotiated transition with all political actors and suspension of the electoral process due to such clear and present danger. Even after the state of emergency, a group of citizens still pressed for what they called a ‘sovereign national conference’. But with the Supreme Court rejecting their petition, it is now clear that crisis situation does not call for a complete deviation from sovereign processes but questions still remain regarding how the State of Emergency should affect elections and transitions of power: under what conditions exactly can elections be postponed, and what measures must be taken to ensure democratic process is served?  The Constitution is unfortunately silent in this regard.

Another question is whether there should be the same measures applied during all emergencies.  This brings us to our next constitutional issue and that has to do with the scope and limits of the exercise of additional powers granted in the context of a state of emergency. Dissecting this has been a great challenge for Liberia’s political actors as there has been a massive outcry from the public. Some activists argue the measures are too harsh for an emergency under a health crisis, and even suspect that the initial request in October – particularly measures against free press, free expression and assembly - had other motives than the health crisis. Alvin Wesseh, a student activist from the University of Liberia, for instance, told a protest gathering at the Capitol that the regime ‘wants to close our mouths and sell our oil’.

On its face, this seems to be a strong and apt check on executive power.  But that it has functioned well this time - bringing the state of emergency measures into the spotlight of public debate - is due to the composition of the current legislature with different parties and interests. Yet, Liberians have experiences from immediate past regimes when the executive controlled the legislature, which acted as a rubber-stamp without substantial discussion nor debate on proposals from the President.  It is not impossible such control could recur in Liberia, and this again argues in favour of a more detailed State of Emergency provision to constrain too much discretion.

Related to this is the constitutionality of Executive Orders issued outside the context of a state of emergency that potentially infringe core fundamental rights. This issue has come to the fore as President Sirleaf attempted to short-change the Legislature by issuing an order enforcing what was snubbed, but specifically in Monrovia. While it is a case in the Supreme Court, public opinion has already rendered a judgment declaring it unconstitutional. While the Constitution again provides little guidance on the permissible scope for executive orders, the tradition in Liberia is that executive orders are issued when a situation requiring legislation  cannot wait for long legislative processes, but an executive order infringing on fundamental constitutional rights seems alien, and as stated above brings fears of a return to autocracy.

The above issues present strong cases for constitutional reforms dealing with emergency situations, and the central question I have drawn from the recent political and constitutional crisis is how we can maintain constitutional and political stability in such situations. For instance, do we need the same state of emergency during a health crisis as we will during a civil unrest or violence? What are the limitations and restrictions required for different emergencies? Hopefully this is an issue which will now be taken up by the Constitutional Review Committee , and that the public will play their part in ensuring it is included in the constitution reform debates.