Liberia’s constitutional review process: why it matters to women 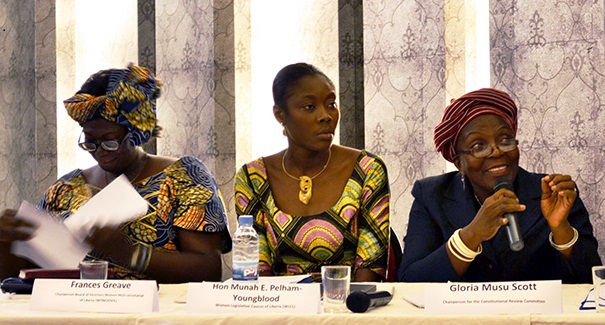 Compared to most of its contemporaries across Africa, Liberia, historically, has stood at the forefront of women’s political emancipation. In 1946 Liberian women gained suffrage to vote and participate in public elections, making it one of only six African countries, including Cameroon, South Africa, Senegal, Togo, and Djibouti to have granted women the franchise as far back as the mid-twentieth century. It placed women at the highest echelon of the peace negotiation process for their role in mediating the warring factions during the violent conflict; it was the first African country to elect a woman as President. Women have also held key positions in government ranging from heading key ministries like the Justice Ministry to heading the Constitutional Review Commission (CRC).

Further, the current constitution— though drafted in what one would not imagine to be the most gender friendly language—has a bill of rights with strong equality and non-discrimination provisions aimed at protecting women from all forms of social, economic and political exclusion. Article 11(b) guarantees individual freedoms and fundamental rights to ‘all persons […] irrespective of sex’ while Article 81 unconditionally grants ‘any citizen […] the right to canvass for the votes for any political party or any candidate at any election’.This effectively eliminates past practices which conditioned the right to franchise on property ownership, thereby leaving women—who were the ones most affected by a discriminatory property regime—out of politics.

Reality, however, continues to fall short of expectations.Women in Liberia have continued to endure marginalization and exclusion in spite of this history. Even with a woman at the helm of state, women fill only 30% of current cabinet positions. The figures in Parliament show an even more disturbing trend in women’s political representation, dropping from 14.8% in the first post-war legislature to 11% in the current legislature. At the sub-national level, the figures are just as alarming; women make up only 2.5% of paramount chiefs and 4.5% of district commissioners. Further, while some countries like Zimbabwe are moving on to the gender parity debate, Liberia is still on the gender quotas debate. Even then, it is hard to tell what the outcome will be. Legislators in the currently male-dominated legislature recently deprioritized gender parity as a legislative issue, arguing that it is a matter for a constitutional referendum.

What explains this gap between theory and practice?

‘Social structures built with conservative rules [are placing] women in a single corner and [limiting] their roles to housekeepers’, says for instance, a member of the Association of Female Lawyers of Liberia.

‘The state is not doing much to implement its own policies, and women still suffer discrimination’, says another women’s rights activist, in relation to the non-implementation by the state of a National Gender Policy aimed at empowering women through education and employment. ‘…only laws or the constitution will make it binding [as] with that we can sue the government for not obeying the constitution’, she adds.

Even with the franchise and the right to vote extended to them, women seeking elected office in Liberia continue to get paternalistic and condescending treatment on the campaign trail, such as being ‘frequently asked during campaigning about their marital status and number of children they have’, says Kulah Turay, leader of the women’s wing of a political party, the National Union for Democratic Progress.

This indicates that while Liberian women may have achieved much in electing the first female president in Africa, the real struggle for political equality is still far from won.

This is why the ongoing constitutional review process has become such an important development for the women’s movement, providing an opportunity to reopen the debate on the status of women and seek more comprehensive gains.

How are women engaged in the ongoing review process?

Following President Johnson-Sirleaf’s launch of a process to review the Constitution in 2012, and the decision to make the process as participatory as possible, a powerful women’s movement, which sees the process as a beacon of hope has emerged. The movement is resolved to ensure that their views are not given only cosmetic treatment but actually integrated in the final Constitution.

Recognizing the importance of the process for women, the Constitutional Review Commission (CRC) has taken a number of steps to maximize their participation. The most important of these is the establishment a gender unit occupied by women activists to advise the Commission on women’s needs and on the key issues affecting them, with a view to reflecting these in the Commission’s recommendations for a new or amended constitution.

Constitutional agenda of the women’s movement

Women are expressing a range of demands which can be grouped into three broad categories. The first is political representation and participation. As such, they wish to see affirmative action constitutionalized and other women-specific provisions in the constitution to give greater meaning to their fundamental political rights. They are advocating for a quota system that will give women at least 30% representation in both elected and appointed positions in all public offices. This, in fact, is the main issue on the political agenda of the women’s movement.

The desire for great socio-economic opportunities is a second issue.An analysis of what these entail might seem endless, but Liberian women see access to education, employment and medical care as critical. They believe that a specific emphasis in the constitution on women’s rights to access the above through affirmative action provisions is a must.

Third is the issue of inheritance rights. Of particular concern to rural and married women subjected to a patriarchal customary system that denies them inheritance rights, the issue has become divisive. Custodians of tradition, such as the National Traditional Council have issued a stern warning against tampering with traditional customs. Progressive activists on the other hand argue that this is fair game for consideration in the constitutional review process and should not be left with customary authorities. The women’s demands are gaining momentum and likely to generate sympathy from within and abroad. Yet, it would be naive not to assess the fertility or readiness of the political and social environment for these demands.

There are, for instance, critics of the women’s campaign who argue that it is an elite urban based movement that does not always reflect the views of all women. They argue that many rural women, while wanting reforms to the inheritance regime in place, are for the most part happy with the status quo.

The quota battle, as well, remains a long standing one. Ahead of the 2005 election, the 30% rule was introduced by the National Elections Commission in guidelines signed by political parties. Though not legally enforceable or mandatory, some parties made serious efforts to ensure that women constituted at least 30% of their list of candidates. A Gender Participation Bill later grew out of this but the campaign to pass this into law continues to suffer setbacks, with the Legislature—as mentioned earlier— recently deprioritizing it as a matter for the CRC and ultimately a referendum. Even then, any amendment bill that emerges from the review process must first be approved by the Legislature before it goes to referendum. The problem here is that women, as indicated earlier, currently constitute only 11% of  the body, whose male majority, it is hard to say, are in any way sympathetic to the women’s cause, seeing how they have treated the quota issue to date.

As such, while this constitutional process matters to women and they are mobilizing in full scale to make the maximum gains out of it, a lot is left to be determined by events in the weeks and months ahead, which may not necessarily be within their control.

[1] Ibrahim Al-bakriNyei is a policy analyst at the Governance Commission of Liberia. The views expressed in this article are solely those of the author.