Lack of Money or Lack of Political Will: What is Stalling Constitutional Reform in Liberia? 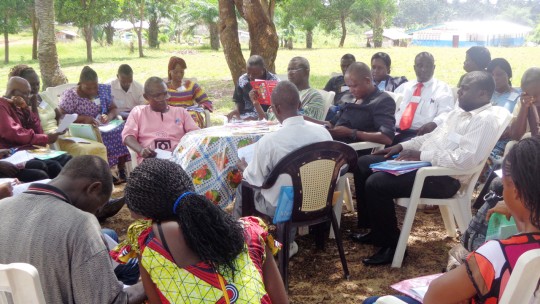 It is nearly three years now since Liberia’s constitutional review process was launched with the establishment of the Constitution Review Committee (CRC) by the President. It came after several demands for constitutional reform towards more inclusive and participatory governance. In addition, there seems to be a consensus among Liberian technocrats and international development partners that the extant legal framework – the constitution and age-old pieces of legislation, for example, laws on land ownership, citizenship, or local government - do not support proposed reform measures intended to strengthen democracy, good governance and peace.

The CRC began work immediately after it was established in 2012. It quickly launched campaigns and organized symposia to raise public awareness about the process. By the end of 2013 the Committee had convened town hall meetings with citizens in several districts, but the main opposition, the Congress for Democratic Change, called for a more substantive process of nationwide consultations and warned that it should not be rushed. Yet, the process has not gained momentum and there is little debate either among local citizens or among public figures and intellectuals. This weak response and lack of substantial public engagement was worsened by the outbreak of the Ebola virus. The ravages of Ebola indeed interrupted numerous activities in Liberia, yet the constitution review process was long stalled before its outbreak. The constitution review process has lost public visibility, as bureaucracy and the struggle to secure additional funding have consumed the Committee. Therefore very little has been done, beyond small group discussions with selected participants, to engage the Liberian public actively and to drive the process to a popularly accepted conclusion. What then have been the challenges in moving forward with the constitutional reform? What is the level of political and financial support from the government to the citizens and international partners driving the process?

Political Will: How is the Political Leadership Pushing the Process?

To back track, constitutional reform has been an issue that Liberia’s political leaders have tinkered with since the end of the 2003 Accra Peace Conference that returned the country to stability. Unlike the issues of security sector reform or transitional justice and disarmament, no timetable was set for a process of constitutional review or reform – neither during the peace conference nor during the transitional period. Thus, the issue has been left to the discretion of the sitting government. As argued earlier, missing the opportunity to set the timeline of the constitutional reform process at the conference - convened under the auspices of the ECOWAS, the African Union and the UN - has left any future reform efforts vulnerable to the domestic political climate. The first reform attempt was made in 2009 with the establishment of what was then the Constitutional Reform Taskforce. With no funding, however, the Taskforce did no more than designing work-plans that were not implemented. This was followed by a referendum focusing on electoral issues and the age limit for Supreme Court judges. The referendum which was held in August 2011 was widely criticized as self-serving and that essentially aimed to eliminate political competition ahead of the 2011 general and presidential elections.

Against this background, the ongoing constitutional review process seeks a more comprehensive review of the 1986 Constitution.

For the constitutional review to be a sovereign national project, national resources should be made available and the process should be driven by national actors. Yet, in Liberia the political leadership has shown little commitment to advance the process that continues to lag behind the pace expected by the public, resulting in frustration and disinterest. The lack of political support to the CRC has also influenced the level of financial resources the CRC receives from the government to fund its operations and pay its staff. It was no surprise in the last fiscal year that the CRC was among those government agencies whose budgetary appropriations were reduced.

From the outset, the Liberian government has instead transferred financial responsibility onto external donor organizations only to entrench a culture of dependency on foreign aid. International support has proven essential to provide the Committee with financial and technical support to organize town hall meetings, conduct research or to map good practices. However, experience on the ground has shown that support comes at a price. From varying institutional priorities to bureaucratic hurdles, compliance with donor regulations has often become burdensome for the reform process. Meanwhile, frustration has grown and many feel that the government pays only staff salary and leaves the rest of the work to donors, who are just ‘kicking us here and there’. The fact that the CRC has to wait for months to receive promised donor financing is just one example of many. As a result, key activities of the constitutional review process have been delayed, including undertaking extensive research or organizing major public forums. A key example of how funding constraints hinder the process is that the proposed National Constitutional Conference could only be attended by a small number of delegates and would last just for a few days.

In addition, outcomes of donor-financed programs are usually controlled under the proverbial rule ‘he who pays the piper dictates the tune’. The operational and administrative procedures, program planning and timing of Liberia’s constitutional reform process are all dictated by donor organizations. Thus, the outcomes are foreseeable. The constitutional structure, principles and the very direction the country is to take is getting out of the hands of Liberians. A telling example is how many Liberians are strongly against the removal of the controversial ‘Negro Clause’ from the constitution; however, some donor organizations are willing to finance only a process that guarantees its removal.

A constitutional reform process will only gain popular legitimacy in the end, if it is known, debated and supported by Liberians from all walks of life. This means that the constitutional reform process must engender debates nation-wide on the key issues - beyond organizing controlled workshops and placing suggestion boxes in public places. The current case has not benefitted from substantial debate as major political parties and civil society organizations have not demonstrated much enthusiasm and interest in the ongoing review process, except for participating in workshops organized by the Committee itself. Perhaps, parties and civil society organization are waiting to see where the reform is headed before fully engaging in the process. Yet another reason is that “political parties have not been extensively engaged by the CRC. For parties to really participate and debate issues on the constitution, the CRC needs to create more platforms for engagements” according to Amos Tweh, leader of the National Youth Congress of the ruling Unity Party.

Three years after the launch of the constitutional reform process, the expectations and the agenda of Liberian parties and civil society organizations are yet to be seen. As these groups represent the political and social interests of Liberians in many ways, their active participation in the process would not only intensify the debate but would also generate enhanced citizen participation - possibly making constitutional reform a national priority warranting the full support of the government.

From the lack of political and financial support to the Ebola outbreak, Liberia’s much-delayed constitutional review process has been hindered by a variety of factors. Yet, the Committee’s three-year mandate must not come to an end without even submitting an amendment proposal to the Legislature that must approve it one year before it can go for referendum in line with Article 91 of the Liberian Constitution. With the National Constitution Conference currently in the making, more is expected for the revival of the process and the awakening of the political leadership to the urgency of constitutional reform.

The extension of the Committee’s mandate to the end of 2016 presents an opportunity to raise awareness about the central issues of the reform and to conduct extensive public consultation to create an inclusive constitutional review process. As a prerequisite, the government will need to assume full responsibility of the process. Mobilizing citizens around issues of constitutional relevance will be key to a democratic constitution. This is where civic engagement and sustained involvement of the civil society is critical and should be supported by the government.  Any process short of full national support and citizen engagement will ultimately stall in the bureaucracy of international donor organizations, which lacks the flexibility to respond to domestic political and social dynamics, as the case of the Liberian constitutional reform has demonstrated it.

Lastly, as two previous reform efforts have failed in just five years, this third initiative is hoped to deliver a more comprehensive constitutional review provided it is debated, agreed upon and supported by Liberians. Failing on this could lead to critical setbacks in the governance reform as a whole posing a risk even to the peace and stability of Liberia.