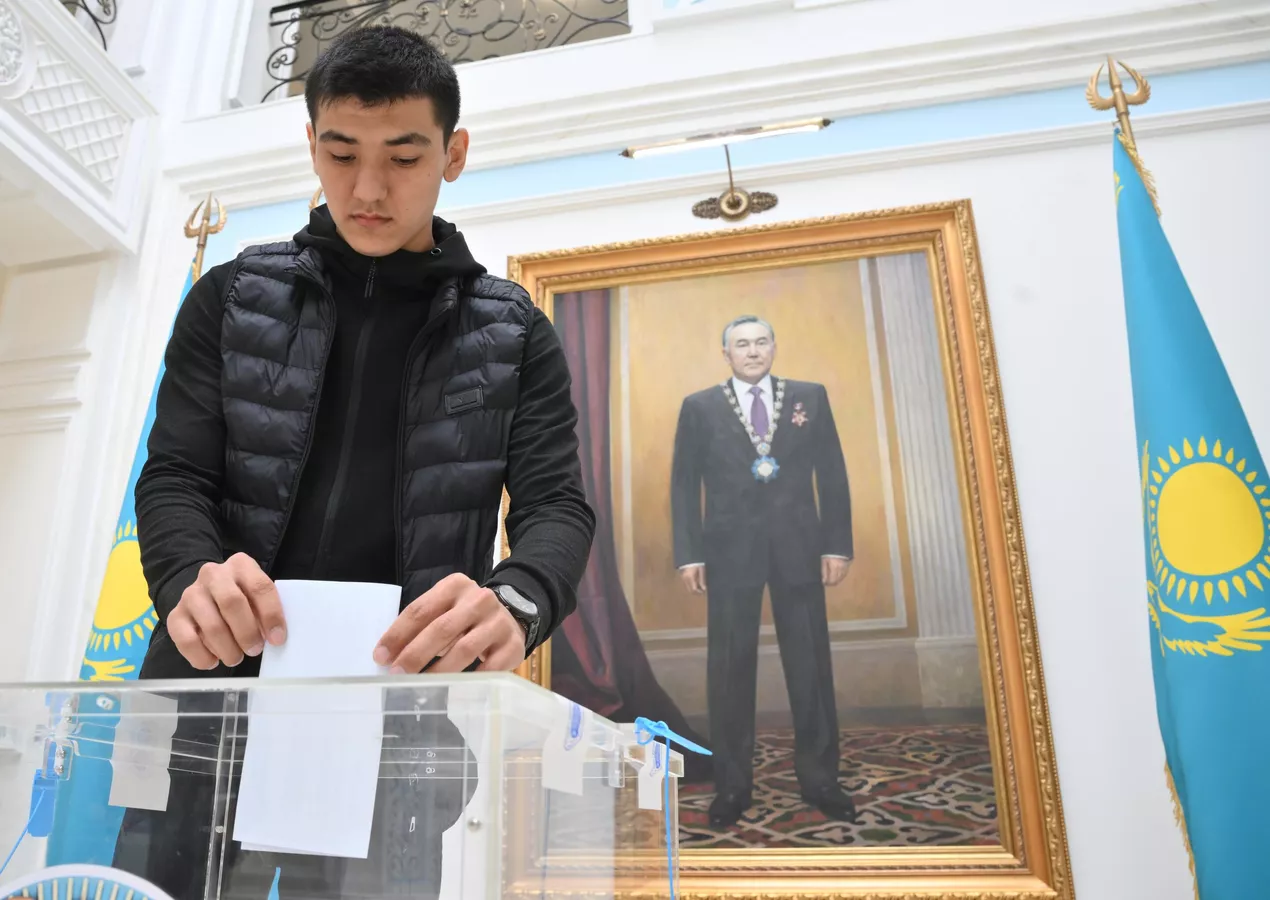 On 5 May President Kassym-Jomart Tokayev issued a decree to hold a referendum, leaving citizens with only one month to learn about 56 proposed changes in 33 articles (one-third of the Constitution). The amendments lacked political substance despite the president's pledges to reduce his powers, balance the political system, and empower the parliament. Instead of reforming the political system, Tokayev used the referendum to gain public support, increase his legitimacy, and appease protestors. We may see the reimposition of a personalistic regime, only now led by the second president instead of the first, leaving little chance for democratic transition in a near or medium term – writes Dimash Alzhanov

In January 2022, thousands of people across Kazakhstan took to the streets in peaceful protests initially sparked by a rise in the cost of fuel, but which quickly expanded to demands for political change. In particular, the protestors wanted to eliminate the continuing influence of the first president Nursultan Nazarbayev (who had ruled for over three decades) in the country’s politics and economy. Although the presidency was handed to his successor Kassym-Jomart Tokayev in 2019, Nazarbayev still controlled key political decisions as lifelong head of the Security Council. The protests escalated, and to save the regime, Nazarbayev (after receiving guarantees of personal security) was forced to hand over the post of head of the Security Council to President Kassym-Jomart Tokayev, who called on the Collective Security Treaty Organization – a Russian-led military alliance – and the army, which violently suppressed protests.

In light of these developments, Tokayev's already weak legitimacy significantly suffered, and further stabilisation of the regime was impossible without responding to society's demands for comprehensive political change. On 16 March, the President announced a reform platform at a State of the Nation address. Entitled, New Kazakhstan: the path of renewal and modernisation, Tokayev announced the need to amend the Constitution for further democratisation, political decentralisation and transition “from a super-presidential form of government to a presidential republic with a strong Parliament.” By the end of March 2022, the President established a working group of 19 members representing state institutions and ruling-party affiliated experts, led by the Deputy Head of the Presidential Administration and the Minister of Justice (both presidential appointees). According to the decree, the working group was mandated to develop constitutional amendments aimed at implementing the President's State of the Nation address.

On 5 May, without providing adequate time for meaningful and inclusive public consultations and debates within and outside the Parliament, the law on constitutional amendments was published for public scrutiny, just one month before a planned referendum. The law proposed 56 changes in 33 articles of the Constitution (one-third of the Constitution), mainly consisting of superficial changes, which neither provide for the separation of powers nor empowerment of parliament to balance the presidency.

In purely presidential republics, the popularly elected president is the head of state and also heads the government. In this regard, the proposed amendments did not reflect President Tokayev’s pledge to change the form of government. And, even if we agree that the transition from a super-presidency meant the reduction in the president's powers, then, in this case, the amendments do not correspond to Tokayev's statement. From the excessive list of presidential powers contained in the Constitution (Art. 44), only the right to cancel or suspend the acts of akims (governors and mayors) of regions and cities was excluded (from Art. 88). Since the president retains the right to appoint and dismiss the akims, which undermines their ability to make decisions independently, the proposed amendment does not make a significant difference.

As for a "strong parliament", under the current semi-presidential form of government, this could have meant the transition to the premier-presidential model (whereby only the parliament, and not the president, can dismiss the government), and with the parliament playing a significant role in lawmaking, and in forming, controlling, and oversight of the government. We see an example in the 2014 constitutional reform in Ukraine, when the position of the prime-minister and the Verkhovna Rada was strengthened in respect of the president, contributing towards a more balanced semi-presidential system.

Instead, the amendments propose to strengthen the quality of parliamentary control over the execution of the budget by obliging the Majilis (lower chamber) to hear reports of the Supreme Audit Chamber twice a year (Art. 56.3-1). Although the Constitution already empowers the parliament to approve the government’s proposed budget under Article 54, in reality, it lacks the political power to make changes and additions in the budget and exercise effective oversight through committees independently. Similarly, the right to hear reports on the quality of budget execution twice a year expands the formal functions of the parliament but it does not lead to any real increase in its powers and independence.

Despite demands from civil society to abolish the upper chamber, President Tokayev proposed only the reduction of his quota of directly appointed senators from 15 to 10.

Despite demands from civil society to abolish the Senate (upper chamber), President Tokayev proposed only the reduction of his quota of directly appointed senators from 15 to 10 (Art. 50.1). Now five will be nominated by the Assembly of People of Kazakhstan (ANK) – an advisory body under the president. The remaining 34 senators, as before, will be elected by local councils, consisting of approximately 83% councillors from the presidential party Amanat (formerly Nur Otan, but rebranded after the January protests). Considering the president's right to dissolve any local council, this, in principle, excludes the election of senators objectionable to the president. Having retained the Senate, Tokayev de facto preserves the presidential control over lawmaking and appointments of heads of different institutions. The upper chamber lost the right to initiate bills; however, it was empowered to approve or reject bills passed by the Majilis (Art. 61.4).

In addition, the amendments reaffirmed the president's powers to interfere in the legislative process by objecting to and changing the text of bills, which the parliament can only override by three-fourths of the votes of both chambers for constitutional laws and two-thirds for ordinary laws (Art. 54.2). Moreover, under a state of emergency (which the president can impose discretionally) or emergency situation, the government is granted the right to adopt a temporary decrees with the force of law on a wide range of topics without approval by parliament (Art. 61.3). This might create a situation similar to Hungary's slide into executive rule by decree, which was criticised for its undemocratic nature by international institutions, including the Council of Europe, United Nations and OSCE.

The prohibition of membership in a political party for the Central Election Commission (CEC) was also introduced (Art. 23.2). However, this step is insufficient to professionalise the CEC and ensure its neutrality toward all election contestants. In the current composition of the CEC, all seven members are from the Nur Otan party and the novelty proposed by the president does not solve the main problem: the political dependence of the chairman and two commission members on the president because of their direct appointment. The same applies to the remaining four members appointed by the two chambers of parliament, where the presidential majority is guaranteed by the non-democratic and manipulative character of Kazakh elections.

The amendments also constitutionalised the status and powers of the ombudsperson for human rights under Article 83-1. Despite the article providing the ombudsperson with immunity from criminal prosecution and administrative penalties, his/her immunity can be waived by the Senate (Art. 55.3). Moreover, the nomination of the ombudsperson is by the president with consent by the Senate (Art. 55.2). Considering the dependence of the latter with regard to the president, such an appointment procedure does not contribute to the institution's independence.

Consequences of the new electoral system

The amendments abolished the quota of 9 MPs elected by the ANK in the lower house and changed the proportional electoral system to a mixed-member proportional one. As a result, the number of seats in the lower chamber was reduced from 107 to 98 (Art. 50.3). Out of these, 68 seats will be elected from a single nationwide constituency by closed-list proportional representation using a 5% threshold, and the remaining 30 from single-member districts (SMD) using first-past-the-post.

Some of the electoral changes are seen as returning Kazakhstan to the pre-2007 mixed electoral system combining two-round majority and proportional components but with additional undemocratic features.

Such changes, in many aspects, are seen as returning Kazakhstan to the pre-2007 mixed electoral system combining two-round majority and proportional components but with additional undemocratic features. Firstly, the reduction of parliament size negatively affects representation and the capacity of the assembly to establish sustainable communication channels with the electorate. Secondly, due to its majoritarian component, the mixed-member proportional system may result in the fragmentation of the lower chamber. This, in turn, can subsequently decrease the number of "effective parties" in the parliament and hinder the development of strong party organisations. Thirdly, these 30 SMDs are disproportional to the population (18 million), each representing 600,000 people, and on average equal to the territory of Hungary. Finally, as a safeguard, the current acting imperative mandate was supplemented with a recall mechanism against SMD MPs (Art. 52.5), which is also at odds with the principle of representation and primarily aimed at weakening their independence.

As we can see, by retaining control over the election commission (responsible for party/candidate registration and vote counting) and proposing a small number of parliamentary seats for contest at election, the authorities secured their ability to ensure predictable voting results. Therefore, adopting these abovementioned changes to the electoral system does not challenge the regime's status quo. Moreover, by instituting changes such as eliminating appointment of some members to the lower chamber of the parliament and allowing self-nomination of candidates, the authorities aim to meet OSCE Office for Democratic Institutions and Human Rights recommendations and get a positive assessment of the upcoming elections by the international community.

The referendum took place in the atmosphere of ongoing pressure on political opponents and complete control over the voting by the authorities. On 6 June, the amendments were approved by 77% with a turnout of 68%, which became the sixth time the Constitution has been amended since adoption. By contrasting himself to the negative image of the first president Nazarbayev and abolishing Nazarbayev’s constitutional privileges, Tokayev managed to retain the entirety of presidential power and strengthen his legitimacy through the referendum. Even though the constitutional privileges of the first president regarding unlimited terms in office (Art. 42.5), and his powers and status as the founder of independent Kazakhstan (Art. 46.4 and 91.2) were abolished, the constitutional law "On the First President of the Republic of Kazakhstan - Elbasy" so far has not been revoked. It continues to provide Nazarbayev and his close family members formal immunity from criminal prosecution and inviolability of their assets.

In general, the substance of the amendments and the referendum results show the reimposition of the personalistic regime now only led by the second president, leaving little chance for democratic transition in a near or medium term.

Dimash Alzhanov is a political analyst and founder of the Erkin Qazaqstan project.

Click here for updates on constitutional developments in Kazakhstan.