Innovations of the Draft Constitution of Cote d’Ivoire: Towards hyper-presidentialism? 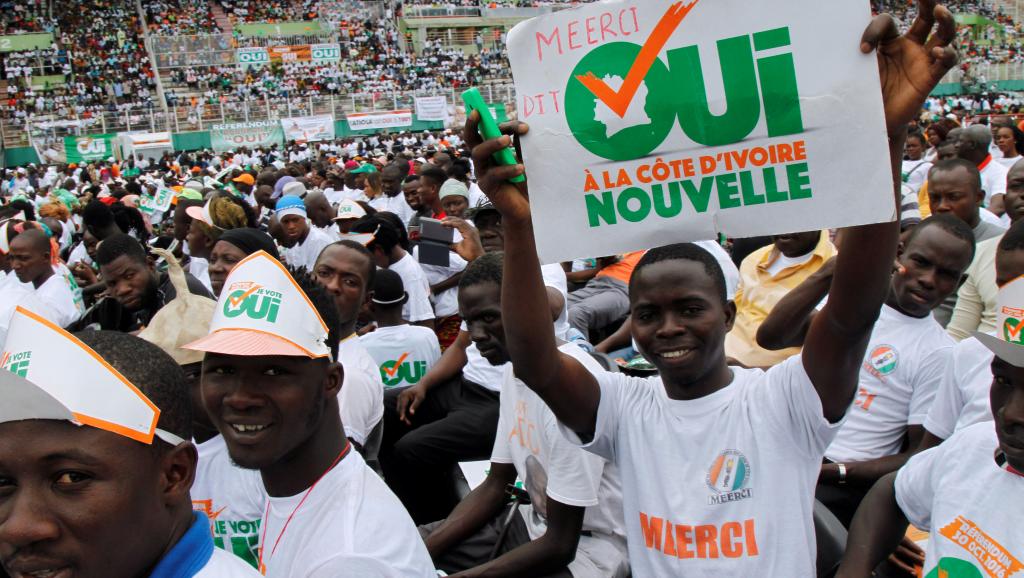 Supporters of the 'yes' for a new constitution campaign (photo credit: REUTER/Luc Gnago)

While the 2016 draft Constitution of Cote d’Ivoire addresses the controversial issue of nationality requirements for the presidency and includes certain substantive improvements, overall the institutional reforms will likely strengthen the power and position of the President – writes Lobe.

During his 2015 electoral campaign for reelection, President Alassane Ouattara recalled his intention to amend some provisions of the 2000 Constitution as he announced at the beginning of his first term. The reform pledge particularly focused on the nationality requirements for the presidency, which had caused political and security crises. However, it appeared very early that his real intention was not to amend the existing Constitution but to write a new one.

The drafting process for a new Ivorian Constitution started with the adoption of a draft organic Law on the organisation of a constitutional referendum by the Council of Ministers in April 2016. The National Assembly adopted the Law on 22 July 2016, with a specific modification. The modification ensured that the draft Constitution must be approved in the Assembly with a 2/3 majority before its referral to a referendum. While the existing constitution does not regulate the adoption of a new constitution, all amendments are required to be approved with at least 2/3 majority in the National Assembly. Considering the presidential dominance of the drafting process, where the President unilaterally appointed a Panel of Experts to draft the new constitution, the modification was a manner for parliamentarians to make the process of elaboration of a new Constitution slightly more inclusive.

The Panel was expected to finalize its work by June 2016 but it was only on 23 September that it submitted its proposals to the President of the Republic. The Council of Ministers adopted the proposals on 27 September. As required in the organic Law on the organisation of a referendum, the draft Constitution must be approved in parliament. It is in this context that President Ouattara presented the draft Constitution on 5 October 2016 at the opening of the second ordinary annual session of the National Assembly. The Assembly overwhelmingly approved the draft on 11 October, with minimal opposition. The Assembly discussed the draft for a few days and only made minor changes. The constitutional referendum will be conducted on 30 October 2016.

This piece follows up on an earlier contribution focusing on the drafting process and discusses the main substantive innovations of the draft Constitution.

Changes to the conditions of eligibility to the Presidency

The reform of the conditions of eligibility to the presidency is one of the most contentious issues of the draft Constitution. Ouattara pledged during the 2015 electoral campaign that he would work towards the reforming of the nationality requirement, where candidates must prove that they are Ivorian born of a father and a mother who are themselves Ivorian by birth. Under the draft Constitution, a candidate must be ‘exclusively Ivoirian, born of a father or of a mother Ivorian by birth’. The nationality requirements in the 2000 Constitution are too restrictive in a ‘melting pot’ country and particularly affect Ivoirians living in the northern and eastern parts of the country, whose family ties often cross into neighboring countries. The requirement therefore created a sense of exclusion and marginalization and was considered as one of the causes of the 2002-2004 civil war and the subsequent division of the nation into two for eight years.

In addition, the draft Constitution lowers the minimum age limit for presidential candidates to 35 years and abolishes the upper age limit, which is currently 75 years. Ouattara is 74 years old and would have been unable to run for the presidency in 2020. Overall, the conditions of eligibility contained in the draft Constitution are shorter. For instance, there is no more reference to the health status of candidates as is the case in the 2000 Constitution. With Ouattara’s age, this condition could have been a potential hindrance. The next Electoral Code may elaborate on the comprehensive conditions of eligibility to the presidency.

An executive with three organs

The draft constitution establishes a new office of the Vice President, who will become the second state personality. Under the current constitution, on the death or incapacity of the president, the President of the National Assembly takes over and presidential elections must be conducted within 90 days. This provision, which was first introduced in the Constitution of 1960 in the 1980s, was clarified in 1994 following a succession crisis in the aftermath of the death of Houphouët-Boigny between the then Prime Minister, who happened to be Ouattara, and the President of the National Assembly, Henri Konan Bedie. Under the draft Constitution, the President and Vice-President will run on a joint ticket and the latter will replace the former in case of a vacancy, regardless of the cause.  Awaiting the first joint election, the President will appoint and can dismiss the Vice President. The current President of the National Assembly does not seem to have a personal interest in opposing the reforms as his term will end in December 2016 with the term of the Assembly.

The establishment of a Senate

The idea of forming a Senate was already considered by President Henri Konan Bedie in 1998, but was not included in the current Constitution. Under the Third Republic, the Parliament will be composed of two legislative chambers: the National Assembly and a new Senate. The Senate is expected to represent the interests of territorial collectivities and Ivoirians living abroad. An organic law will determine the number of members, conditions of eligibility and appointment. The President will appoint a significant proportion of the members.

The two chambers share legislative functions and must approve all laws, including those relating to the budget. In case of persistent disagreement between the two chambers, the President of the Republic can request the Assembly to adopt definitively the law.

Strengthening the protection of the rights of vulnerable groups, the opposition and CSOs

The bill of rights in the draft Constitution contains 47 articles, compared with just 28 in the 2000 Constitution, and strengthens the rights of vulnerable groups, particularly children, women and persons with disabilities. It makes the right to education compulsory for children, boys and girls. The prohibition of child labor further lays the background for the implementation of the right to education. The draft also requires the state to promote women’s participation in public affairs, the modalities of implementation of which must be given effect in subsequent laws. Furthermore, the state should act to ensure gender equality in employment, and encourage women to occupy posts of responsibilities. Considering that the draft does not establish a specific organization dedicated to promoting women’s rights, this will be a mission for the ministerial department in charge of women’s affairs.

One of the innovations of the draft Constitution is the recognition given to opposition parties and to civil society. In addition to the public funding all political parties will receive, the President could consult opposition parties on any issues of national interest. The possibility of consultation is discretionary to the President and the draft Constitution does not establish a platform for such engagement. Civil society also gets a place of choice in the draft Constitution, which specifically recognizes them as ‘a composite of the expression of democracy’. Although this provision is not clear on the exact role of civil society and scope of their intervention, the recognition as important political stakeholders is already a victory for such groups.

Despite the overwhelming support for the draft Constitution in the National Assembly, some opposition parties continue to reject the reform process as non-inclusive and hasty and the outcome draft as a pretext to enhance the authority and continued influence of the person of President Ouattara.  In particular, the deletion of the upper presidential age limit, the health status of candidates, and the lowering of the amendment threshold may pave the way for a subsequent amendment for a third term or an extension of the current term for the President. When the next planned presidential elections occur in 2020, President Ouattara will be 79 years old. Under the 2000 Constitution, he will not be eligible because of the age limit. Under the draft Constitution, there is no such limit.

Crucially, under the current Constitution, any amendment of the fundamental law relating to the presidency must be submitted to popular referendum. The new Constitution deletes this obligation. The President may decide to submit proposals for amendment only to the Assembly and the Senate. Accordingly, Ouattara would be free to initiate reforms to extend the length of the presidential term, if he so wishes. Considering the dominance of his party in the National Assembly, and his expected influence and involvement in the appointment of a significant portion of members of the Senate, there will be little formal procedural hurdles for such happenstances.

Despite the protests against the draft Constitution organized by some opposition parties on 20 October, the train of the constitutional reform process seems to be unstoppable. Religious groups and CSOs appear to be impartial and publicly invite every person to make her/his own choice. The last step will be the majority approval of the draft in a referendum, which will be held on 30 October 2016.  Considering the lack of strong political opposition, and the possible boycott of opposition voters, the draft is likely to be adopted.

Pierre Olivier LOBE is the Director of the Department of Strategic Analysis of the Institute (Think Tank) Association Internationale Afrique Survie (AIAS), and a PhD Candidate in Public Law at the University of Cocody (Cote d’Ivoire).

christopher muzungu 28 March 2018
<p>I loved this article so much. It provided me with a much deeper insight into the Ivorian case study as I was undertaking my research. Thank you</p>