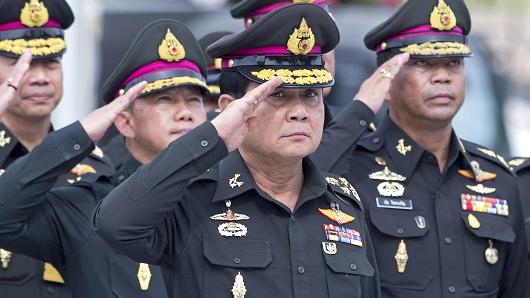 Thailand’s junta, the National Council of Order and Peace (NCPO), which took power in May, appointed a 200 member National Legislative Assembly (NLA) earlier this month. Beyond its primary goal of enacting laws, the NLA will supervise the cabinet and ensure the accountability of the government. It also chooses a Prime Minister whom it can only remove with the NCPO’s consent.  This development was to keep up with one of the junta’s promises to gradually return to democratic civilian rule. It comes on the heels of an Interim Charter enacted last month to serve as the country’s temporary fundamental law. The military’s takeover was welcomed by many Thais, out of frustration with recent chaotic civilian administrations. Looking at their modus operandi to date, however, one key question keen observers might be asking is whether this junta can be trusted.

The recently constituted NLA is meant to be a representative body for democratic deliberation but can it to perform the job? An answer might be found by examining the composition of the NLA and the method of selecting its members.

In the present Thai context, the junta’s preference for appointing rather than allowing the people to elect members of the NLA is understandable. Elections in Thailand have been characterized, arguably, by vote buying. Legislators are manipulated by leaders of political parties and those who financed them. As a result, they have become agents of particular private interests and public service delivery deteriorates.  Therefore, while elections remain the most uncontestable source of democratic legitimacy, they has also produced irresponsible, unaccountable and captured parliaments and governments. However, is single-handedly handpicking members of such an important institution a better alternative?

The Interim Constitution provides for diversity in the composition of the NLA. Ideally, this would representation from all the different sectors and classes of Thai society. The NCPO’s promise was that in line with the Interim Constitution, it would draw NLA members from six different sectors:  the public, private, civic, academic, and professional sector, and other sectors useful for the Assembly’s operation. This commitment was confirmed by its head of law and justice taskforce, General Paiboon Khumchaya, who stated that they would select people from all professions and from across the political spectrum. In order to depoliticize the body, any person who had been member of a political party during the three years prior to the appointment is ineligible.  But did the junta respect the constitutional requirement as promised? The evidence suggests the contrary.

The list of appointees draws only from three sources: bureaucrats, the military, and –despite the constitutional prohibition against individuals with membership in political parties— members and supporters of the political pressure group, Thailand People’s Democratic Reform Committee (PDRC).  Out of 200 members, 105 are from the Army, Navy, Air Force, and the Ministry of Defense. General Preecha Chan-Ocha, who is a younger sibling of Junta head Prayuth, was appointed, as were his friends from the military academy. A close aide of Prem Tinnasulanont, the Chairman of the Privy Council, is also a member. Positions were given to the PDRC supporters who had joined in toppling Yingluck and in inviting the coup: former senators, presidents of public universities, as well as regular speakers at PDRC protests. The daughter of Field Marshall Thanom Kittikajorn, the dictator responsible for the massacre of university students in 1973, was also chosen. She is infamous for rigorously defending military intervention.

With such obvious cronyism and nepotism, what exactly is the change that the military is supposed to be bringing?  Where is the Junta’s respect even for its own new constitutional order?

General Prayuth’s recent appointment by the NLA as Thai’s new Premier fuels fears that the Interim Charter and the junta’s roadmap, including the way the NLA was set up and composed, are all part of a strategic plan to ultimately entrench the military’s grip on Thai politics. As mentioned earlier, the NLA, as per the Charter, can only remove the Premier with the NCPO’s consent. The chances of this happening are nil, seeing that the NCPO is merely the institutional arm of –or better still a code name for the—junta over which the Prayuth, as Premier, now presides

Further, as an institution not only of law making but also of accountability, the Charter only gives the NLA limited supervisory responsibility over the Cabinet. A minister may, under the Charter, reserve their right to testify before the Assembly under the claim of national security and the Assembly cannot cast a vote of no confidence against a member of the cabinet. The NLA is therefore far from being the body to perform the deliberative, representation, law making and accountability functions that a proper legislature would do. It has merely been established to rubber stamp laws and directives from the NCPO or its administrative agencies.

This reality poses a number of important challenges and problems. The disproportionate number of military personnel appointed and the obvious biases in the process, such as the exclusion of anti-Sinawatra groups in favor of the pro-military elite establishment, are likely to obstruct efforts at national reconciliation. The NLA is already highly resented,  and not perceived as  democratic, legitimate, nor representative of Thais. This makes it unlikely that decisions on  key issues  which it will be addressing in the next legislative year, such as taxation, healthcare, land, education, election, or even lese majeste— all of which are subjects of great controversy—will gain traction across the board. The divisions in Thailand are deep, and ignoring different voices in the society only exacerbates the rift.

The discussion amongst some NLA members to impeach former PM Yingluck and members of her party is also seen as victor’s justice that will intensify the divisions and block any opportunities for healing and reconciliation.

Finally, General Prayuth’s initial interest and recent appointment to the Premiership only leaves more disturbing questions and reinforces doubt about the junta’s promises that they are only here to ‘clean and leave’. Similar promises have been heard in other contexts in the region, such as Fiji, where former strongman and interim PM Frank Bainamara has recast himself as a civilian and looks set to become President following general elections planned for September. Could Prayuth be taking a page out of Bainamara’s playbook? While it is hard to give a clear cut answer to this question at this stage, his tactics and moves so far certainly suggest that nothing can be ruled out.