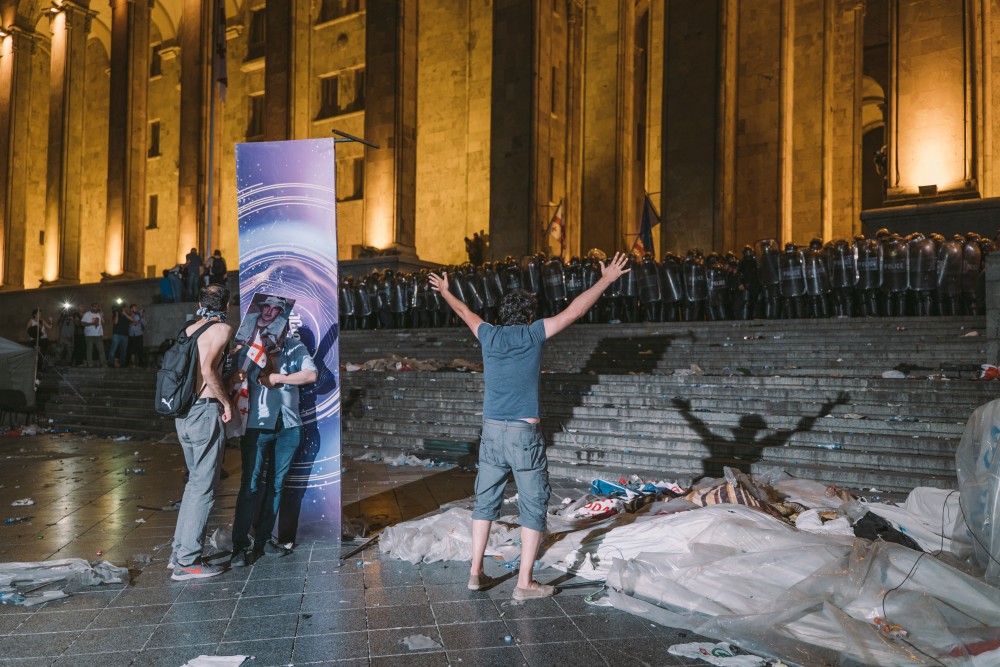 Georgia has reformed its electoral laws for the third time in as many years. Unexpected opposition political momentum and international support have accelerated the change towards a proportional system likely to weaken the attempt of the ruling Georgian Dream party to establish a hegemonic illiberal democracy. Nevertheless, the road to a genuinely competitive multi-party politics requires much more than electoral rules – writes Professor Davit Zedelashvili.

On 29 June 2020, the Georgian Parliament passed constitutional amendments modifying the electoral system for the October 2020 parliamentary elections. The modifications introduce elements of a mixed-member proportional system that ameliorates the excessive majoritarian effects of the parallel voting system. But the changes are a transitional measure and fall short of ensuring a fully proportional system, which will only be implemented from 2024. The changes reduce the threshold for winning seats in the proportional elections and, by reducing the number of single-member districts, diminish the advantage of additional or ‘bonus’ seats allocated principally to the biggest party. Bonus seats, which turned Georgian societal opinion overwhelmingly in favour of proportional representation, are granted to the biggest party ostensibly to enable a functioning governing majority.

The ‘almost proportional’ electoral system and its antecedence

The amendments implement four principal changes. First, the number of single-member districts were cut from 73 to 30, increasing proportional seats to 120, from a total of 150 seats. Secondly,  the threshold for winning seats in the proportional elections is significantly lowered, from 3% to 1% for political parties, and for  party blocs, the percentage equals to the natural number of parties within the bloc - for two-member bloc the threshold is 2%. Thirdly, the share of unallocated seats subject to bonus distribution is reduced. Fourthly, unallocated proportional seats are awarded according to the largest remainder rule, benefiting smaller parties.

Furthermore, bonus seats are capped such that a party may only receive additional seats up to one-fourth of the share of its votes. In practical terms, if a party gets 40% of the proportional vote, it is only entitled to 50% of all 150 seats. The formula emerged due to opposition demand that any political party commanding less than 40% of the proportional vote should not attain a parliamentary majority simply due to its ‘bonus’ seats. All extra seats are awarded to parties/blocs that pass the electoral threshold in order of their vote share, from largest to lowest.

Georgian Dream has presented the amendment as fulfilling its promise of establishing a proportional system, initially planned to take effect from the 2024 elections. Georgia’s otherwise fractured opposition, which discovered coordinating force in the demand for immediate implementation of proportional representation, claim victory for securing the ‘almost proportional’ system despite resistance from Georgian Dream, which was facing mounting internal and international pressure.

Georgian Dream used its dominance to push through unilateral constitutional reforms in October 2017. Changes to the electoral system were central to the consolidation of an illiberal constitutional regime run by the party’s founder and chairman, billionaire tycoon Bidzina Ivanishvili.

Following domestic opposition and scathing criticism of the Venice Commission, the ruling party in March 2018 agreed to revise the electoral system entrenched in the revised constitution, almost immediately after its passage, introducing proportional system for parliamentary elections with a 5% electoral threshold.

The ruling party argued against the immediate implementation of proportional representation ostensibly due to the absence of a robust party system.

However, under transitional provisions, the change would take effect only from 2024, effectively preserving the parallel electoral system for the 2020 elections, with 73 single-member majoritarian and 77 proportional seats, with a lower electoral threshold of 3%. The changes also included a one-time exception to the prohibition against forming electoral blocs.

Georgian Dream insisted that elections under proportional representation need robust party systems and the transition to a multi-party regime should be gradual to allow the development of strong parties. While defensible in principle, and could not be dismissed as wholly illegitimate, in the Georgian context, the argument was self-serving.

The art of abusive constitutionalism lies in making constitutional imperfections that are tolerable elsewhere appear similarly tolerable in local constitutional contexts, where in fact, they effectively serve illiberal ends. However, normative constitutional requirements are aspirational and wide latitude is allowed in their compliance, which at times opens possibilities for abuse in practice.

The delay in the implementation of the proportional system is intended to weaken a prominent opposition party.

Georgian Dream’s ostensibly principled rationale for delaying the implementation of the proportional system lied elsewhere. Ivanishvili and other party leaders calculated that the main opposition, UNM, would perish by 2024, thereby securing their hegemony.

Since 2012, Ivanishvili pursued a distinctively populist political imagination, mobilising the ‘pure people’ against forces of evil, which he associated with the UNM and former president Saakashvili, whose return to power should be prevented at all costs. And only Ivanishvili could achieve this herculean task.

Despite increasing marginalization, UNM has kept its loyal base of around 20% of the electorate. This explains Ivanishvili’s predicament. He needs UNM to sustain his moralistic antagonism that is vital for his electoral success. At the same time, under the proportional system, UNM’s support could undermine his grip on power. The delay in the implementation of the proportional system is therefore designed to marginalise UNM to the point of political irrelevance. This postponement is so crucial for Georgian Dream that, under the 2020 amendments, any snap elections before 2024 will be held based on the 2020 electoral system.

A fateful night on 20 June 2019 unraveled the ruling party’s plans. At midnight, special forces violently dispersed a spontaneous rally in front of the parliament building, protesting continued Russian occupation of Georgian territory and government policy towards Russia. Ivanishvili’s carefully nurtured narrative that his regime stood in contrast to UNM’s heavy handedness as its more ‘humane’ alternative was shattered. Furthermore, the party’s trademark Russia policy, presented as a ‘pragmatic’ road to peace, was challenged as a policy of appeasement of the occupying power.

The crackdown triggered more protests and at the rallies, civic activists outnumbered opposition leaders as lead speakers, including a demand for a fully proportional electoral system. Weighing the urgency of the risks to his regime, Ivanishvili announced that Georgian Dream would introduce proportional system for 2020 elections with no electoral threshold, and constitutional amendments were initiated during the summer 2019.

In November 2019, several Georgian Dream majoritarian parliamentarians protested against a proportional system and an amendment bill was voted down at its first reading. Ivanishvili pinned the defeat on internal party disagreement. However, the fable of the ‘revolt of majoritarian MP’s’ was unpersuasive and may have been orchestrated, notably as the same members had earlier supported proportional elections.

The promise of a fully proportional system was part of the gamble from the outset. Once the vigor of protests waned, Ivanishvili felt confident to overturn the playing table. He would concede only as much as internal and external pressure would force him to, and that he wouldn’t let himself fall back into the vulnerability of the immediate aftermath of the June crackdown.

Initially, the opposition proposed a ‘modified German model’, a mixed-member proportional system where the outcomes of the proportional vote would determine the overall number of seats to each party,  through amendments to electoral code, bypassing the constitutional amendment procedure. The ruling party declined the call to involve the Venice Commission. Instead, the Public Defender submitted the opposition bill to OSCE/ODHIR, which concluded that, while the conformity of the bill to Georgian constitution was beyond its competence to evaluate, the proposed system would be a reasonable legislative choice. However, the ruling party rejected the proposal as unconstitutional.

To break the deadlock, the opposition forwarded fresh proposals where the number of majoritarian seats should be significantly reduced, and no party/bloc should attain majority if it received below 40% of the proportional vote. On 8 March 2020, the ruling party and opposition groups reached a deal based on these principles.

Accordingly, despite some disruption due to the COVID-19 pandemic, Georgian Dream initiated constitutional amendments that were eventually adopted in June. Major parliamentary opposition groups, ‘European Georgia’ and UNM, boycotted the parliamentary process due to the disputed issue of political prisoners.

Following the June crackdown, the government intensified the weaponization of the criminal justice system against political opponents, including the detention of at least three opposition figures. The 8 March deal, according to facilitators’ statements, included ‘measures to overcome the appearance of politicization of the justice system’. The opposition insisted that these measures included the release of the three opposition figures, which the ruling party denied. By June, the President pardoned two of the leaders, while the third was sentenced to four years in prison and the President publicly declined to pardon him.

Breaking the logic of asymmetric games

Elections in illiberal regimes are built on a peculiar paradox. They provide a curious case of asymmetric games, where regime forces secure an advantage over opposition forces through systematically favourable rules of the game. For the opposition, elections in illiberal regimes mean a struggle on two levels: they play under unjust electoral rules not only to win elections, but also, more importantly, to change the unjust electoral framework.

As a result of the fundamental asymmetry, the outcome of the struggle on both levels remain uncertain, although regime forces are generally more likely to win elections. Changes at the fundamental level of the rules of the game directly affect the calculus of uncertainty. Accordingly, a regime determined to survive would not concede improvements to the rules that reduce its chances of eventual success.

This explains much of Ivanishvili’s behavior post the June 20 crackdown. Considering its waning popular support, the initial promise of a proportional system with no threshold made victory highly uncertain. By enhancing the position of smaller parties, the system increases their bargaining power that would make it extremely costly for Ivanishvili to integrate, should the needs of coalition formation so require.

Therefore, Ivanishvili gambled and achieved the electoral system, where he retains realistic chances of forming a governing coalition with his satellite parties. For the Georgian opposition, while the ‘almost proportional system’ is not their best choice, they have enhanced their chances of forming a coalition government.

The pivot towards proportional representation could provide smaller opposition parties, which do not intend to become part of either the Georgian Dream or UNM dominated power pyramid, an opportunity to push for the consolidation of multi-party rule. However, whether such window opens, and its prospects are realized, only marginally depends on the electoral system.

Davit Zedelashvili is professor of law at the University of Georgia, Tbilisi, Georgia.