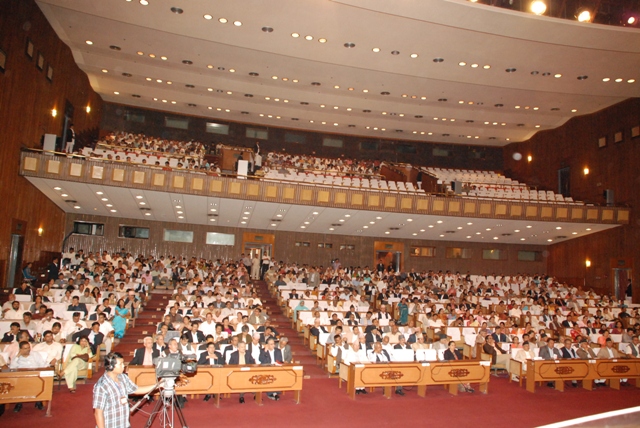 Far from moving closer to a deal on Nepal’s long-awaited Constitution, it appears key players are only moving farther away from that possibility. As I have argued previously, this has made any hopes of birthing a new Constitution by the January 22 deadline illusory.

Despite several extensions to its term, the Constitutional Political Dialogue and Consensus Committee (CPDCC) has failed to reach consensus on the key contentious issues  of federal design, form of government, electoral system and judicial system design.  After earlier refusals— arguably because it knows it lacks the numbers if the issues were put to vote—the opposition-chaired CPDCC has finally presented the report on the contentious issues to the Constituent Assembly CA for debate this week.  Parties have also intensified last ditch efforts at different levels to find a solution ahead of the January 22 deadline.

Even then, political parties continue to trade accusations and play the blame game.

The opposition alliance of 22 parties led by the Unified Communist Party of Nepal, UCPN (Maoist), which insists that any new constitution must be based on consensus, has resorted to street protests in recent weeks across the country.

Other developments do not paint a promising picture for the process either. Hindu fundamentalist, for instance, are demanding the reinstatement of the Hindu state, while Janajatis (or indigenous groups) are mounting demands for greater political guarantees, preferential rights to natural resources, as well as the right to self-determination in provinces created within their homelands. The Madheshi, who occupy Nepal’s Terai plains, are also agitating.  Comparatively underrepresented in the current CA (as opposed to the old one), they remain deeply suspicious of the current CA and do not trust that the UML-NC majority can cater for their interests. Already, they resent the UML-NC solution to the federal design question. This solution, they argue, will carve out and integrate six out of 20 Madheshi districts into provinces created for hill-based people. Most Nepali are settled in the Terai plains (predominantly Madheshi) and the hilly areas. They also disagree with the coalition parties on the electoral system, preferring the proportional representation (PR) system, with some flexibility to compromise for a mixed system.

Under these conditions, the prospects of reaching consensus on the contentious issues and ultimately a shared constitution look increasingly impossible.

Beyond what looks like a mere disagreement amongst politicians on the procedural question of whether to resolve the contentious issues by vote or consensus lay deep historical and ideological differences between the parties which — as in 2012 — might ensure that  consensus is never reached.

The popular uprising of April 2006 which led to the abolishment of the monarchy and the establishment of a republican Nepal on the principles of secularism, federalism, participation, representation and inclusion, as well as other political developments since then, also introduced new political forces — who promoted such principles — into mainstream politics. In particular, the Maoist (drivers of the decade long insurgency from 1996-2006) and the Madheshi and Janajati (who brought the plight of marginalized groups and ethnic minorities to the agenda through uprisings between 2006 and 2012), established themselves as the legitimate political competitors of the traditional NC and UML.

As demands for the restructuring of the Nepali state based on democratic principles climaxed in the initial phase of the transition (2006-2012), the traditional parties, NC and UML in particular, submitted reluctantly to these pressures. Concurrently, they ensured that the demands which they considered radical never find their way into the new Nepali constitution — at least not exactly in the way the new political forces wanted it.

Federalism, in particular, is one reason why the first Constituent Assembly did not deliver a new Constitution. The NC and the UML resented the UCPN (Maoists)’s preference to factor in ethnicity in the demarcation of federal units and to accord special treatment to indigenous communities.

It is also important to note that the NC and UML were key players in the development of the 1990 constitution which, unlike the Interim Constitution and the principles it espouses, failed to accommodate the diverse character of Nepali society. In fact, both parties are generally seen as hostile to principles of identity-based federalism, inclusive elections, ethnic based proportional representation system and collective rights of minority groups. Viewed thus, one may conceive the polarization in the constitution making process as driven by the UML and NC faction’s unwillingness to truly embrace the changes ushered in by the 2006 revolution and enshrined in the Interim Constitution, and the other faction’s determination to move beyond the 1990 Constitution. The positions taken on the key contentious issues illustrate this further.

The UCPN (Maoist), recognizing its numerical inferiority in the new CA, has shifted its positions on these issues significantly. On the federal question for instance, it has watered down its initial demands for an ethnicity-based federal system that guarantees prior rights on natural resources for indigenous people as well as their right to self-determination. On form of government, it now wants a mixed system where the Prime Minister is directly elected and the President indirectly elected. This differs from the presidential system with a directly elected president it advocated for in 2012. The UCPN (Maoist) has also dropped its demand for an ‘ethnic-based multi-member direct election system’ for the Lower House of parliament, in favor of a mixed system that combines both first past the post (FPTP) and PR.

However the coalition parties’ positions on these issues have hardly changed. The NC, for instance, remains resolute in their preference for a parliamentary system of government despite compromising on a mixed system in 2012. On federalism, the coalition has retained its proposal for territorial or administrative federalism with seven provinces. Promises to factor in ethnicity in the demarcation of provinces have been unreliable. The NC has also backtracked from an earlier commitment to a mixed system for the Lower House of Parliament in favour of the first past the post (FPTP), system.

History and ideology aside, time is also a factor.

‘There will be unexpected consensus at the eleventh hour on the disputed issues of the new constitution,’ said a confident Prime Minister Sushil Koirala (of the NC) recently. But when does that eleventh hour come?

The deadline for finalizing this process is January 22 but after UCPN (Maoist) leader Baburam Bhattrai’s pronouncement in October that ‘promulgation of new constitution on 22 January is merely a moral deadline’, it becomes apparent that none of the parties — at least not the NC or the UCPN (Maoist) —  are in a hurry to conclude the process. And there may be a political agenda to this as well.  A meeting held in October amongst the party leaders – the NC, UML and UCPN (Maoist) — reportedly focused more on the question of power sharing after January 2015 than on the contentious issues of the constitution, especially after PM Koroila also indicated that he will not resign as PM if the CA does not adopt a constitution by January 22. This is contrary to a prior agreement between the coalition parties, which provided for the handing over of leadership to the UML.

With a fragmented civil society and no credible force to bring pressure to bear on the political class, Nepal’s politicians have mostly been left to their own devices. With no real motivation on either side to reach consensus, and with it a new Constitution by January 22, is clearly becoming an illusion despite all the rhetoric.