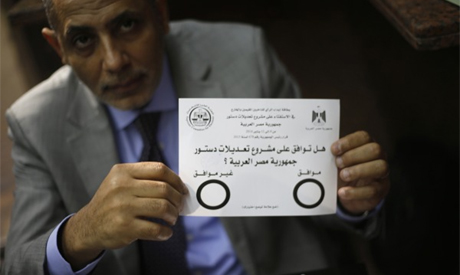 An Egyptian man displays the voting paper of a referendum on the new constitution at the Egypt Consulate in Dubai (Photo: Reuters)
<p><span>This week's referendum on a new draft constitution marks the first time Egyptians have gone to polls since the ouster of Islamist president Mohamed Morsi on 3 July 2013. It also marks the sixth time Egyptians have gone to polls since they rose up against the autocratic regime of former president Hosni Mubarak on 25 January 2011, and forced him out of office on 11 February 2011.</span></p>
Read the full article here: Ahram online