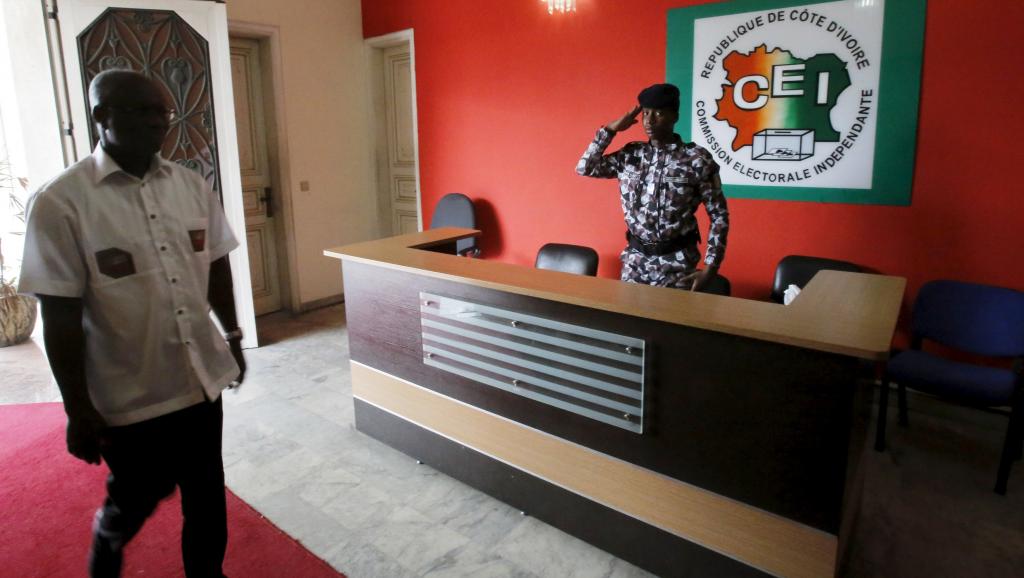 A soldier at the Ivorian Electoral Commission salutes a visitor (photo credit: RFI)

Efforts to enhance the legitimacy of the Ivorian Electoral Commission and comply with decisions of the African Court have informed reforms to its composition. Nevertheless, the reforms may not have effectively addressed concerns over independence and impartiality. In combination with controversy over Ouattara’s plans for a third presidential term, the contest over the Commission could precipitate a prolonged political and even security crisis – writes Pierre Olivier Lobe.

On 30 September 2019, the Independent Electoral Commission elected its president among the fifteen newly appointed commissioners. The appointments were made in accordance with the revised law related to the composition of the Commission signed into law by President Alassane Ouattara on 5 August 2019.

The setting up of the Commission is an important step in the lead up to general elections, including presidential elections, expected to be held in October 2020. As the 2016 Ivorian Constitution leaves the issue of composition of the Electoral Commission to organic laws, the revisions were undertaken through the ordinary legislative process. Nevertheless, the changes have significant constitutional and electoral consequences.

Notably, the revisions were undertaken to give effect to the 2016 decision of the African Court on Human and Peoples’ Rights which found that the composition of the then Electoral Commission unduly favoured the ruling party and incumbent president, and that the manner of appointment was incompatible with requirements of impartiality, as the members seat as representatives of the appointing offices. The Court found these incompatible with relevant provisions of the African Charter on Human and Peoples’ Rights and the African Charter on Democracy, Elections and Governance. It therefore ordered Cote d’Ivoire to amend the relevant provisions of the law regulating the Electoral Commission. Nevertheless, despite a request from Cote d’Ivoire, the Court did not provide specific guidelines on how the Commission should be reconstituted.

The controversy over the composition of the Commission has come at a time when incumbent President Ouattara has not ruled out the possibility of running for a third term.

While the government indicated that the revised composition of the Commission is compatible with the decision and reasoning of the African Court, the main opposition parties and civil society groups continue to oppose the composition of the Commission. The issue is therefore very controversial, potentially undermining the acceptability of the planned October 2020 elections.

The controversy over the composition of the Commission has come at a time when incumbent President Ouattara has not ruled out the possibility of running for a third term, at the end of his current second term. Although the 2016 Constitution imposes two term limits, Ouattara has indicated that his first two terms do not count as he was elected under the previous constitution. In combination with the contention over the Electoral Commission, the issue of a third term is likely to increase political tension.

Reconstituting the Electoral Commission: More of the same?

In November 2016, in a petition submitted by an NGO, Action for the Promotion of Humans Right (APDH), the African Court ruled that Cote d’Ivoire violated the right to equality of all before the law and the right to have an independent and impartial national electoral body, responsible for the management of elections guaranteed in African and sub-regional (ECOWAS) human rights and democracy frameworks.

Initially resistant to any change to the Electoral Commission, the Government of Cote d’Ivoire resolved to open talks with the opposition in January 2019. However, these talks triggered, from the beginning, contestations from some opposition parties.

The composition of the Electoral Commission initially proposed by the Government retained the imbalance in favour of the presidential group, particularly as the president, the Speaker of the National Assembly and two cabinet ministers (for finance and territorial administration) would have each appointed one member, on top of the equal seats granted to the ruling and opposition parties. Other parties, such as Lider, the party of Mamadou Koulibaly, former Speaker of the National Assembly and associate of former President Laurent Gbagbo, boycotted the reform process. Civil society organisations also opposed the composition of the Commission for failing to address the issues raised by the African Court judgment.

The observations of the African Court that the representative system may undermine requirements of impartiality of election management bodies were largely left unaddressed.

Despite the opposition and boycott, the draft law reconstituting the Independent Electoral Commission was adopted by the National Assembly on 30 July and three days later by the Senate on 2 August. President Ouattara recognised the opposition dissatisfaction but indicated that there was need for an end to the process.

Some parliamentarians challenged the constitutionality of the law before the Constitutional Council, which rejected the petition.   The law was promulgated by the President of the Republic on 5 August 2019 - Law n°2019-708 of 5 August 2019.

New members of the Commission

The 15 members of the new Commission were appointed during the Council of Ministers meeting on 25 September. The nomination and appointment of the representatives of opposition political parties, including those associated with the Ivorian Popular Front, the party of former President Laurent Gbagbo, has provided a semblance of legitimacy to the Electoral Commission. Nevertheless, many opposition groups and CSOs continue to protest against the new Commission.

Coulibaly Kuibiert Ibrahime, a Magistrate selected by the Superior Council of the Judiciary, and a former Secretary General of the Constitutional Council, was elected by his peers as President of the Independent Electoral Commission, replacing Youssouf Bakayoko who occupied this function since 2010. With this appointment, the Independent Electoral Commission is now up and running, despite the opposition.

Considering the relative dominance of representatives of the president, cabinet and the ruling party, there is concern that the Commission may favour the government, particularly if Ouattara chooses to run for a third term.

Ouattara was first elected President of Cote d’Ivoire in 2010, following controversial elections, which led to a political and security crisis and a brief civil war. He was then re-elected in 2015 with a landslide. As part of his campaign, he promised to lead a constitutional revision process. A new constitution establishing two presidential term limits was adopted in a referendum in October 2016. Nevertheless, there is no transitional provision specifically counting served terms for this purpose. In fact, the upper age limit on presidential candidates in the former constitution was abolished, at hindsight to clear any potential blockades in case Ouattara chose to run again.

Accordingly, the 78 year old Ouattara indicated that he is entitled to two new terms under the current constitution, although he has equivocally hinted at transferring the mantle in 2020. While he is yet to formally confirm his candidacy in the next elections, there are signs that this is a possibility. The most evident development is the transformation of the former ruling coalition, the Rassemblement des Houphouëtistes pour la Démocratie et la Paix (RHDP), into a formal party, with Ouattara as its president. Unlike the 2000 constitution, the 2016 Constitution allows individuals to be at the same time President of the Republic and head of a political party. This manoeuvre has led to the rupture of the alliance between Ouattara and Soro Guillaume, former prime minister and president of the National Assembly, on the one hand, and between Ouattara and Henri Konan Bédié, former president of the National Assembly, on the other.

The independence of the Commission would be critical in determining the eligibility of Ouattara for a third term.

Both Guillaume and Bédié, who are expected to run in the next elections, consider Ouattara’s plans as breaking promises to leave power. They also oppose the constitutional interpretation that would allow Ouattara to run again. The general understanding at the writing of the 2016 Constitution was that Ouattara would not be eligible for a third term. If Ouattara indeed confirms his participation in the October 2020 presidential elections, the Electoral Commission would have to first determine whether to include him in the provisional list of candidates. The ultimate determination of his candidacy would have to be made by the Constitutional Council, the organ in charge of drawing up and publishing the final list of candidates in presidential elections.

In such a scenario, the independence of the Commission as well as the Council would be critical. As noted earlier, the former General Secretary is the new President of the Independent Electoral Commission. This may be a troubling coincidence.

In a similar circumstance, in January 2012, the Constitutional Council of Senegal ruled that then incumbent President Abdoulaye Wade was allowed to run again, as the term he was serving when constitutional changes introducing term limits were adopted did not count. The decision sparked popular protests and crucially a strong opposition coalition around President Macky Sall, who defeated Wade in the elections.

As the critical entity in charge of running elections, independence and impartiality are crucial for the legitimacy of the Electoral Commission. While the number of representatives of the government and ruling party in the Commission has relatively decreased, they are still overrepresented. Moreover, the observations of the African Court that the representative system may undermine requirements of impartiality of election management bodies, which appears to prefer commissions with expert rather than representative members, were largely left unaddressed. Nevertheless, it is not clear if any individual or groups would submit a follow up case to the African Court.

Considering the high stakes, particularly involving issues related to the potential candidacy of Ouattara, the legitimacy of the Commission, and the Constitutional Council, are critical. Without such legitimacy, their decisions will be contested and could potentially lead to a prolonged political and even security crisis. The relevant stakeholders should therefore work together to ensure an acceptable and level electoral playing field.

Pierre Olivier LOBE is Director of Strategic Analysis at Association Internationale Afrique Survie (Institute AIAS). He is also a legal consultant and lecturer of public law at the Facultés Universitaires Privées d’Abidjan (FUPA).