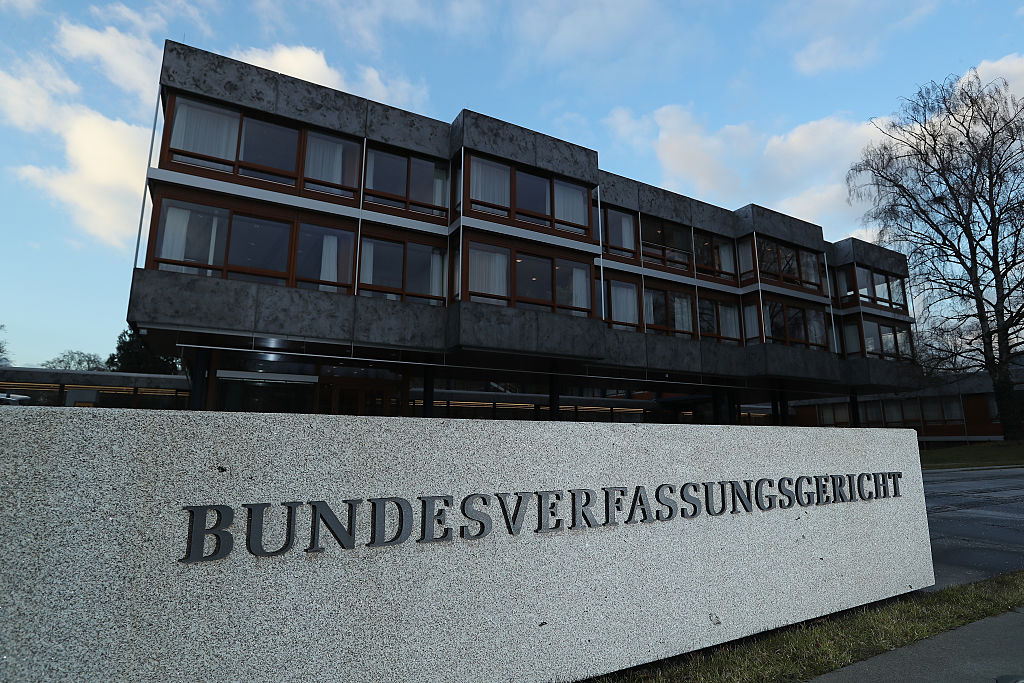 The strict responses to the Covid-19 pandemic in Germany have triggered a slew of judicial challenges, including before the Constitutional Court. While the Court’s’ decisions have respected the demands of a decisive pandemic response, they have also ensured that fundamental rights are not swept aside and that authorities continue to bear in mind fundamental rights obligations when applying the relevant measures. In the process, the Court has complemented the localised but coordinated decision making framework that German federalism engenders – writes Dr Holger Hestermeyer.

The first coronavirus infection in Germany was diagnosed on 27 January 2020. While that outbreak would be contained by the end of February, the pandemic had nevertheless taken a hold in Germany. The German state machinery reacted with a number of measures at all levels ranging from amendment of certain technical rules at the end of January to passing lockdown measures of a breadth and severity without precedent in the history of the Federal Republic of Germany in the second half of March. While the first lockdown measures were passed at the municipal level, most of the measures currently in force have been promulgated in statutory instruments by the executives of the German Länder (states). The federal and Länder governments also agreed on non-binding guidelines to coordinate responses.

A system that prides itself on protecting the rule of law must provide avenues for effective judicial review of these unprecedented restrictions.

The large number of cases filed against the measures should not surprise anyone. While strict measures to contain the pandemic and protect health systems were necessary, the effects of the measures – even if strictly time-limited – are severe and range from threatening livelihoods to risking the isolation of the elderly. Issued by executives at breakneck speed, the measures throw into turmoil a complex legal order with detailed rules painstakingly conceived over decades of democratic governance. A system that prides itself on protecting the rule of law must provide avenues for effective judicial review of these unprecedented restrictions.

This piece tackles the topic in three steps: First, I will give an overview over the statutory instruments of the German Länder that contain the relevant lockdown measures. Secondly, I will set out some of the main constitutional issues they raise. Thirdly, I will turn to the case law.

Germany is a federal republic. The lockdown measures that are the subject of this piece have been promulgated as statutory instruments by the governments of the German Länder. All 16 German Länder have passed and repeatedly amended such instruments: Baden-Württemberg, Bavaria, Berlin, Brandenburg, Bremen, Hamburg, Hesse, Lower Saxony, Mecklenburg-Vorpommern, North Rhine-Westphalia, Rhineland-Palatinate, Saarland, Saxony, Saxony-Anhalt, Schleswig-Holstein, Thuringia.

The states base their statutory instruments on section 32 of the Federal Act to Prevent and Fight Human Infectious Diseases (Infektionsschutzgesetz). The provision empowers Länder governments to promulgate statutory instruments authorising measures including, under certain conditions, in particular obliging ‘people to remain where they are or only leave under certain conditions or to not enter places it determines or public places or only enter under certain conditions’, or ‘limit or ban events or other assemblies of persons’ and limit ‘fundamental rights of personal freedom … freedom of assembly … freedom of movement … and inviolability of the home …’. The wording of the provision was changed on 27 March 2020 by the much criticised federal Act to Protect the Population in Epidemics of National Reach that was passed at record speed to add a component of federal action to the Infektionsschutzgesetz, which, before, largely relied on action by the Länder.

While the Länder coronavirus statutory instruments differ, they also share common features, as the Länder acted in close coordination with each other and the federal government, repeatedly agreeing on guidelines, most prominently on 22 March 2020. Generally (and bearing in mind that the rules are and have been amended repeatedly), the Länder statutory instruments contain six core rules: (1) They list businesses and public institutions that have to close, as well as businesses exempt from closures; (2) They contain rules for contact limitation, providing e.g. that a person may in public only be accompanied by certain family members and persons belonging to their household or one other person and have to maintain a distance of 1.5 m from all other people. In varying formats, the statutory instruments also limit private gatherings. Some states (e.g. Bavaria) chose to implement a full lockdown, prohibiting leaving one’s home absent a good reason and listing permissible reasons; (3) Religious meetings are banned; (4) Special measures, such as limiting visiting rights in care homes, target particularly vulnerable people; (5) They contain an obligation to wear mouth-nose covering in public transport and shops. (6) All statutory instruments contain a sunset clause limiting their validity until a specified date (e.g. currently 15 June for Baden-Württemberg).

Numerous concerns have been raised concerning the constitutionality of the severe lockdown measures. The main concerns fall into three categories:

Firstly, there are doubts whether the relevant provisions of the Infektionsschutzsgesetz constitute a proper basis for the statutory instruments, including the compliance of the provisions with article 80 of the Grundgesetz (German Constitution), which imposes requirements on laws authorising the issuance of statutory instruments by the federal government, a federal minister, or Länder governments.

Thirdly, as exceptions multiply and restrictions are gradually lifted, the right to equal treatment will gain importance in any analysis.

As the lockdown statutory instruments have all been handed down relatively recently, the Court has so far only decided a number of petitions seeking interim measures. The Court can grant such measures where urgently required, for example, to prevent grave harm. As a rule, the Court will, in this stage of the proceedings, not analyse the arguments made for the violation of the constitution, but rather weigh the consequences of not granting interim relief in a case which later succeeds on the merits versus those of granting relief where the case later fails. The Court will, however, look at the chances of success on the merits of the case, where a constitutional complaint would be inadmissible or obviously without merit, and where delay would prevent the protection of fundamental rights in cases of discernible chances of success of a constitutional complaint.

In several cases the Court refused to grant interim measures for procedural reasons, e.g. for failure to exhaust legal remedies before administrative courts in cases challenging the prohibition of a protest, the Bavarian lockdown and rules on contact limitation; for failing to argue the case, or for failure to invoke basic rights in two cases attacking all Länder statutory instruments; and for confusing Frankfurt an der Oder with Frankfurt am Main in a case against the closure of a restaurant.

The Court’s assessments have sought to affirm the need to avoid the blanket suspension of fundamental rights.

In three cases, however, the Court granted interim measures. In the first of these, the city of Gießen had prohibited a protest despite proposals for detailed precautions on social distancing by the organisers, arguing that Hesse’s coronavirus statutory instrument did not allow assemblies because of its contact limitation rules. The petitioner’s attempt to obtain interim relief failed before the administrative court and on appeal. The Constitutional Court then held that the city’s measure violates the freedom of assembly. The Court ruled that Hesse’s statutory instrument does not generally prohibit assemblies in open air. As the city assumed such a general prohibition, it failed to recognise that it had discretion regarding its decision, including to ensure the freedom of assembly. The Court held that the city had to decide anew whether the protest could be held under certain conditions or whether it should be prohibited.

In the second case involving a coronavirus-related protest in Stuttgart, the city had simply told the organiser that it currently could not process requests to hold protests/mass gatherings as these are prohibited under Baden-Württemberg’s coronavirus statutory instrument. After exhausting remedies before administrative courts the petitioner turned to the Constitutional Court. The Court held that the action of the city violated the freedom of assembly. Baden-Württemberg’s statutory instrument contains a contact limitation rule, but gives the authorities the possibility to grant exceptions for important causes. As in the previous case, the authorities failed to recognise that they can exercise discretion and in that process have to take the freedom of assembly into account. Any argument in that regard has to relate to the specifics of the case at hand and the authorities have to consider – if possible together with the petitioners – what alternative measures are available to balance the freedom of assembly and the protection from infectious diseases.

The third case concerned a petition to hold Friday prayers at mosque during Ramadan despite Lower Saxony’s ban on religious gatherings in its statutory instruments. The petitioner offered to ensure a number of protective measures including limiting participants in a mosque that fits 300 worshippers to 24 and maintaining minimum distances of 1.5 m. He argued that he should be allowed to open the mosque under similar conditions as shops. The argument did not prevail before the Oberverwaltungsgericht (higher administrative court), even though the court recognised the severe limitation of the freedom of religion. The court argued that a religious service as a common action of some duration presents higher infection risks than shopping activities. Following the Oberverwaltungsgericht, the Constitutional Court refused to open all mosques during the relevant time period. However, the Court held that the infection risk depended on a number of details ranging from the way in which the service itself is held to the size and construction of the mosque. Given the severe limitation of the freedom of religion that limiting Friday services during Ramadan implies, the current threat level and the strategy to fight the pandemic does not justify a general ban without providing for the possibility of an exception considering all the circumstances of a case and the possibility of ensuring through stipulations that the risk of infection does not increase in a relevant manner.

In essence, the Court’s assessments have sought to affirm the need to avoid the blanket suspension of fundamental rights while granting a wide latitude to executive action to prevent the spread of the coronavirus. The decisions have forced local authorities to make contextualised assessments, and take responsibility for their decisions, ensuring a minimum level of protection of fundamental rights in areas that are particularly sensitive. While the Court is careful not to question the health-related necessities of the pandemic response, it ensures that rules and their application continues to respect considerations of fundamental rights.