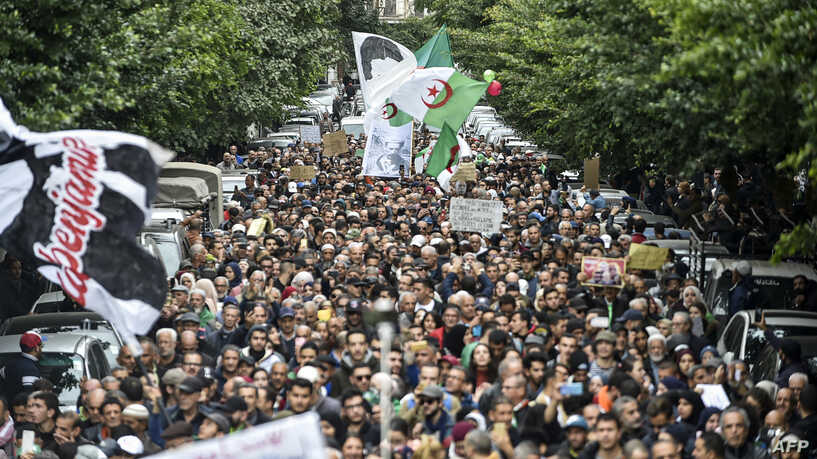 In response to a year of popular protest demanding change, Algeria’s new president launched a constitutional reform effort.  However, the draft that was published in May tweaks the existing constitution in ways that are unlikely to satisfy the demands for radical change. Nevertheless, despite public opposition, it is likely to be adopted in a referendum – writes Zaid Al-Ali

Algeria’s current constitution has been in force for decades.  It is a strong presidential system that has allowed for a few individuals to dominate state institutions.  Many Algerians have argued that the state is increasingly incapable of addressing a growing number of challenges.  In response to protests that started in 2011, former president Abdel Aziz Bouteflika amended the constitution in 2016, including by reintroducing term limits, but the public felt almost no change in the way that government functions.

Bouteflika himself remained in power for 20 years. The end of his rule was characterised by paralysis and decline, which inspired yet another popular uprising that started more than a year ago.  In response to the uprising, the army removed Bouteflika, and a new presidential election was organised.  The new president appointed a small committee of handpicked experts and requested of them that they produce a new draft constitution in just three months, which they did.  One of the members of the expert committee has since stated that the draft amendments are inadequate and has withdrawn from the committee.

The expert committee’s draft amendments were released at the end of last week and are being widely discussed at the moment. Supporters of the uprising reject the entire process because of the top down approach and the lack of popular input.  Others have offered substantive comments on specific provisions, focusing a small number of elements, including issues relating to identity.  Importantly, the draft consists of proposed amendments to the existing constitution. As a result, the draft is still very much anchored in the current constitution, and only proposes to build on what is already there.  This makes it much more difficult to make the type of radical change that ordinary Algerians are asking for, so it is not surprising that they are not satisfied.

Under the proposed changes, Islam remains the religion of state (Article 2). There is no mention of Sharia and there do not appear to be any changes that would increase the scope of religion in Algeria.  On the other hand, there has been significant controversy about issues relating to language and identity. Arabic and Amazight are both mentioned as "official languages" but Arabic remains the only "language of state" (Articles 3 and 4). Algerians from both sides of this issue are unhappy with this arrangement.

The draft amendments propose to keep in place most of the constitution's "general principles", which include the usual references to democracy, plurality, and social justice (Article 15). All of these are very common in comparative practice and very few really mean that much without specific mechanisms to bring them to life.

On basic rights, the draft constitution follows a by now very old and familiar technique. It lengthens the list of rights while at the same making sure that most of those rights are devoid of meaning.  For example, there is now a right to water (Article 64), but there is very little chance that this right will ever be enforced in a court, given that all social and economic rights in Algeria remain entirely aspirational. There is also very little improvement on civil and political rights.  The draft's wording on freedom of assembly is highly restrictive, providing that a law will determine how the right should be exercised without giving any indication how far the law can go in limiting the right.  Most importantly perhaps, the draft constitution has not incorporated a limitations clause (Tunisia's 2014 constitution has a robust limitations clause - see Article 49). That means that there is no guidance on how rights can be limited, which means that the state is very unlikely to change any of its practices in the short term.

The imperial president remains, with some tweaks

On the system of government, the draft constitution is still firmly presidential. The president still enjoys huge powers. The president has control over national defense, over government formation and appointments (Article 95).  The president appoints the prime minister "after consulting the parliamentary majority" (which means that the president can choose any candidate he wants) and can dismiss the PM at will (Article 95(7)).  By way of comparison, Morocco’s 2011 Constitution forces the King to appoint a PM who must be drawn from the largest parliamentary party.  The PM nominates ministers, while the president appoints them which clearly suggests that he can block the nomination of any specific minister (Article 102).  Parliament has close to no role in the process.  The president still has authority to appoint people on his own that he definitely should not be able to appoint, including the head of the supreme audit institution, the president of the high court, among others (article 96).  The president now has the power to appoint and to delegate powers to a Vice President (Article 95). This has gathered a lot of attention in the public debate, although it is not clear whether this will make any practical difference.   On states of emergency, the president can still declare a state of emergency virtually at will, but can only do so for 30 days. The period can only be renewed by a joint session of parliament (article 112). This is a clear improvement to the previous system, which allowed for limitless states of emergency.

The draft also proposes to give the parliamentary opposition the right to head parliamentary committees, but does not say which ones (Article 121). Tunisia's constitution specifically provides the opposition the right to head the finance committee.  The draft also proposes to impose a two term limit on members of parliament (Article 127).  Parliamentary term limits are comparatively rare, but the experience that does exist suggests that have very little positive impact, and just move opportunities for corruption elsewhere.  The parliament can withdraw confidence from the government but must meet a very high threshold (two thirds of members), which will be close to impossible to meet in most circumstances (Article 167).  In any event, the president maintains the absolute right to dissolve parliament, for whatever reason (Article 156), which will significantly curb the parliament’s enthusiasm to exercise oversight over the executive.

There are some important changes in the judiciary, but much remains the same, including that the president retains very significant influence on the courts through appointments and through control over specific institutions.  For example, the president is the head of the high judicial council and also appoints some of its members (Article 187) which is a clear violation of the separation of powers.  Meanwhile, almost all of the judicial council's internal rules and powers are left to be defined by subsequent legislation, which means that it will be at the mercy of the executive and of the legislature (article 190).  On the constitutional court, the draft abandons the old constitutional council and replaces it with a court.

Most of the substantive changes had already been entered into before and mirror the reforms that were carried out in France in 2008 and that have since been adopted in Morocco and Tunisia as well.  The president appoints four members of the constitutional court, the courts four, and the parliament four (Article 194), which is almost exactly the Tunisian model.  The court's mandate includes reviewing constitutionality of laws, etc. Constitutional review can be triggered either 30 days after a law is adopted, or by referral from a lower court (article 202). This is very much in line with regional and international trends.

The draft proposes to make a small change to the system on decentralization.  Decentralisation in Algeria is mainly administrative.  The central state maintains a very significant amount of control over decentralized institutions.  The proposed changes state that specific municipalities can have their own "special system" (Article 16). It's not clear exactly what that means but at the very least it appears to open the door to asymmetry.  Some commentators have expressed concern about this possibility, on the basis that it could further weaken national unity.  On its own, this does not appear to be a major area of concern.

There is significant controversy about the role of the army. Article 29 provides that the army can be deployed outside of the national territory to support international peace keeping missions, something that had never been the case (Article 31).  Some commentators have argued that this change could change the army's place in state and society and are concerned by the implications.  Others have suggested that this may mean that Algeria is preparing to involve itself in neighboring Libya.  It’s not yet clear whether this change will have any meaningful impact in practice but some commentators in Morocco have already voiced concern that the intention may be to deploy Algerian troops to the Western Sahara.

More of the same

Overall, the draft constitution represents more a continuity of the historical Algerian framework structured around a powerful president. Despite some of the institutional innovations, notably with an independent election management body, the lack of constitutional detail means that the dominant political forces will likely continue to control the state’s functioning without any meaningful oversight.

Once reported public consultation over the draft ends, the draft constitution will be passed on to parliament, where the ruling party has the numbers, and subsequently to a referendum. Many ordinary Algerians have expressed significant dissatisfaction at the proposed changes. Nevertheless, if past experience is anything to go by, the changes are likely to be adopted in a referendum later on this year by a wide margin.

Zaid Al-Ali is a Senior Programme Officer in Constitution-Building in the Africa and West Asia Regional Office of International IDEA.

This piece was originally posted on the IACL-Blog. It has been modified and updated to meet ConstitutionNet's requirements.