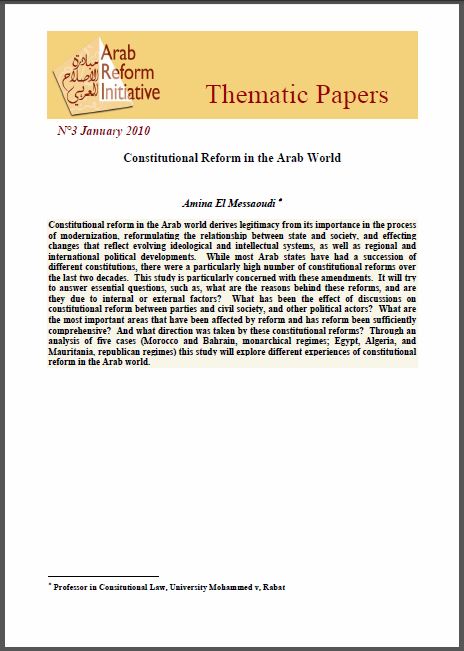 This thematic paper, also avaiable in Arabic, is published by the "Arab Reform Initiative" a network of sixteen think tanks and research institutes from the Arab world, Europe and the United States. It was authored by Amina El Messaoudi, Professor in Consitutional Law, University Mohammed v, Rabat, Morocco.

Constitutional reform in the Arab world derives legitimacy from its importance in the process of modernization, reformulating the relationship between state and society, and effecting changes that reflect evolving ideological and intellectual systems, as well as regional and international political developments. While most Arab states have had a succession of different constitutions, there were a particularly high number of constitutional reforms over the last two decades. This study is particularly concerned with these amendments.

The paper will try to answer essential questions, such as, what are the reasons behind these reforms, and are they due to internal or external factors? What has been the effect of discussions on constitutional reform between parties and civil society, and other political actors? What are the most important areas that have been affected by reform and has reform been sufficiently comprehensive? And what direction was taken by these constitutional reforms? Through an analysis of five cases (Morocco and Bahrain, monarchical regimes; Egypt, Algeria, and Mauritania, republican regimes) this study will explore different experiences of constitutional reform in the Arab world.