Algeria: A Constitutional versus a Political Solution 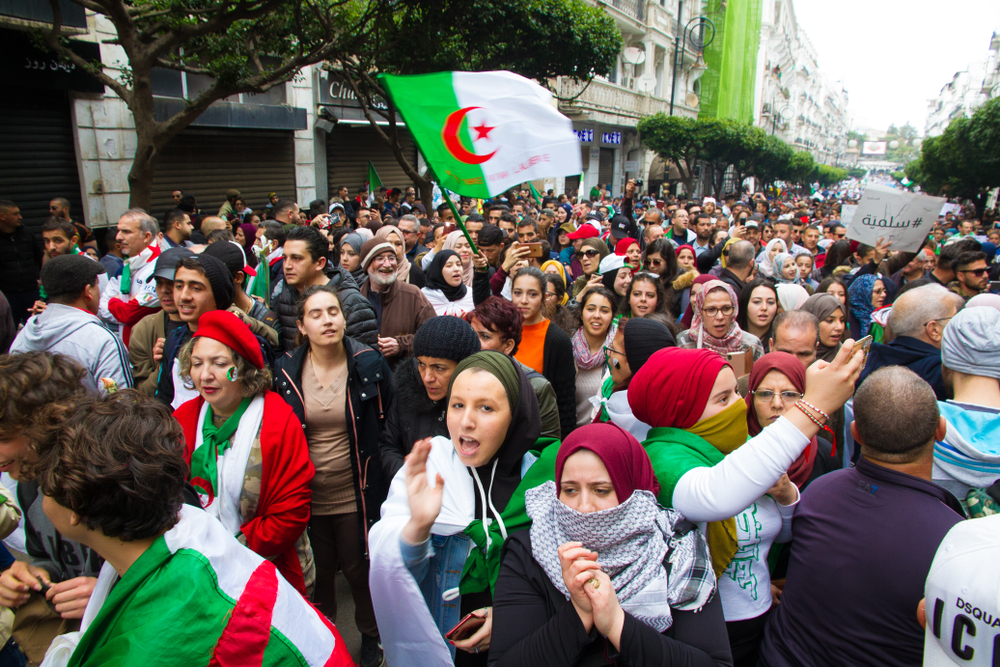 Weeks of mass demonstrations have ousted Algeria’s president, Abdelaziz Bouteflika, forcing him to step down and relinquish his bid for a fifth term in office. His resignation has opened up a new perspective for the country to either move forward towards a “genuinely democratic and political transition” as called for by protesters or to follow a constitutionally mandated process as put forward by the Army Chief of Staff. Political leaders hold diverging views on how to craft a credible and legitimate transition that would be accepted by all while demonstrators continue to stage huge protests in support of regime change and the advent of a new Constitution for a new Algeria.

When youths took to the streets of Algeria’s eastern town of Kherrata on 16th February 2019, they could not imagine that a week later, millions of Algerians would follow suit throughout the country to oust ailing President Abdelaziz Bouteflika. Every Friday ever since, millions of Algerians have been demonstrating in all parts of the country. Not only did the protesters reject Bouteflika’s desire to seek a fifth term in office but they also demanded a radical “change of system” which they labeled as corrupt and non-democratic.

They built up a “Hirak” (“movement” in Arabic) owing notably to social media and snatched a first victory as the President renounced a fifth term and was forced to resign, followed soon after by the Prime Minister and cabinet.

In the meantime, a new cabinet has been set up and the Army Chief of Staff reiterated the army’s abidance by the country’s Constitution and specifically Article 102.

In other words, any transition should be contemplated within the framework of Article 102 which stipulates that “… In case of resignation or death of the President of the Republic, the Constitutional Council shall meet de jure and declare the definitive vacancy of the Presidency of the Republic. It shall immediately communicate the act of declaration of definitive vacancy to Parliament, which shall meet de jure. The Speaker of the Council of the Nation shall assume the function of the Head of State for a maximum period of ninety (90) days, during which presidential election shall be organized.”

The Army Chief of Staff tends to cling to Article 102 which is considered an obstacle to the achievement of the people’s demands of regime change and democracy. A number of constitutional experts support the army’s view in saying that any violation of the Constitution may well weaken the country’s legal framework and lead to further breaches of the law.

Conversely, other experts say the Constitution is being used to obstruct change and progress towards a democratic Algeria and call for a political solution to be worked out outside the provisions of Article 102 meaning that the Speaker of the Senate and the new cabinet should be dismissed to pave the way for a “genuine transition” with a genuine transitional authority.

Meanwhile, the prospect of holding a presidential election within 90 days has led to political stalemate. It failed to quell the protesters’ anger as the movement has set the twin objectives of “changing the system” and establishing a democratic transition led by new, reliable and consensual political figures. The protesters have continued to protest, calling on the Army for the full implementation of Articles 7 and 8 of the Constitution which state respectively “The people shall be the source of all powers. National sovereignty shall belong exclusively to the people” and “The constituent power shall belong to the people. The people shall exercise their sovereignty through the institutions they establish.”

Holding elections under the same “system” in maintaining the same political figures was also utterly rejected by judges and local elected members in several cities and municipalities. They vowed neither to organize nor to supervise the polls.

Is the Algerian Constitution fit for transition?

A constitution is often defined as the fundamental law of a state which sets out in theory how the state should be organized and namely delineates allocation, transfer and distribution of power between different political entities and citizens.

In addition, a constitution covers such cases as the death, illness or resignation of the president but do not usually cover cases of revolutions or social movements demanding regime change.

The Constitution is being used to prevent any democratic transition towards regime change.

It is also true that a constitution cannot cover every aspect of political functioning or development, but comparative experiences demonstrate the limited use or misuse of the constitution during a time of system change.

By way of comparison, in neighboring Tunisia, the Constitution was merely suspended under similar circumstances in 2011 in the aftermath of the revolution. The Tunisian Constitution was suspended by the decree-law of 23 March 2011 providing for the provisional organization of public authorities as formulated by the High Authority presided over by Yadh Ben Achour at that time and adopted by the transitional head of State. Then, the Constitution was repealed by the law of 16 December 2011 providing for the provisional organization of the public authorities adopted by the elected Constituent Assembly.

While in Algeria for now, the Constitution is being used to prevent any democratic transition towards regime change. The regime is using the Constitution to ignore the people’s demands for change and democracy.

In a bid to gain public trust and popularity, the Army Chief of Staff called on the Justice Department to expedite investigations into cases of corruption and embezzlement. A number of well-known businessmen have been quickly arrested and brought to court indirectly confirming that the justice power is not independent and is again being used to ensure the survival of the “system”.

Legal or constitutional issues should be addressed during political meetings to be held as part of the transition roadmap. The results of dialogue and consensus to be achieved among the country’s various actors will allow drafting the legal requirements to ensure a smooth transition.

Thus far Algeria’s “system” has not shown any inclination to budge an inch and to accept any change while the gap with the millions of protestors is widening.

However, there has so far been no initiative aiming at starting dialogue with the main actors of the “Hirak” including representatives of universities’ students and professors, trade unions, professional bodies representing doctors, judges and lawyers, civil society members, and women’s organizations.

Several options are available to make the transition happen as claimed by the Algerian people and prepare for regime change. Based on comparative experiences and the past experience of Algeria, which already witnessed a similar movement in 1988, the following steps and bodies to be put in place might constitute a basis for talks around a possible road map:

1. A Council of State to be made up of 3 to 5 prominent and consensual figures (women and men) shall be set up and pledge not to stand for legislative or presidential elections. Their role shall be limited to managing the transition period at the political and economic level. They shall have the powers of the country’s president; they shall form a technocratic transitional government. The body shall stand for a maximum period of one year. Its term shall end upon the election of a transitional president by the Constituent Assembly.

2. A Transitional Legal Committee shall be set up by the Council of State; it may be composed of prominent lawyers (10 in total - women and men). It is entrusted with the formulation of pieces of legislation governing the Independent Election Management Body (Transitional); the Constituent Assembly Election; the Political Parties and the electoral law. The body shall stand for a maximum period of one year. Its term shall end upon the election of the Constituent Assembly.

However, thus far Algeria’s “system” has not shown any inclination to budge an inch and to accept any change while the gap with the millions of protestors is widening.  It lacks a clear strategy and vision to manage the crisis. It is therefore playing for time entrenched behind the Constitution that has been tailored to the needs of ousted President Bouteflika and has been violated a number of times under his rule.

Soulef Guessoum is an Algerian expert specialized in elected assemblies and inclusive political participation in political transitions. She has worked in several countries including Tunisia, Libya, Egypt and Somalia.