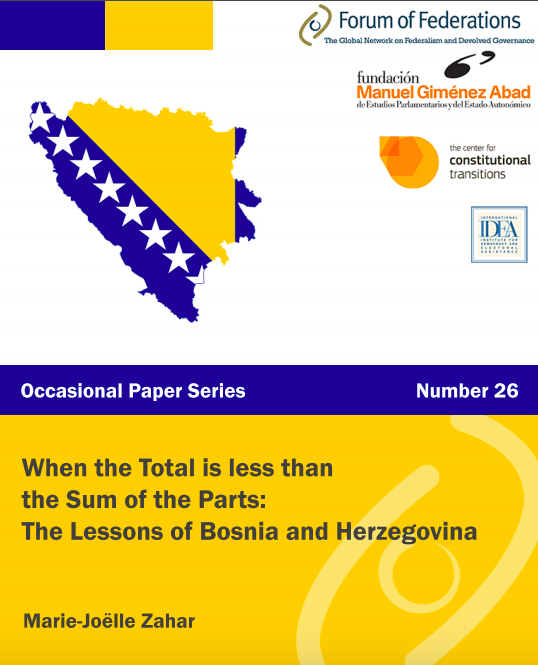 As part of a special project, Forum of Federations, Manuel Gimenez Abad, the Center for Constitutional Transitions and International Idea collaborated on an exclusive series of Occasional Papers examining territorial cleavages in a multititude of countries. This volume by Marie-Joëlle Zahar is the second in this series. Please see all the released OPS in this series here:

The territorial reorganization of Bosnia and Herzegovina (BiH) is one of the key outcomes of the Dayton Peace Agreement (DPA), the US-brokered agreement that brought the conflict in Bosnia and Herzegovina to an end. As they sought to silence the guns, the mediators behind the DPA struggled with the need not to reward the ethnic cleansing that harkened back to Europe’s darkest hours while having to acknowledge that ethnic cleansing had, in fact, profoundly affected the demography of the country. The result was a complicated structure. Bosnia was reorganized as a consociational federation comprising two entities: Republika Srpska (RS) and the Federation of Bosnia and Herzegovina (FBiH). In many ways, the territorial restructuring agreed at Dayton could be perceived as ‘ground zero’ for many of the other cases in this volume.

This Occasional Paper analyzes the impact of territorial restructuring in BiH and the context in which it took place. The restructuring of Bosnia was decided behind closed doors and under international pressure. The process was brief and backward (rather than forward) looking in the sense that it was primarily driven by the imperative to end the war. The Bosnian case study thus serves as a harbinger of the unintended and detrimental consequences that follow from poor process. It tells the tale of a territorial restructuring driven by strategic considerations that resulted in the hardening of contentious ethnic identities, the capture of the state by ethnic entrepreneurs, and the subsequent inefficiency, instability, yet unexpected resiliency of the BiH.