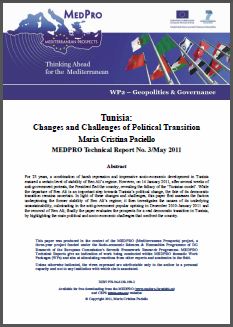 This paper was produced in the context of the MEDPRO (Mediterranean Prospects) project, authored by Maria Cristina Paciello in May 2011.

For 23 years, a combination of harsh repression and impressive socio-economic development in Tunisia ensured a certain level of stability of Ben Ali’s regime. However, on 14 January 2011, after several weeks of anti-government protests, the President fled the country, revealing the fallacy of the ‘Tunisian model’. While the departure of Ben Ali is an important step towards Tunisia’s political change, the fate of its democratic transition remains uncertain. In light of these changes and challenges, this paper first assesses the factors underpinning the former stability of Ben Ali’s regime; it then investigates the causes of its underlying unsustainability, culminating in the anti-government popular uprising in December 2010-January 2011 and the removal of Ben Ali; finally the paper evaluates the prospects for a real democratic transition in Tunisia, by highlighting the main political and socio-economic challenges that confront the country.