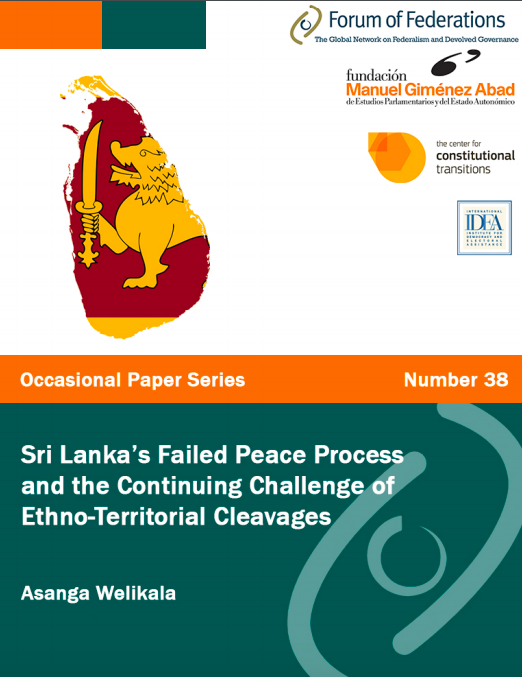 Despite an auspicious start to independent statehood following British decolonisation in 1948, Sri Lanka soon dissipated its early promise in a quagmire of ethnonationalism, institutional decay, authoritarianism, and civil war.1 Compared to the complexity of many other Asian and African postcolonial states contending with ethno-territorial pluralism, including notably India, the Sri Lankan situation seems at first straightforward. Its ethno-territorial conflict stems from the Sinhala-Buddhist majority’s dominance over the island’s politics and government, and in response, the minority Tamils’ desire for self-government in the northeast. The ethnic division between Sinhalese and Tamils is thus replicated in a territorial cleavage between the ‘south’ and the ‘northeast’, so that fairly conventional constitutional strategies of nation-building and power-sharing would seem adequate to accommodate these competing claims.2 Yet the conundrum is that the Sri Lankan state has consistently failed to devise a constitutional order in congruence with its societal pluralism, and, despite over half a century of reform attempts, this seemingly easy problem has so far defied resolution.

This Occasional Paper focuses on one of the most concerted attempts made to find a constitutional resolution of the conflict: the Norwegian-facilitated peace process between the government of Sri Lanka and the Liberation Tigers of Tamil Eelam (LTTE), roughly from 2001 to 2005. This process was marked in significant ways by methods associated with the liberal peace-building model, while simultaneously reflecting the closed and elitist character of Sri Lankan constitutional politics.3 Its failure led to a final phase of military conflict in which the government comprehensively defeated the LTTE in May 2009 and then, as victor, was hostile to any concessions to Tamil aspirations to regional autonomy— something which has changed only recently with a change of government. The chapter highlights various weaknesses of this model of conflict transformation and constitutional transition, in a context of limited constitutional imagination on both sides, hyper-competitive southern electoral politics, the breakdown of cohabitation at the centre, the failure to mitigate the effects of ethnonationalist antagonisms, and the critical absence of public participation. The failure to inform and engage sceptical constituencies in particular led to a significant democratic deficit in the process.

Constantly harried by day-to-day challenges of political crisis management, the peace process never matured sufficiently for constitutional negotiations of any depth to take place, although the parties did manage on one occasion to articulate the fundamental principles of a constitutional settlement, embodied in the Oslo Communiqué of December 2002, that may well be of relevance for the future. The election of a more moderate government in January 2015, the successful enactment of several democratic and governance reforms in May, the election of a new Parliament in August in which moderate parties across the ethnic divide have emerged victorious, and the commencement in March 2016 of a constitutional reform process through Parliament sitting as a Constitutional Assembly, give rise to cautious optimism that devolution reforms will follow.  But it remains so far the story of a failure, from which, nonetheless, lessons can hopefully be drawn as Sri Lanka embarks on a new era of constitutional reform.