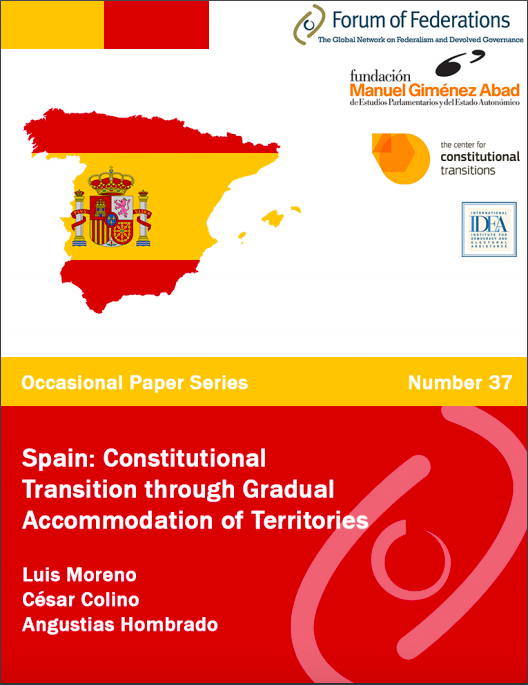 Forum of Federations, Fundacion Gimenez Abad, International IDEA and The Center for Constitutional Transitions are proud to present the 13th Occasional Paper which explores Spain’s use of accommodation and devolution to tackle their challenges.

Spain’s peaceful transition to democracy (1975-79) offers an example of how a political agreement could overcome internal confrontations. In contemporary times, Spain experienced a cruel Civil War (1936-39) and a long period of dictatorship under General Franco’s rule (1939-75). At the death of the dictator, the opposition mobilized around left-right cleavages as well as around several territorially based nationalist movements that had been repressed by Francoism. The moment of constitutional transition, which would last from 1977 to 1979, arose from an alliance between moderate reform factions in the elites of the old dictatorship, supported by the new King, with opposition elites. Together, they agreed to call for elections and establish a full-fledged democratic regime amidst a great economic crisis, intense public mobilization and some instances of political violence. This constitutional moment would culminate in the passing of the 1978 Constitution, although the implementation of new territorial institutions would extend for several more years. But in less than a year and a half, from 1976, the country experienced the self-dissolution of the Francoist Parliament, the legalization of the Communist, and many other, parties; the call for democratic elections; the signing by all political and social forces of pacts to resolve the economic crisis; the restoration of the Generalitat of Catalonia and other pre-autonomy regional regimes and, finally, the approval of a democratic Constitution in December 1978.

This constitutional pact ‘refounded’ the Spanish state as a democracy and reinstituted the rule of law. It laid down the preconditions for the creation of a welfare state and the overcoming of the economic crisis. By recognizing nationalities and regions throughout the Spanish territory, it responded to old aspirations of autonomy not just in the territories with nationalist movements but in all regions, which shared the aspiration for economic development and democratization of the state. Thus, based on a wide consensus of both the national parties of the left and right as well as of the regional parties, the 1978 Constitution enabled the creation and institutional accommodation of seventeen regions and nationalities or “autonomous communities” (Comunidades Autónomas, ACs). This was given effect subsequently by the constitutional recognition of regional home-rule and cultural diversity and the extensive decentralization of powers and finance.

This recognized the existence of different languages, political traditions, and distinct civil-law traditions. It also endorsed some constitutional asymmetries notably concerning the funding of some ACs. Decentralization would enable nationalist parties both to form governments in Catalonia and the Basque Country during the first 30 years of democracy and to participate in governance at the center. This promoted the integration and legitimacy of the new Spanish system for many years, though challenges remain. The Spanish case also shows the importance of a conscious willingness of reconciliation among the elites and its determination to avoid the mistakes considered to have led to the demise of democracy and to civil war in the 1930s. Moreover, the introduction of a moderately proportional electoral formula, country-wide elections early in the process, and the design of a very inclusive and deliberative process of constitution-making to produce new institutions created a positive dynamic. This operated together with the moderation and demobilization of the mass movements and the support of new and “reborn” parties from both the left and ethnic-regionalist, in favour of a successful negotiation and accommodation between elites of a new constitution. Despite profound continuing disagreements among the parties, a large majority of the political actors and the electorate approved the final results of the negotiations without producing clear losers of the process. Only persisting ethnonationalist violence in the Basque Country for three decades, now finally ended, can be regarded as an exception to this overall positive assessment. The current secessionist bid of a radicalized Catalan nationalist movement and the government of Catalonia also raise questions about the sustainability of the model.