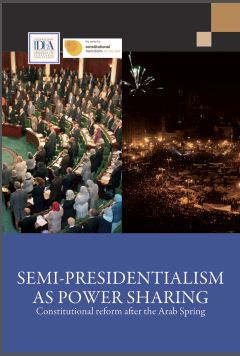 Semi-Presidentialism as Power Sharing: Constitutional reform after the Arab Spring

This report, Semi-Presidentialism as Power Sharing: Constitutional reform after the Arab Spring, assesses the contribution that the semi-presidential form of government can make to consolidating democracy and preventing the reemergence of presidential dictatorship in the MENA region. The political history of many of the countries in the Middle East and North Africa (MENA) region over the last 60 years has been one of strong presidents and weak legislatures. The democratic revolutions of the Arab Spring created the opportunity to reconstitute the political system in a way that marks a fundamental break from the dictatorships of the recent past. This report analyzes a range of options for designing a semi-presidential system, considering the extent to which these options can ensure: (1) limited presidential power, (2) an effective legislature capable of exercising oversight of the president and the government, (3) effective and meaningful power sharing between the prime minister and the president, and (4) presidential leadership in times of crisis.