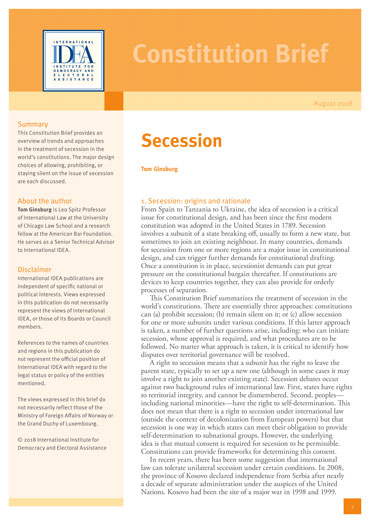 From Spain to Tanzania to Ukraine, the idea of secession is a critical issue for constitutional design, and has been since the first modern constitution was adopted in the United States in 1789.

Secession involves a subunit of a state breaking off, usually to form a new state, but sometimes to join an existing neighbour. In many countries, demands for secession from one or more regions are a major issue in constitutional design, and can trigger further demands for constitutional drafting.

Once a constitution is in place, secessionist demands can put great pressure on the constitutional bargain thereafter. If constitutions are devices to keep countries together, they can also provide for orderly processes of separation.

This Constitution Brief provides an overview of trends and approaches in the treatment of secession in the world’s constitutions. The major design choices of allowing, prohibiting, or staying silent on the issue of secession are each discussed.