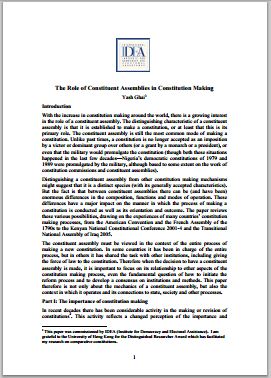 What is a constituent assembly? What role does it play in the process of constitution making? How is it established? What is its structure and composition? How does it differ from other deliberative bodies with sovereign and constituent powers such as the legislature? With the increase in constitution making around the world and the prominence of constituent assemblies as the primary and most common mode for making constitutions, this paper seeks to answer these questions. Among others, it draws on various experiences such as the American Convention and the French Assembly of the 1790s the Kenyan National Constitutional Conference 2001-4 and the Transitional National Assembly of Iraq 2005.

"This paper was commissioned by International IDEA. I am grateful to the University of Hong Kong for the Distinguished Researcher Award which has facilitated my research on comparative constitutions."

Click the link below to read this issue paper: