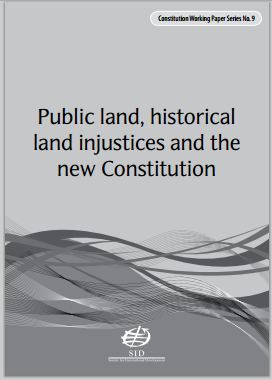 Below is an abstract from Working Paper No. 9 "Public land, historical land injustices and the new Constitution", published by the Society for International Development (SID), Regional Office for East & Southern Africa. The author of this paper is Paul Syagga.

"This study examines the genesis of public land ownership and its disposition in the post-colonial era, how this has disadvantaged some sections of society and given rise to claims of historical land injustices. From this analysis, the study makes proposals on how best to redress historical land injustices and disputed land allocations, as well as the institution of an effective National Land Commission as envisaged by the Constitution. The study makes four significant recommendations: 1. The public must be sensitized through civic education on the benefits of land reform; 2. The National Land Commission should be sufficiently funded, be accessible to the public, and be empowered to impose significant penalties; 3. The establishment of a Land Claims Tribunal is recommended to handle land restitution claims; 4. Redistribution and resettlement programs must be guided by a legal framework that ensure fairness and transparency."