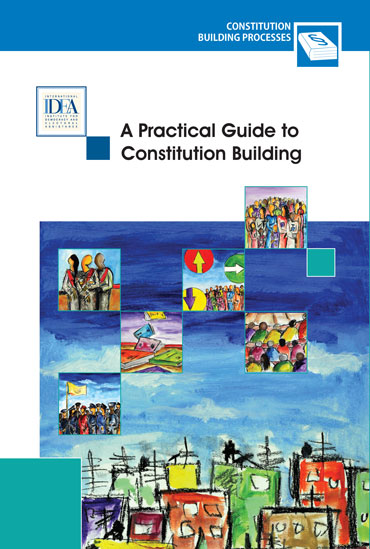 A Practical Guide to Constitution Building

The content of a constitution provides a blueprint for the operation of a state, guarantees rights and outlines mechanisms for their enforcement, as well as shapes the future of a nation.

Constitutions that emerge after conflict are often a result of negotiated settlements and competition between many forces including identity-based groups, former parties to conflict, political and military actors and international actors.

This Handbook provides an essential foundation for understanding constitutions and constitution building. Full of world examples of groundbreaking agreements and innovative provisions adopted during processes of constitutional change, the Guide offers a wide range of examples of how constitutions develop and how their development can establish and entrench democratic values.

Beyond comparative examples, the Handbook contains in-depth analysis of key components of constitutions and the forces of change that shape them. It analyses the adoption of the substantive elements of a new constitution by looking at forces for the aggregation or dissemination of governmental power, and forces for greater legalization or politicization of governmental power, and examining how these forces influence the content of the constitution.

This handbook is designed as a box which includes seven separate chapters.