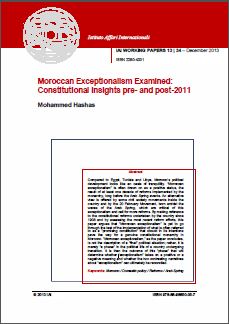 This is a working paper No. 13/34 issued by the Institute of International Affairs (Istituto Affari Internazionali) in Rome in December 2013. The writer of this paper is PhD. Mohammed Hashas.

Compared to Egypt, Tunisia and Libya, Morocco’s political development looks like an oasis of tranquillity. “Moroccan exceptionalism” is often drawn on as a positive status, the result of at least one decade of reforms implemented by the monarchy, long before the Arab Spring events. An alternative view is offered by some civil society movements inside the country and by the 20 February Movement, born amidst the waves of the Arab Spring, which are critical of this exceptionalism and call for more reforms. By making reference to the constitutional reforms undertaken by the country since 1908 and by assessing the most recent reform efforts, this
paper argues that “Moroccan exceptionalism” is yet to go through the test of the implementation of what is often referred to as a “promising constitution” that should in its intentions pave the way for a genuine constitutional monarchy in Morocco. “Moroccan exceptionalism,” as the paper concludes, is not the description of a “final” political situation; rather, it is merely “a phase” in the political life of a country undergoing transition. It is then the outcome of this “phase” that will determine whether “exceptionalism” takes on a positive or a negative meaning and whether the two contrasting narratives about “exceptionalism” can ultimately be reconciled.