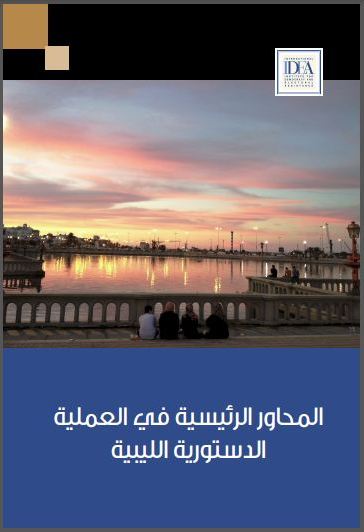 This English version of the "Libya Constitution Building Manual" is not final and is published and circulated merely for the benefit of those individuals who are interested or who are involved in the Libyan process and who do not read Arabic. The only official and final version of this Manual was published by International IDEA in Arabic, which departs from the English version in a number of respects, is available for free download here:

It consists of five chapters, covering traditional areas of importance (including the separation of powers, fundamental rights, and decentralization) as well as some areas that are specifically relevant to Libya (including natural resources and corruption). The Manual does not proceed along classical lines; it focuses mainly on those areas that have been identified as being particularly relevant to Libya. This Manual focuses on the principal methods that are used by modern constitutions to protect the application of rights in practice.

The Manual draws on comparative experience from the Arab region (in particular, the new constitutions that have been developed in Egypt, Tunisia, Morocco and Jordan since 2011), Europe, Latin America, North America, Africa and Asia. As always, this Manual respects IDEA’s commitment to independent, objective, informed and non-prescriptive analysis. None of this Manual’s sections are designed to achieve any objective other than to assist the constitutional drafters and all other interested parties in their efforts to establish a democracy in the region.