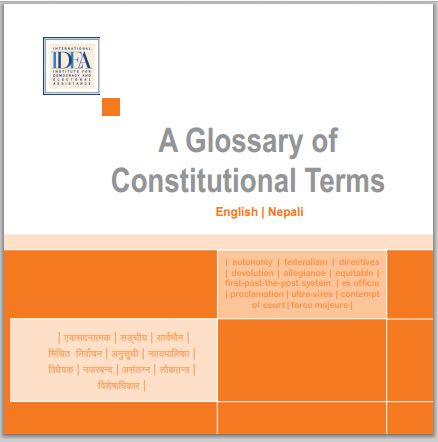 Nepal is at a critical juncture and needs to debate and draft a new constitution through a constituent assembly. While debating and constitution making amount to political action, drafting a constitution and its supporting laws are more technical processes, which are no less important.

Constitutions are legal texts and must be written in a style that is objective, clear and precise. To reflect the intentions of the law makers, drafters of constitutions and other laws must understand the full meaning of legal terms and the implications that the words used will have and then use the clearest words and formulations consistently. Today the drafting of a constitution and supporting laws calls for a special style of writing that can be understood by ordinary people and not only by select groups of judges and lawyers.

Many legal terms, initially developed through Latin-based languages, literally get lost or mangled in translations, or are defined by varied users in differing contexts, creating ambiguity and confusion. International IDEA seeks to support the constitutional process in Nepal through the development of this glossary of constitutional and legal terms. The purposes of this glossary are threefold: to establish Nepali equivalents of English constitutional terms, to standardize Nepali terminologies and to contribute to the development of plain language drafting of legal and constitutional texts at this critical juncture.

The Glossary contains the following: