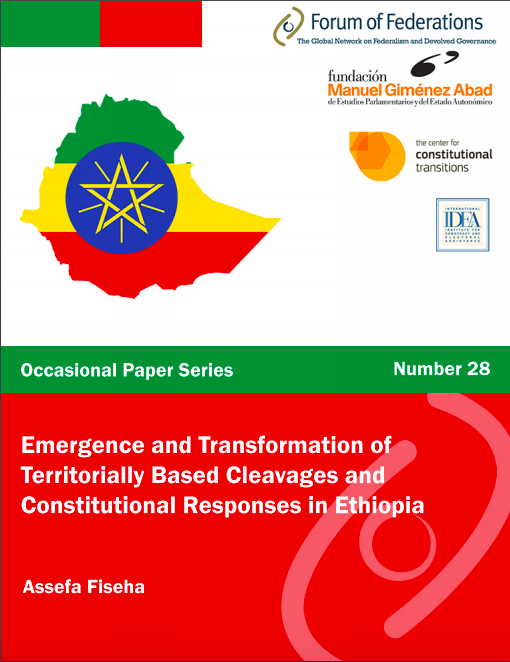 Forum of Federations, Fundacion Gimenez Abad, International IDEA and The Center for Constitutional Transitions are proud to present the 4th Occasional Paper which explores Ethiopia’s transition in our special series on constitutional transitions!

On March 13, 2014 Time published an article entitled ‘Forget the BRICS and meet PINES’, which reported on Ethiopia’s socio-economic progress. In the last decade, Ethiopia has shown a continuous 10 -11% annual economic growth, including improved access to education, health facilities and the massive expansion of road, rail and telecommunications infrastructure. Several hydroelectric dams are boosting its economy and it plans to be the energy giant of the Horn region, exporting electricity to neighbouring countries. This chapter tells the story of Ethiopia’s remarkable political transformation, which has underlay these successes but has important weaknesses as well.

Ethiopia has enormous diversity and a long history of independence. However, the modern Ethiopian state emerged towards the end of the 19th century after Emperor Menlik II (1889-1913) incorporated under his control previously quasi-autonomous kingdoms in the South, the Southwest and the East. While central power in ancient Ethiopia was partly accessible to provincial and regional forces, with the emergence of centralized state, these forces were largely shut out. The newly centralized and homogenizing state, which incorporated the old provinces, was presided over by a narrow centralizing ruling elite. In reaction, there arose with the Ethiopian Student Movement a class and broadly based ethno-nationalist political mobilization that put forward an alternative for state reform during the early 1970s. The then governing elite lost its momentum while the student movement inherited the burden of providing a political solution to the ‘question of nationalities’ and in doing so it adopted a Marxist – Leninist interpretation to the nationality question, which was also a factor in radicalizing it.

Ethiopia’s constitutional transformation resulted from the collapse of the socialist dictatorship and the victory of a coalition of ethno-nationalist insurgent forces. The new rulers rejected the centralization and cultural homogenization of the past and designed a federal system that aims to empower ethno national groups at regional state level. Ethiopia’s case indicates that it is hardly possible to contain politically mobilized, territorially based ethno-nationalist groups short of a federal arrangement that allows such groups to exercise some self-rule at a regional level while ensuring representation at the federal level. This institutional design has by ending the protracted civil war that brought the country to the brink of collapse in 1991, promoted relative peace and political stability to the country in an otherwise conflict prone region. Yet its functioning has been characterized by the strong dominance of the governing party coalition, which has limited state autonomy, political pluralism and democratic rights. Its strong focus on ethno-nationalist rights has also created problems for minorities and individual citizens within the regional states. But despite these political shortcomings, the new regime has proven able to deliver much needed services and ensure equitable development throughout the country, accomplishments that are critical to its success and stability.