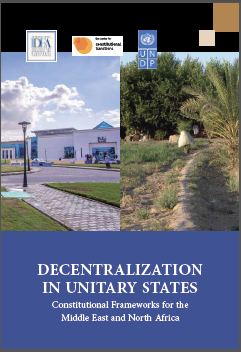 Constitutional Transitions, International IDEA and the United Nations Development Programme are  proud to announce the release of the last three reports in the series of thematic, comparative research reports on issues in constitutional design that have arisen in the wake of the Arab Spring. The three reports address timely issues, which impact the MENA region and beyond, and will be of use to scholars, researchers, policy makers, constitutional drafters, judges, and advocates. The issues in the three reports, corruption, natural resources, and decentralization, have been catalysts for the recent social movements in the region. The reports study existing frameworks within the region, including some of the new constitutions that were drafted since the uprisings began in late 2010, as well as a large number of comparative examples from other jurisdictions, to determine what lessons exist for the broader region.

This report, Decentralization in Unitary States: Constitutional Frameworks for the Arab States Region, explores the important issue of how decentralization can be implemented in unitary countries to deepen democratic values and improve the quality of life and human security in neglected communities. The report addresses the benefits of decentralization to the MENA region and how constitutional incorporation of various principles can increase opportunities for decentralization and help improve standards of living throughout the region.