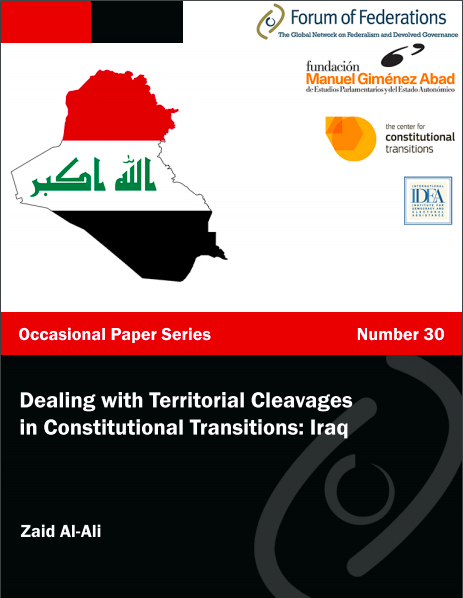 Forum of Federations, Fundacion Gimenez Abad, International IDEA and The Center for Constitutional Transitions are proud to present the 6th Occasional Paper which delves into Iraq’s ongoing constitutional challenges.

Iraq’s territorial cleavage between Arabs and Kurds was prioritized throughout the entire transition process but was so seriously mismanaged that it has caused detriment to the country’s entire system of governance. The interim constitution was the first attempt to resolve the issue, at least on a temporary basis. It provided for the establishment of Iraq’s first federal arrangement and for provinces to merge together and form larger regions, which had the potential to seriously change Iraq’s internal arrangements.

The text was conceived through a US-led and undemocratic negotiation process that excluded a large number of Iraqi actors. After January 2005, the newly elected interim parliament composed a 55 (later 70) member constitution drafting committee. That committee adopted a majoritarian approach to decision making, which pushed the draft in favor of a more traditional form of federalism, but which left minority views (generally those of the Kurdish negotiators) unrepresented. Rather than prolong the process and insist on a more consensual approach, the US embassy and a small number of Iraqi allies decided that the negotiations should continue on an invitation-only basis, which excluded a large number of actors. The draft constitution that emerged from that new process was heavily inspired by the interim constitution. Although that draft was approved in the October 2005 referendum, a large segment of Iraq’s political class has refused to apply the federal system of government (the constitution’s cornerstone) and its provision on natural resources. The result is that Iraq’s territorial cleavage has been left unresolved and has been festering since 2005.

Zaid Al-Ali examines this process in detail in Occasional Paper 30 as part of our continuing series on constitutional transitions.