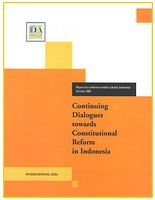 How to best address the role of customary governance structures in a variety of current and potential future democracy-building contexts was the core question at the conference, jointly organized by the United Nations Economic Commission for Africa (UNECA) and International IDEA, in Addis Ababa, Ethiopia in September 2011.

In many contexts ‘formal’ and ‘informal’ governance structures cannot easily be separated. Participants at this conference recognized the need to develop an approach to democracy building that seeks to match and combine these seemingly parallel systems of governance while formulating effective ways of dealing with instances where they diverge.

In addition, the importance of ‘customizing the democratic’—and at the same time ‘democratizing the customary’—is essential if democracy is to be considered truly legitimate by the world’s populations. A key conclusion of the discussions was recognizing and paying attention to contextual specificity; regional, national or local.

The conference brought together 70 experts from around the world, to develop a comparative analysis of the role and functioning of customary governance structures, promoting better informed and more effective democracy-building efforts.

You can read this publication or download it from the link below: