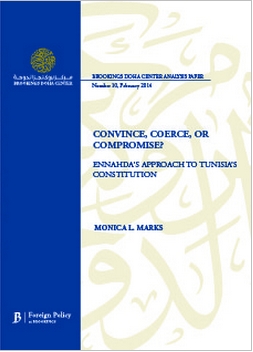 After two years and four drafts, Tunisia’s new constitution was finally approved on January 26, 2014 – the first constitution freely created by a democratic assembly in the Arab world. During the drafting process, many questions were raised about Ennahda’s role in writing the new constitution. Did Ennahda and its supporters pursue an aggressive Islamist agenda on matters such as blasphemy and gender equality? If not, what debates and divisions within the party allowed it to make the necessary compromises and concessions that helped shape the final document?

In a new Analysis Paper by the Brookings Doha Center, Monica L. Marks calls for a more nuanced understanding of Ennahda and how it has operated in the Tunisian political scene. Drawing on extensive field research and interviews with Tunisian political figures and activists, Marks argues that Ennahda should be understood as a party of evolving positions and internal debate, rather than an Islamist monolith unwilling to give ground on key issues.

While not absolving Ennahda of its mistakes and missteps since the revolution, Marks calls on Tunisian actors and the international community to understand the vulnerabilities and challenges that the party, along with the rest of Tunisia’s political actors, faces in working to shape Tunisia’s future.

This analysis is also available in Arabic