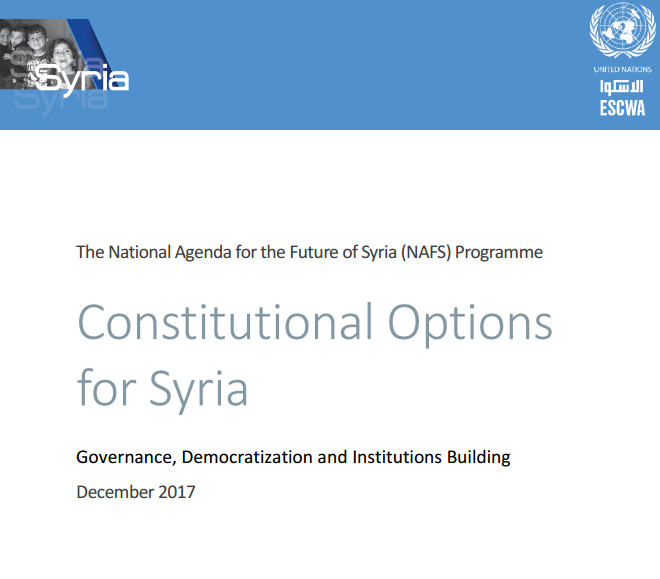 The United Nations Security Council Resolution 2254 of December 2015 had  expressed support for  a Syrian-led political process facilitated by the United Nations that “sets a schedule and process for drafting a new constitution.” This support builds on other  political discussions and recommendations including those from the Final Communique of the Action Plan for Syria (Geneva I) of July 2012 that raised the possibility of drafting a new constitution for the country.

One of the main activities of the National Agenda for the Future of Syria, given its objective to assist in  a  post-conflict  recovery  and  reconstruction  period  in  Syria  that  promotes  reconciliation  and reflects the needs and priorities of a broad range of Syrian people, is providing substantive support and input to ongoing international negotiations on Syria’s future. This position paper outlines NAFS suggestions for constitutional options in the post-conflict phase for a temporary and permanent constitution. It builds on several years of stakeholder meetings and discussions on governance options for Syria in the post-conflict phase as well as the NAFS Strategic Policy Alternative Framework.

What follows is a summary of the key conclusions of the research study.

The National Agenda for the Future of Syria (NAFS) Programme, United Nations Economic and Social Commission for Western Asia