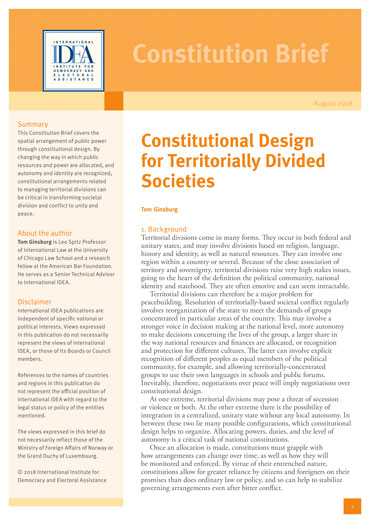 Territorial divisions come in many forms. They occur in both federal and unitary states, and may involve divisions based on religion, language, history and identity, as well as natural resources.

They can involve one region within a country or several. Because of the close association of territory and sovereignty, territorial divisions raise very high stakes issues, going to the heart of the definition the political community, national identity and statehood. They are often emotive and can seem intractable.

This Constitution Brief covers the spatial arrangement of public power through constitutional design. By changing the way in which public resources and power are allocated, and autonomy and identity are recognized, constitutional arrangements related to managing territorial divisions can be critical in transforming societal division and conflict to unity and peace.