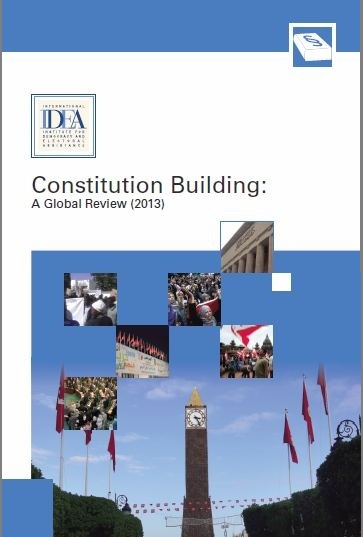 International IDEA has released a new report in Septemebr 2014 on Constitution Building titled: Constitution building: A Global Review (2013). This report provides a review of a series of constitution building processes across the world, highlighting the possible connections between these very complex processes and facilitating a broad understanding of recurring themes.

While not attempting to make a comprehensive compendium of each and every constitution building process in 2013, the report focuses on countries where constitutional reform was most central to the national agenda. It reveals that constitution building processes do matter. They are important to the citizens who took part in the popular 2011 uprisings in the Middle East and North Africa seeking social justice and accountability, whose demands would only be met through changing the fundamental rules of state and society. They are important to the politicians and organized interest groups who seek to ensure their group’s place in their nation’s future. Finally, they are important to the international community, as peace and stability in the international order is ever-more dependent on national constitutional frameworks which support moderation in power, inclusive development and fundamental rights.

The chapters of this annual review included:

Chapter 3: Women and constitution building in 2013

Chapter 4: The judiciary and constitution building in 2013

Chapter 7: The military and constitutional transitions in 2013

Annex I: Timelines in selected countries