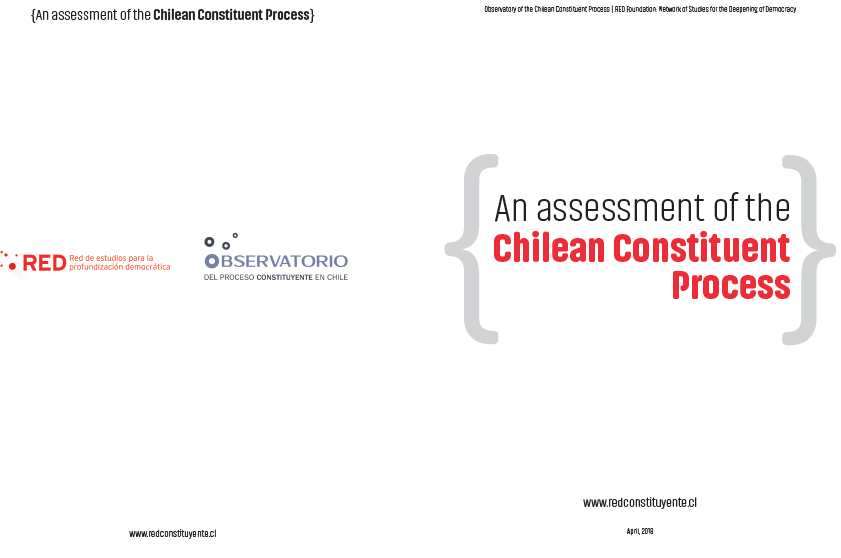 The Observatory of the Chilean Constituent Process is project of the RED Foundation: Network of Studies for the Deepening of Democracy, with support from the Ford Foundation, which has been dedicated to monitor and assess the constituent process that has been taking place in Chile since at least 2011, and more clearly with the election of Michelle Bachelet’s to a second presidential term (2014-2018). The process, pushed forward by the civil society and later by the government, aims at replacing the 1980 Constitution, drafted and enacted under the Pinochet dictatorship and which, despite numerous amendments, has been unable to gain full legitimacy in the eyes of the citizenry and part of the political establishment. Through different reports made by experts in the area, the Observatory provides to different audiences a critical assessment of the constituent process, taking into consideration the multifarious ideals of participatory democracy and values such as transparency, inclusion and deliberation, and examines the social, political, institutional, and legal conditions which favor or hinder its progress along those lines.

The second report provides an overview of the “Chilean Constituent Process under the Bachelet Presidency”, describing the popular origins and current institutional articulations of the demand for a new constitution. This report is rich in details, explaining to a general audience the itinerary of the constituent process, focusing specially on the initiatives triggered by the former government. Within a critical background, this report evaluates both formal and informal political public spheres and the different obstacles that the advocates for a new Constitution had to face. It discusses both procedural requirements included in the current constitutional arrangement, which inhibits a reasonably democratic deliberation, and the different standards of participation and transparency that characterized a much celebrated participatory and popular stage, and the contrast with an opaque “institutional” process of drafting a bill that is, nowadays, stalled in Congress.

Finally, a report on the “Indigenous Constituent Process” that was implemented in parallel by the government, analyses its organization and evaluates its implementation under the standards of political participation that Chile has freely and democratically committed to observe before the national and international community. This final report provides a synthesis of the participatory process and indigenous consultation within the framework of the general constituent process, establishing a descriptive summary of the information available, covering the period from May 2016 to October 2017. Moreover, and after describing the normative framework in which the rights of indigenous peoples are granted (standards on political participation and prior consultation at international and domestic levels), the report offers a critical analysis about what has been done in the “constituent consultation processes”.

The reports were launched in front of Michelle Bachelet, in the main auditorium of the University of Chile: http://redconstituyente.cl/observatorio-del-proceso-constituyente-presenta-informe-a-un-ano-de-funcionamiento/

The Observatory of the Chilean Constituent Process - Project of the RED Foundation: Network of Studies for the Deepening of Democracy