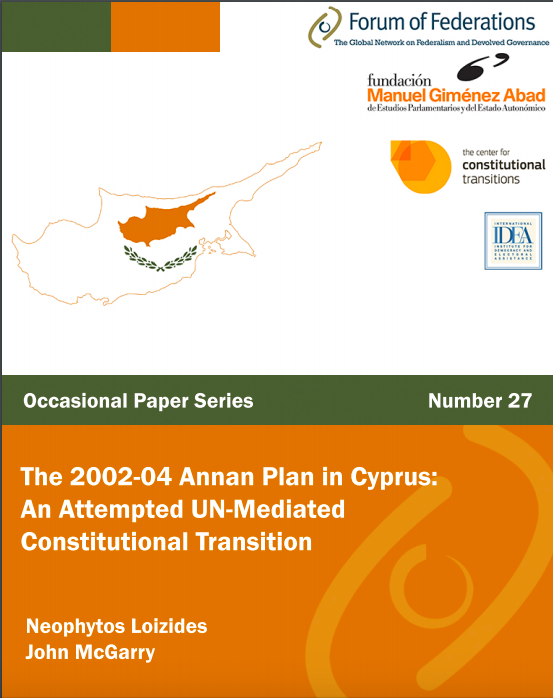 Forum of Federations International IDEA Fundacion Gimenez Abad and The Center for Constitutional Transitions are proud to release the THIRD Occasional Paper studying the experience of Cyprus in this special territorial cleavages project.

This Occasional Paper focuses on the 2002-2004 Annan Plan for Cyprus1 and, more specifically, on the period leading to its fifth and final version. Although problematic in many of its provisions, the Annan Plan attempted to secure agreement on a reunited federal Cyprus within the European Union2 and has been described as a major turning point in the recent history of the Cyprus problem.3 The Plan’s five successive iterations were widely debated, leading to a lengthy document submitted for popular ratification in each of the Greek Cypriot and Turkish Cypriot communities in April 2004. According to the UN Secretary General, most of its 9,000 pages were drafted by hundreds of Greek Cypriots and Turkish Cypriots whose extraordinary efforts produced one of the most comprehensive peace plans in the history of the United Nations.4 Despite the UN’s efforts to present a balanced document, the Plan was eventually rejected by the overwhelming majority (76 per cent) of Greek Cypriots, although it was endorsed by 65 per cent of Turkish Cypriots.5 Regardless of the outcome, the Annan Plan for Cyprus is an interesting case of an attempted peace settlement/constitutional transition not just because of its substantive provisions, but also as we argue below its process; it is also relevant for the current peace talks in Cyprus and for other divided polities where international mediators seek to resolve protracted stalemates through comprehensive constitutional formulas.

The Paper argues the Annan Plan had predictable adoptability problems with its provisions on power-sharing, sovereignty, security and human rights failing to include timely and credible incentives that would secure the support of elected political elites and undecided voters. The process was also handicapped by the design and timing of the referendums. Specifically, in what many impartial observers now see as a major diplomatic blunder, involving both the UN and the European Union, the referendums were held only after the accession of Cyprus (effectively the Greek-Cypriot controlled part) to the European Union had already been guaranteed. This removed the incentive of EU accession for the Greek Cypriots.

More broadly, the fate of the Plan raises a set of wider empirical and conceptual issues for the study of constitutional transitions particularly concerning how to ratify externally mediated peace agreements. Although the provision for twin Cypriot referendums seemed democratic, at the end it failed to legitimise the UN-endorsed constitutional transition. As this Occasional Paper demonstrates, the fear of an ‘imposed settlement’ has been central to the narratives of the two communities, particularly Greek Cypriots. The 1960 Constitution was forced on the communities, especially the Greek Cypriots.