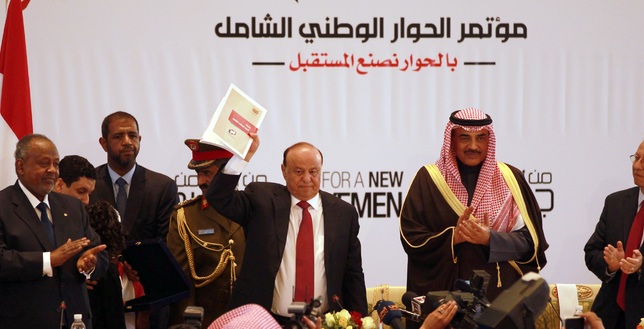 Yemen's President Abd Rabbu Mansour Hadi raises the book of recommendations from the country's National Dialogue Conference -- which will guide the drafting of a new constitution and establishment of a federal state.[Mohammed Huwais/AFP]
<p>The 17-member committee comprises representatives from across the political spectrum and will hold its first meeting a week after its formation. </p> <p>A day before the formation of the constitution-drafting committee, President Hadi reshuffled his cabinet in a move that included replacing the ministers of interior and oil. </p> <p>"President Hadi's decrees came in implementation of the recommendations of the <a href="http://al-shorfa.com/en_GB/articles/meii/features/2014/01/24/feature-02">National Dialogue Conference</a> (NDC)," which authorised him to carry out a cabinet reshuffle and form the constitution-drafting committee, said NDC Deputy Secretary-General Yasser al-Ruaini. </p>
Read the full article here: Al Shofa.com