In the United States, House of Representatives votes to remove deadline for Equal Rights Amendment 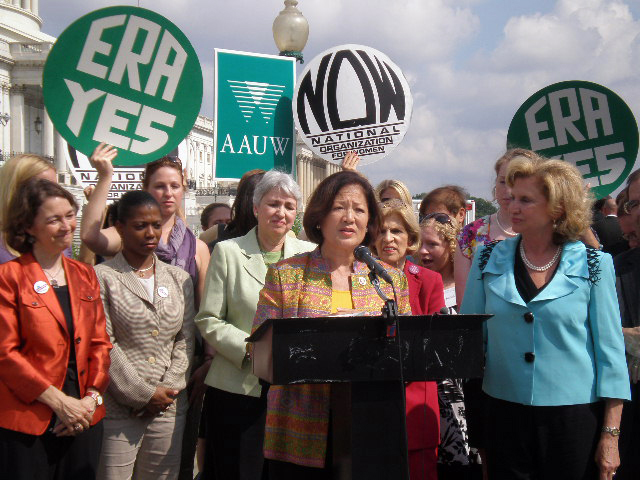 2010 rally for the Equal Rights Amendment (photo credit: National Organization for Women/flickr)
The House of Representatives voted on Wednesday to remove a key stumbling block for the Equal Rights Amendment, which would enshrine the principle of gender equality in the US Constitution. First introduced in 1923, the amendment would ban discrimination on the basis of sex, paving the way for people of all genders to challenge anything from unequal pay to restrictions on abortion. But the amendment has had a long road in American politics, and that road is far from ended. [ . . . ] There are still many obstacles ahead; the resolution needs to pass the Senate, where it will likely face Republican opposition. It’s also likely to face a legal challenge, as the Department of Justice under President Donald Trump issued a memo stating that Congress could not revive a proposed amendment after the ratification deadline had expired. Still, the vote Wednesday is a major step toward an amendment that, with a Democratic-controlled Congress and a new president in the White House, now stands a better chance of becoming law.
Read the full article here: Vox