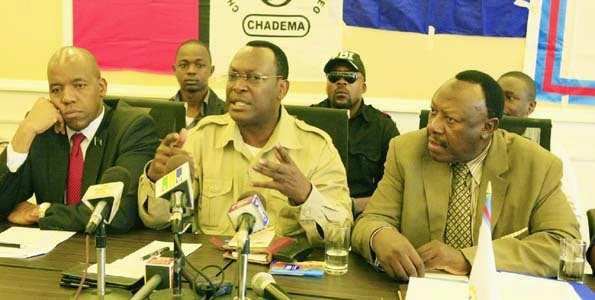 Following three months’ hiatus since April 25, to make way for the budget session, Tanzania’s Constituent Assembly (CA) finally reconvened on August 5 in Dodoma, the legislative capital, to continue debate on the draft Constitution. One key concern of many observers, as it reconvened, has remained the fate of the process—especially after the Coalition for the People’s Constitution, better known by its Kiswahili acronym UKAWA, announced its intention three days earlier to continue its boycott of the Assembly.

Justified or not, it has to be recalled that UKAWA’s initial walkout out on April 16, which thousands of Tanzanians watched on television, was not without cause. In their view, what was intended as a collaborative process characterised by dialogue and mutual respect had become a charade. A speech delivered shortly before the dramatic event by one of its Co-Chairs, Prof. Ibrahim Lipumba, who is also the Chair of the Civic United Front (CUF), very much reflects this view. He  declared that UKAWA was not prepared to see the draft constitution which contained the views of Tanzanians being put aside, nor to be part of a CA that was infested with ‘matusi’ (insults), ‘chuki’ (hate) and ‘ubaguzi’ (discrimination). He also faulted the ruling CCM party for not chastising divisive statements made in April by one of its own members, Minister William Lukuvi (who heads the Government’s parliamentary affairs portfolio), to the effect that a three tier government would push Zanzibar to become an Islamic state, leading to the takeover of the government by the army. The issue of how many governments the new Constitution should recognize, as I have written elsewhere, remains a contentious issue.

Other views are that UKAWA’s decision was in any case inevitable. According to one anonymous source: ‘The reality is that they can’t have their own way in the CA because they are numerically overpowered and are overwhelmed by the tactical maneuvers deployed by the ruling party bent to get its way.’

Another insider in the CA, Prof. Costa Mahalu, the Chair of the Regulations Advisory Committee, explained the crisis that led to UKAWA walking out as not due to the inadequacies in the CA regulations but rather because of political machinations. In an interview accorded to Mwananchi newspaper posted on May 4, 2014 Mahalu claimed that there was an attempt to disrupt the CA rather than allow it to meets its objectives. Prof. Mahalu also hinted that the partiality of the CA’s Chair in the way he exercised his prerogative to stop debates, change the order of procedure, and allocate speaking slots and times in the CA, contributed to the impasse.
Recognising the potentially destabilizing effect of UKAWA’s continuing boycott on the review process, which is now in its third phase, many individuals have taken initiatives to resolve the impact. From the former chair of the constitutional review committee Judge Warioba, the CA Chair Samuel Sitta, religious leaders as I have shown elsewhere, to President Kikwete, meetings have been held and calls reaching out to UWAKA have been made – but so far with no success.

Implications of the Walk Out

The promise of a new constitution before the 2015 General Election would be a defining moment not just for Opposition parties but for democratic culture in Tanzania. Yahya Hamad, the Secretary of the CA, describes the impasse as a “missed opportunity for both sides” - more so if the constitution making process is to be understood as fundamentally about dialogue and consensus building.

It was originally believed that UKAWA’s absence would deny the CA the two thirds majority required to pass constitutional provisions. But not all of the 201 appointed members of the CA walked out. Some members, although the number is not known, from organisations of persons with disabilities and women, and from institutions of higher learning, opted to remain in the CA for diverse reasons. Historically marginalised groups, in particular, are keen to ensure that their concerns are reflected in the proposed constitution that will be put to a referendum. Ideological pride aside, their objective is to ensure that their issues obtain constitutional recognition. Thus, while many supported UKAWA in principle, they realised that  their room for manoeuvre was limited

UKAWA—it must be recalled—is a coalition comprising some persons from the group of 201 appointed to the CA by the President as well as some members from Opposition parties. Opposition parties are however the true force of the Coalition. They have been at the forefront of the boycott. Through the leadership of the Chairs of the Civic United Front (CUF), Chama cha Demokrasia na Maendeleo (CHADEMA) and National Convention for Construction and Reform (NCCR)- Mageuzi which  are the three main political parties, UKAWA has shown prowess at navigating the political hurdles the CA has encountered. Their decision to continue the boycott is a great setback to the process in at least two fundamental aspects. Firstly, it deprives the less politically savvy Coalition members who chose to remain in the CA of strategic allies, who they will need when faced with the tyranny of the majority in the Assembly. Secondly, the counter discourse which they generate is taking place only outside of the CA committees, where it is unlikely to influence the final document on which a referendum will be called.

Already, significant changes have taken place that would have a bearing on the outcomes of discussions. Immediately after the CA reconvened its regulations were changed to enable the twelve committees to meet without interruption for a whole month before convening plenary sessions thereafter. The original arrangement was for committees to discuss two chapters of the Draft Constitution after which they would be brought to a vote before a plenary CA session. The original time allotted to the CA has expired and it is now meeting on borrowed time. The fear is that such change in approach could lead to the wholesale endorsement of provisions rather than a healthy objective debate of proposed provisions of the new constitution.

This has only fuelled more scepticism with regard to the whole process. Prof. Abdul Sherrif, one of the  UKAWA members who has opted to continue with the boycott, for instance, doubts if there is there is indeed any goodwill to make things right. He alludes to the threat made by Nape Nyaue, the ruling party’s publicity and propaganda secretary, to those who failed to tow the party’s line in the CA, warning they would be denied party nomination during the upcoming elections.

Others, such as Deus Kibamba of the Jukwaa la Katiba (JUKUTA) and Valery Msoka, CA member and Executive Director of the Tanzania Media Women’s Association, have gone as far as calling for the suspension of the CA until after the general Elections of 2015.
JUKUTA argues that it does not believe the CA will be objective in discussing a constitution that reflects popular aspirations when the overriding concern of politicians in the CA is the upcoming elections.

Msoka shares similar views. “There is a cloud over the CA process presently and it is best to reconvene afresh after the 2015 General Elections”, says the CA member, who also does not believe any meaningful discussion can take place under the current atmosphere as party lines have been drawn.

Various religious leaders have cautioned against pushing through a Constitution unilaterally, since this would mean that the process was one-sided and therefore flawed. Nzowa, a Muslim religious leader, urged that the regulations of the CA act as a common pact that have to be respected not violated.

Seif Sharrif Hamad, the Secretary General of the Civil United Front (CUF) and First Vice-President of Zanzibar, speaking on a popular TV political programme “45 minutes” advised addressing UKAWA’s key grievances as well as offering them assurances to secure their return to the CA.

Prof. Abdul Sherrif chair of the Zanzibar Katiba (Constitution) Forum, reveals that there was a proposal at the outset of the CA to begin discussions with the less contentious sections of the Draft as an important confidence building measure before tackling the difficult issues at the end. Instead, the majority thought it best to begin with that which they considered most objectionable, leading the CA to a deadlock.

Most Tanzanians remain hopeful that at the end of the review process, Tanzania will obtain a new constitution. The question is whether the contending parties in the review process will give way so that the process resumes on track.