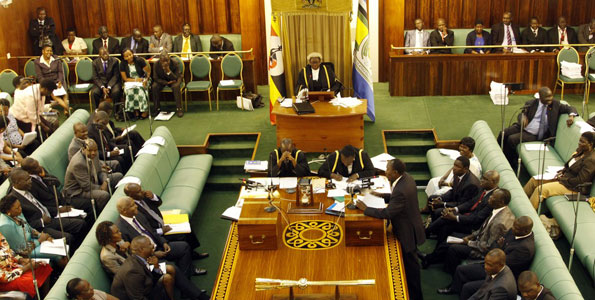 Ugandan Parliament [photo credit: The East African]
<p>At the 3rd reading of the Constitution Amendment bill, Ugandan Members of Parliament have voted overwhelmingly in approval of its passing. Of the 284 members present, 277 voted in favor of the bill, six opposed it while one chose to abstain. </p><p>Key amendments made include:</p><p>&nbsp;</p><p>1. The Bill has allowed the independent members of parliament less than 12 months to cross to political parties of their choice.</p><p><br>2. The Constitution Amendment Bill as passed rejected the proposal to increase the retirement age of Judges and Justices from 65 years to 70 years and 70 to 75 years for judges.</p><p><br>3. The new constitutional amendment bill has changed the Electoral commission name to the independent Electoral commission.</p>
Read the full article here: Independent