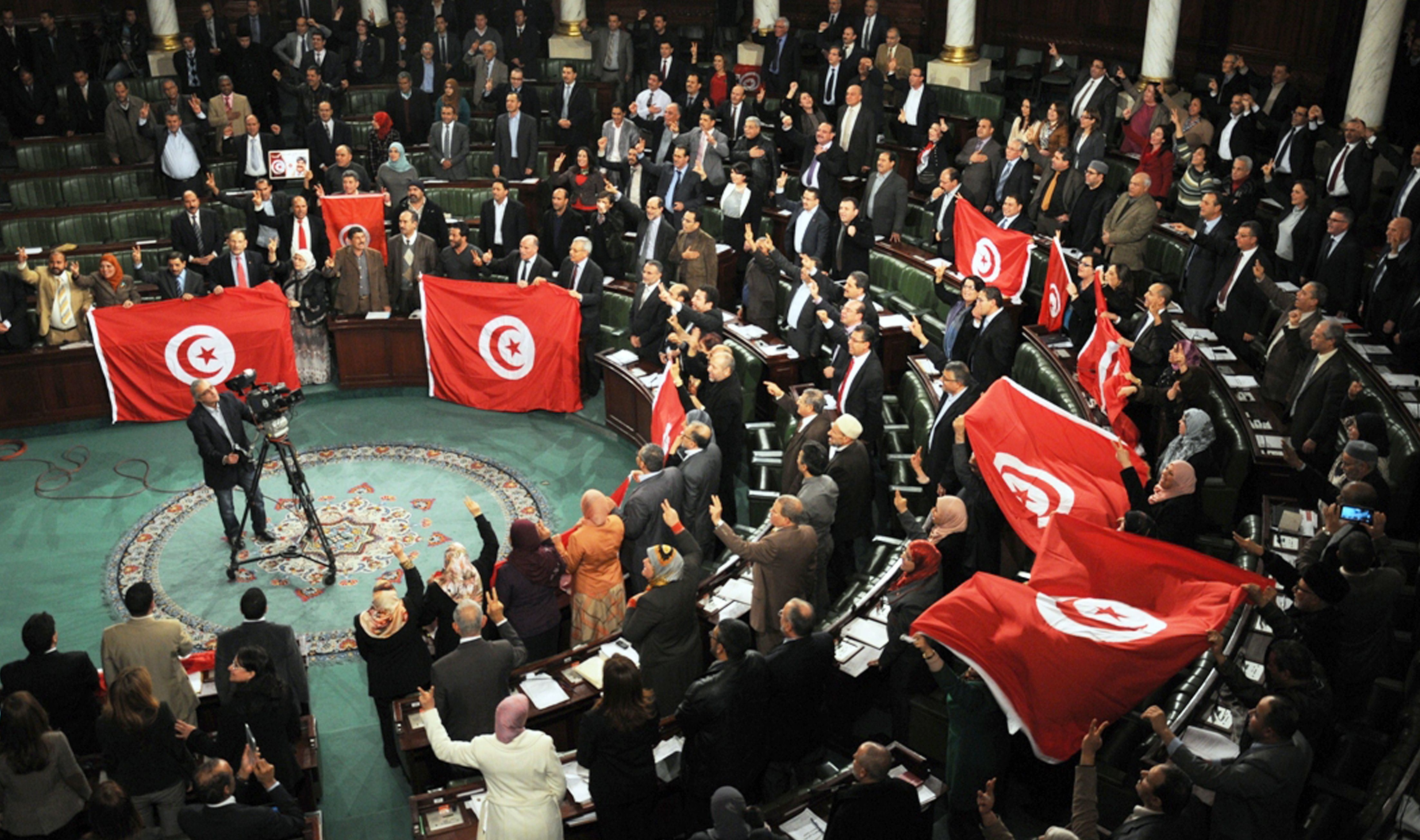 On 1 May 2014 Tunisia’s National Constituent Assembly (NCA) adopted a new electoral law by 132 votes to 11, with nine abstentions. The law’s adoption is another milestone in the democratic transition process and the implementation of the new Constitution adopted on 27thJanuary. It comes less than a month after the adoption on 18thApril of organic law n° 14-2014 on the Interim Constitutional Court, which will play a key role in reviewing the constitutional validity of new legislation in the short to medium term.

The election law paves the way for organizing parliamentary and presidential elections to equip the country with its first permanent political institutions since the dismantling of Ben Ali’s regime three years ago. The law establishes a two-round majority system for electing the president, a party-list proportional representation system which allows for the representation of smaller parties. In addition, it rejects the proposed political exclusion of members of the ancien regime thereby settling an issue which has been highly divisive during the transition. As a step towards increasing female representation in politics, it also calls for gender parity through vertical alternation at the level of the electoral lists. As such, if the head of the list is a man, the alternate must be a woman.

The law’s adoption, as that of the interim constitutional court before it, was not without controversy. Debates were often tense, with an ever-present risk of a breakdown as different camps traded angry tirades. The issue of political exclusion of the old guard and gender parity provoked the most polemic. They merit some attention as this was not by accident.

For supporters of a political exclusion provision, such a clause—despite being contrary to the spirit of the new constitutional order— was the only way to protect democratic gains and prevent a return to authoritarianism. Former regime collaborators, they argued, embodied this authoritarian past, and should therefore be held accountable for their actions, and not allowed to return to the political scene. The first stage of doing this, in their view, should be to exclude them from electoral competition while exploring other ways to hold them fully accountable through transitional justice mechanisms.

Opponents, on the other hand, argued that the electoral law should give effect to the universal right to vote and to be voted into office, in conformity with Tunisia’s Constitution and international commitments. In their view, justice and accountability for past crimes is a matter for transitional justice solely.

The two views clashed from the outset in Committee discussions. It goes without saying that those in support of exclusion were not only acting from principle. The political stakes of the alternative were obvious. After two years in power, the approval ratings of the ‘Troika’ coalition government, consisting of Ennahda, CPR, and Ettakattol, had taken a dive, while other parties, including elements of the old regime— or those supporting them— were becoming more competitive. The political exclusion clause would put a clear end to this rivalry and allow the Troika and its supporters to firmly establish themselves as the unique choice. For the CPR, Ettakattol, and the Wafa movement—which suffered the greatest decline in popularity over the last three years—it was a question of survival.

It must be noted, however, that not all of Ennahdha supported the exclusion clause. A part of the party opposed it, though one might argue this was by resignation rather than conviction. The clause, for instance, was highly unpopular with human rights organizations and the civil society in general. Further, the fear of being perceived by the public as abusing their position to eliminate what they considered to be an annoying adversary was also a possible consideration.

It is worth emphasizing that this was not Ennahdha’s first attempt to push through its exclusion agenda. The first was via the so-called ‘immunization of the revolution bill.’ The second was during the debates on the transitional justice bill. The subject was again on the agenda during the debates on the law of the interim constitutional court. The adoption of the election law and the new article 167 therefore brings closure to a long series of attempts by a faction of Ennahdha and its allies to exclude, en masse, people who, while being stigmatized by their previous association with the ancien regime, could nonetheless mount a viable challenge to Ennahdha’s position.

The passage of the electoral law without an exclusion clause must be welcomed, since the mass political exclusion of thousands of people— regardless of the reason— and collective punishment through extra judicial means, would only have damaged efforts to reconcile the nation and consolidate the process.

One of the objectives of the new Constitution (Articles 34 and 46), it must be recalled, is to achieve equal representation for women in elected assemblies. However, divisions quickly emerged during debates on what the best way to achieve this would be. One group favored a combination of vertical and horizontal alternation, arguing it is the only way to achieve parity or anything near to it as provided by article 46(3) of the Constitution. Horizontal alternation requires more than just including women on alternating slots on the lists. It imposes on political parties the obligation to also ensure that leadership positions on electoral lists in the different constituencies are also filled in an alternating manner between the genders. The result, for instance, would be that if a party presented lists in eighteen constituencies, at least six of the candidates heading the lists should be women.

Another group —mostly smaller parties and Ennahdha—opposed the idea and were willing to compromise only on vertical alternation. The alternative, they argued, would be difficult to implement as they did not have enough women within their ranks. How can a party have enough women for vertical but not horizontal alternation? This argument is, if anything, fallacious, and runs contrary to all the fine speeches made by the parties in the NCA.

Further, if there is anything to be learnt from history, it is that vertical alternation cannot achieve anything near to parity in the assembly. This is clearly demonstrated in the 2011 election law that adopted vertical alternation but resulted in only 23% of NCA seats for women. In most cases, only the heads of parties’ lists—usually men— will have seats. Smaller parties, because of the electoral system used, will have only one seat on each list. Absent specific proactive approaches, such as horizontal integration, to get women to head party lists and increase their chances, they are still going to be disproportionately, let alone, equally represented in parliament.

Due to the rigid positions taken by the different groups, a proposal was put forward to reserve a quota—instead of insisting on outright parity—of leadership positions on electoral lists in at least a third of party lists presented. Failure to comply with this requirement would result in automatic invalidation of lists. This was also rejected, in particular by Ennahdha, CPR, and the Wafa movement who seemed fiercely opposed to anything that would lead to parity or progress towards it. The last moments of the vote were characterized by violent outbursts, exposing the misogynistic traits of some members and the complicit silence of others.

In reality, the election law’s provision on this subject should come as no surprise given the opposition already mounted against the whole idea of parity during the constitutional debates by some parties. Considering the overwhelming number who adopted the Constitution in January, however, it is still astonishing that pro women and parity groups faced such fierce resistance to proposals expected to give life to the constitutional aspiration of gender parity adopted by the same parties.

With the adoption of the electoral law, Tunisia may have again proven that the process of consolidating gains made over the past three years is well on track.Yet, the politics around the adoption of the law, especially the debates on the political exclusion and gender parity provisions reveal a number of disturbing realities which could undermine the strengthening and consolidation of its new democracy. One merits mention. Tunisia’s NCA overwhelmingly adopted, indisputably, the most democratic Constitution in the Arab world. However, the body, which remains responsible for adopting all implementing legislation for the Constitution—at least during the short to medium term—is not exactly a gathering of progressives, as the gender parity debate revealed. The debates exposed the hypocrisy within a large part of Tunisia’s political class. At the risk of jeopardizing the ideals of democracy, freedom, and equality guaranteed them by the new Constitution, Tunisians must be careful about the choices they make for their next leaders as the country prepares for elections.