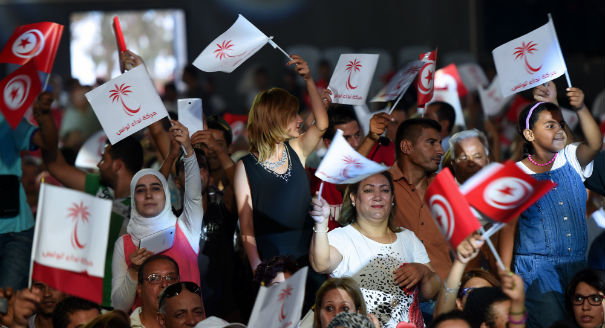 On October 26 and November 23, Tunisians went to the polls to elect a new Parliament and to elect the President. Both elections are key milestones in Tunisia’s ongoing democratic transition following the adoption of a new Constitution earlier this year. Pending the second round of presidential elections scheduled for December 21, these elections are a penultimate step towards the consolidation of the democratic transition process, sparked by the overthrow of Zine El Abidine Ben Ali in the 2011 uprising. The exercise has been rated as a success that could serve as a model for other neighbors who also experienced Arab Spring revolts. Additionally, the political parties’ acceptance of the results has also reinforced confidence and expectations for a stable political climate. In a region where most of the democratic transition processes launched at the same time drag on in chaos  and violence, or  have resulted in a return to the status-quo, the relatively peaceful, transparent and democratic nature of the recent Tunisian elections only adds to what one may arguably call ‘the Tunisian exception.’

These giant strides, in particular the recent parliamentary and presidential election process, while important, do not provide a complete picture of the political landscape and climate though. Neither do they reveal the full implications for Tunisia’s political, institutional and constitutional stability in the immediate future.

Consider the following numbers, for instance. Of the estimated 7.8 million potential voters in Tunisia, only 5.2 million (66%) registered to vote. Of that number, only 3.5 million (68%) turned out for the legislative elections. The figure was even lower— 3.3 million (64%)—for the first round of the presidential elections one month later. In terms of total eligible voters, only 42 % of the electorate voted in both elections. For a nascent democracy whose roots lie in mass citizen action, voter turnout for the first free and fair elections falls below expectations. The reasons for this disinterest from more than half (58%) of the electorate are beyond the scope of this article, but the figures are a red flag.  While some may write this off as mere indecision, it may also signal a rejection of the entire political class. This suggests that there are cracks in the nascent system, which Tunisia’s new political elite must not ignore.

The detailed break-down of the parliamentary election results are also revealing. The secular Nidaa Touness (NT) party received 39.6% of the vote, winning 86 out of 217 seats.  The Islamist Ennahda party came second, receiving 69 seats with 31.7% of the vote and maintaining their position as a major political force. The Free Patriotic Front secured 16 seats with 4.1% of the vote, the Popular Front 3.4% and 15 seats, and the secular centre-right party Afek 3.2% and 8 seats. The remaining 24 seats are divided amongst smaller parties and independents. If NT’s victory and eventual peaceful assumption of power demonstrates proof of Tunisia’s maturing democracy, it has also revealed the deep polarization that still prevails in the political landscape, notably between Islamists and secularists. This divide was demonstrated on an even larger scale in the first round of the presidential elections, where only a 6% difference was registered in votes  received by the front runners— Beji Caid Essebsi of the secularist NT and the non-partisan transitional President Moncef Marzouki. Enndadha— which had hoped to perform better in the parliamentary elections, and also dispel perceptions that it was dominating the political scene— refrained from fielding a candidate for president, and Mazourki was thus able to pick up votes from its supporters.  One positive outcome of this configuration is that it secures against absolute domination of the political landscape by any one party. This divide, however, reflects a split in the country that remains a disturbing reality which must be carefully managed to avoid potentially explosive tensions downstream.

Tunisia’s polarized politics also has constitutional and institutional implications.  The NT has the most seats in the new legislature but lacks the requisite majority to form a government without entering into a coalition with other parties. There are a number of possibilities—two of which are important here—for the way forward. The first is an alliance with parties of similar ideologies. The most likely partners at the moment are the Popular Front (PF) and Afek Touness (AT). However such an alliance is likely to be weak or even unstable. The PF is too far to the left of the NT to be trusted as lasting coalition partner. Further, the PF itself an alliance of a heterogeneous lot—comprising pan-Arab parties, left and extreme left parties all with divergent economic and social programmes. This increases the risk of implosion and renders any coalition with them a risky venture.

Depending on the outcome of the presidential elections, the second possibility is a coalition government of NT and Ennadha, including perhaps AT. While this may seem unlikely—given that these parties are diametrically opposed, ideologically—there are a number of reasons that could tip the scales for such an alliance, especially if NT wins the elections. In exchange for some ministerial portfolios, an NT-Ennadha alliance will allow NT to build a more comfortable majority to allow it govern more stably and effectively. Some analysts also argue that this will reduce the risk of deeper regional divisions, which could result in unrests, especially in the South where Ennadha outperformed. Thirdly, such a move will signal to others that it is ready for compromise and open government despite the dominance of ancien regime elites in its membership, a concern for those who resent the party’s rise. In return, Ennadha gets to maintain its presence in the government and place in the political terrain.

In addition to the lack of a resounding electoral mandate for any single party, the constraints to forming a government and ensuring stability are also constitutional.  Article 89(2) of the Constitution grants the President of the Republic the authority to invite the leader of the largest party or coalition of parties in Parliament to form a government. This invitation must be extended within a week of the publication of the election results. In the wake of the recent elections, this provision is provoking debate as it is unclear whether the provision refers to the interim (transitional) president or his successor—who will not be known until after the second round of the presidential elections. Shortly after the announcement of the final results of parliamentary elections, Tunisia’s interim President invited the leader of the NT to form a government, a decision that fueled the controversy. Called to arbitrate, the National Dialogue— a group of key Tunisian trade union organizations which were also instrumental in resolving previous political deadlocks—has ruled that it is the newly-elected president’s power, not the incumbent’s, to invite the head of parliament’s largest party to form a government. This decision, which only served to divide opinion rather than lay the issue to rest, means the one week deadline stipulated in Article 89(2) cannot be operationalized and the country must remain without a government in the period between parliamentary elections and the second round of presidential elections. While this may not necessarily threaten the current functioning of the state, it reveals a gap in the constitutional framework that must be addressed to prevent conflicting interpretations of the same provision in the future that might lead to a much different scenario than today.

A return to dictatorship?

The NT’s performance in the elections (including the first round of the presidential elections) has provoked fears of a single dominant party, with increased risks of dictatorial rule, especially if it also wins the second round of the presidential elections.  The large number of members from the previous Ben Ali regime, which many in the PF alliance resent, is likely to reinforce this fear.  However, it is hard to envisage how NT could establish one-party rule in the current dispensation. Today’s Tunisia is a solidly politically plural society with well-established opposition parties that have the capacity to defeat attempts to return the country to the pre-2011 authoritarian era. In addition, civil society has matured and has played a very effective role as a counterweight to political elites. Civil society’s increasing dynamism and diversity also makes a return to an authoritarian system unlikely. Moreover, ordinary Tunisian citizens, who remain the most important bulwark against backsliding, have become more politically aware and vigilant. Nonetheless, the fear of a return to autocracy remains a serious which must not be overlooked as continues to carve its path towards democratic consolidation.