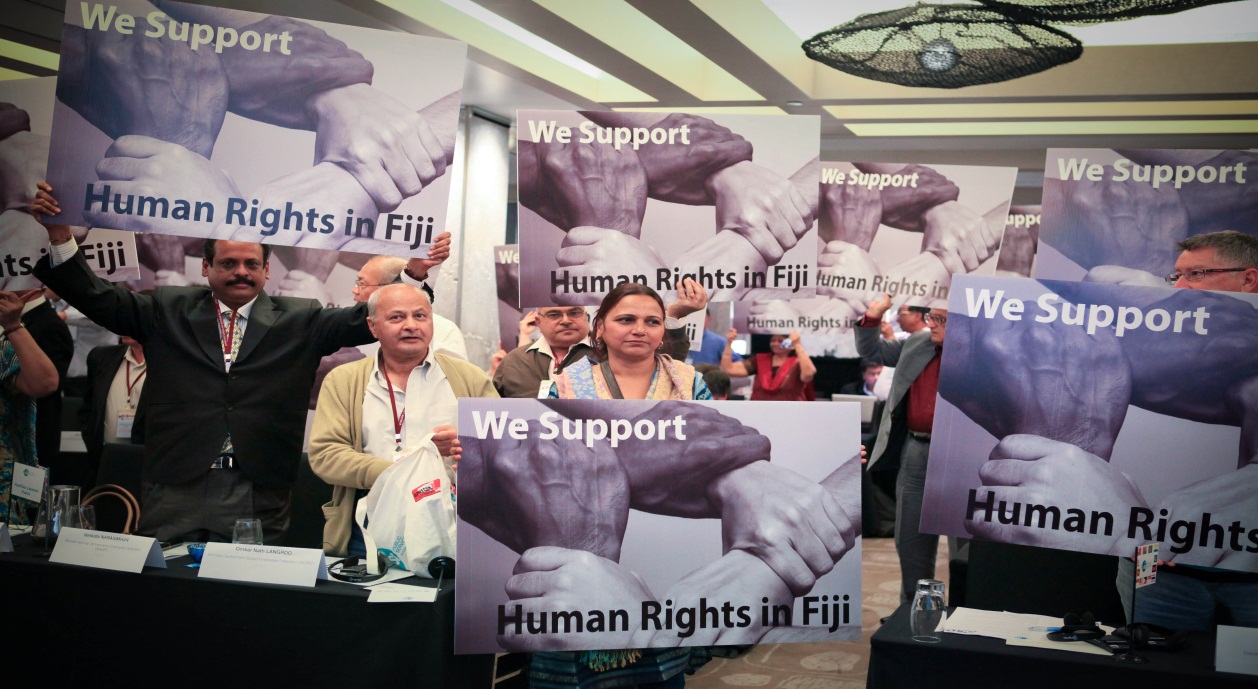 In promulgating Fiji’s new and fourth Constitution earlier this September, the country’s leaders hailed it as “the Constitution Fiji needed to have in order to join the ranks of the world’s great democracies”, and described the event in triumphal terms ranging from “historic” to “revolutionary.”

The document is certainly progressive in some respects: it provides, for instance, an expansive bill of rights with particular emphasis on socio –economic and cultural rights; an equitable and non-racial electoral system in place of the communal based systems as well as oversight institutions to promote transparency, accountability and combat corruption. It also creates a common Fijian national identity, which for the first time makes all citizens ‘Fijians’ irrespective of their ethnic identity. The Constitution also transfers the powers of the Great Council of Chiefs (GCC) to appoint the President to Parliament. Unlike before, this makes any Fijian, regardless of ethnicity more likely to be appointed to this office. In general, the removal of this institution, which—because of its exclusively Taukei composition—tended to favor members of this indigenous community, creates hope for more equal opportunities to all especially with the recognition of ‘Fijian’ as a single national identity. But is this enough to earn such glowing description or is the government just indulging in unwarranted self-praise?

Reaction to the document itself has been mixed, mirroring the political and ethnic divisions which remain a subtext of ‘post-revolutionary Fiji’. Government sympathizers have welcomed the document. Fiji’s closely regulated media is also accentuating its positive features lest it be sanctioned by the government through informal ways like limiting their access to official events, sources of information or, worse still, outright intimidation. The main political parties like the Social Democratic Liberal Party, the National Federation Party, the Fiji Labour Party, and the National Democratic Party, who see the document as a brainchild of the government, have opposed it - citing issues of legitimacy and principle. One need not look far to understand their position. To begin with, this Constitution, unlike the 2012 Constitutional Review Commission (CRC)’s version—which emerged from a more credible and participatory process but was summarily rejected by the government—is far from being a democratic product, having being drafted with little or no public input.

Further, it contains some disquieting provisions such as s.161 which grants the president powers to amend the document by decree if ‘ necessary to give full effect to [its] provisions or to rectify any inconsistency or errors in any provision [therein].’ Although only valid for the transitional period, such a provision opens the window for potentially abusive amendments during this period should the President be so inclined. This is all the more so because the Constitution, except for a vague safeguard requiring the certification of the Supreme Court, does not provide any objective criteria for determining what is (or is not) ‘inconsistent, or ‘erroneous’ suggesting that such a determination is predominantly the government’s call based on what it considers to be ‘inconsistent’ or ‘erroneous’. Could it use such a provision to erode gains made so far? By abandoning the recommendations from a Commission they set up and discarding the draft constitution it produced, Fiji’s leaders have sufficiently demonstrated that they are an unpredictable lot. Nothing can therefore be ruled out even within the short transitional period.

Other equally disturbing provisions include those granting unconditional and inviolable immunity to military leaders (s.159); giving extensive powers to the PM and Attorney General, disrupting the balance of power between the different arms of state (s.133); limiting political rights (s.6); shielding decrees from legal challenge (s.173), and expanding the role of the army (s.130). Not only do these run contrary to the government’s own non-negotiable principles that set the bar for a quality document, but also, they pose serious implications for the cultivation of a democratic culture and strengthening of the rule of law. Rigid amendment procedures, for instance, beyond preventing responsiveness to societal dynamics, also expose the document to extra-legal approaches to change.

Likewise, granting immunity to military leaders; as well as entrenching and shielding certain decrees and legislation (which were largely arbitrarily made), from judicial review raises serious issues of accountable and transparent governance especially where a need may arise to revisit circumstances that warrant redress or reparation.

In the same vein, limitations to fundamental political rights tighten the space for political participation. The negative potential of such a provision are already apparent, as the government sanctioned protests, albeit limited, that preceded the promulgation ceremony on 6 September

All these only allow for cautious optimism. The Constitution, as is, does provide a framework for democratic development, but which needs to be embellished further. The role of the new institutions established to enhance accountability and transparent governance, and the personnel running them, will be critical in this regard. The judiciary, which is central to this transformation, but has virtually been cowed into silence since 2006, will need to regain its voice and independence. However, whether or not the government will give it, and other actors involved in this democratic project, that free hand as the implementation of the Constitution commences, is anyone’s guess.

The potential for change, regardless of what factors drive it, brings a great deal of hope and expectations; which may generate a great deal of momentum that the government may eventually be unable to control. Like Indonesia and Myanmar before it, Fiji –viewed through this lens— also presents an interesting example. It is true that, in the Fijian case, the Government lost its nerve and eventually aborted the CRC process. Yet, it must be acknowledged that the whole experience itself helped shed light on what considerations can incline people to get involved. These include public dialogue and awareness, civil society mobilization and trust, built by some of the institutions involved —in this case the CRC, whose role was critical in getting major opposition parties on board. All these will have long-lasting and far-reaching consequences on Fiji’s democratic development downstream.

One reason for this conclusion is that the CRC process created space—albeit brief—for dialogue and engagement that was inspiring. As the elections draw closer and political activity and debate gather pace, there is cautious expectation that a similar scenario will develop. This is being shaped, in part by the transition from an arbitrary climate to one where constitutional legality, admittedly piecemeal, is crystalizing and prompting greater interest and participation from youths, women and civil society.

A second, perhaps, related reason is that while this Constitution is not perfect, it still provides the most practical and expeditious means of moving from arbitrary rule to more accountable governance. It must also be recognized that the Government, inadvertently or otherwise, incorporated some of the CRC proposals which have now become some of the strong persuasive points of this document. They include the bill of rights, transparency and accountability provisions. It is expected that the new ‘one man one vote’ or common roll system which does not differentiate voters based on ethnicity will defuse ethnic tensions which the communal voting system encouraged, and also help to build a strong sense of the newly recognized single national identity. The hope then is that over time, Fiji’s increasingly informed, vibrant, active, and more resilient populace will be able to capitalize on the limited gains of this Constitution and use it to bring about deeper and more desired transformational changes.

[1] Joni Madraiwiwi was Vice President of the Republic of Fiji (2005-2006), and is a traditional ruler and lawyer by profession.