Thailand’s post-coup constitution: Draft punked or ‘Once more with feeling’? 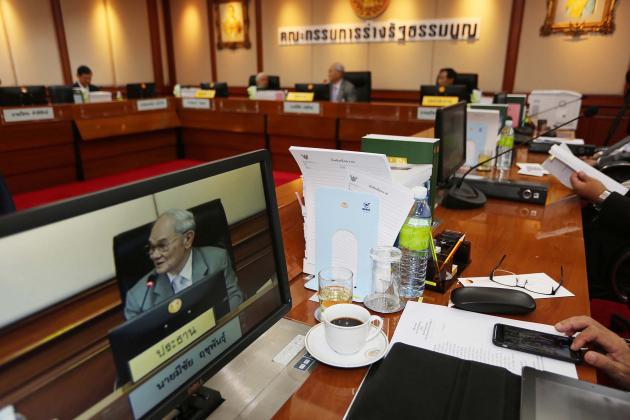 Thailand has to wait for a new constitution as the drafting process is being sent back to the drawing board with an entirely new Committee taking office last week.

Writing constitutions can be a very costly venture. How costly? In the past 10 months, Thailand’s Constitution Drafting Committee (CDC) was busy creating the country’s 20th constitution. The Committee members convened 158 times and accumulated a bill of 85 million Baht ($2.35 million), according to Thai media estimates – the catering alone cost 23.7 million Baht ($655,000). Was it worth it? Probably not. The constitutional draft did not survive the vote in the National Reform Council (NRC) on September 6, as the fully-appointed chamber rejected it with 134 votes to 105 and 7 abstentions. However, that didn’t really hurt Thailand’s military junta. Ruling since the Kingdom’s 12th successful coup in May 2014, the National Council for Peace and Order (NCPO), as the junta officially calls itself, have had a tight grip on the political process. With heightened media monitoring, censorship and arbitrary detainment of dissidents - euphemistically called ”attitude adjustment” - the junta also tries to control the official narrative.

Much Ado About Nothing?

Throughout the constitution drafting exercise, the stakes were incredibly low for the military government. As the Chairman of the NRC’s Legal and Justice Reform Committee has recently summed up: “The CDC is like a cook preparing food for the NRC. The NRC tasted the food and it was found to be not delicious.” On the one hand, a passed draft would have constitutionally enshrined the junta’s ‘reforms’ to the political system, which would have ended up severely restricting the powers of elected officials, be it through a new voting system, a fully appointed senate or several non-elected bodies that could usurp a co-existing, democratically elected government. On the other hand, a failed process buys another six months for the junta to cement its position and develop a draft constitution more to its liking – a win-win for prime minister and junta leader General Prayuth Chan-ocha.

From among several reasons, two stand out why the draft was struck down - sending back the constitution drafting process to its very beginning. First is the controversial late addition of the Committee for Reform Strategy and National Reconciliation to the draft constitution. Dubbed by the media as the ‘Crisis Committee’, it would have established a military-dominated, extra-parliamentary executive panel shadowing the cabinet of ministers that would have intervened during a yet-to-be defined “crisis situation”. The other reason for the rejection is, as with nearly all government bodies since the coup, the NRC had 29 members from either the military or the police force. CDC Chairman Borwornsak Uwanno hinted that all these members voted against the draft because of orders from their superiors – regardless that the whole process was initiated and dominated by the military junta in the first place. Whatever the reasons for orders were, it has definitely played into the hands of the generals. The failed draft vote has now conveniently extended the junta’s rule for at least another half year, as democratic elections are postponed yet again to mid-2017, since the entire constitution drafting process had to be restarted. According to the interim constitution, the drafting process would not only take another six months, but would also require the establishment of an entirely new CDC and National Reform Council.

The military junta was quick to appoint 21 new constitution drafters and picked Meechai Ruchupan as the Committee’s new Chairman. Prime Minister Gen. Prayuth was rumoured to have made his picks for the CDC - consisting mostly of former civil servants and legal academics - before leaving for the UN General Assembly on 22 September. The more curious was Meechai, almost openly campaigning for the CDC Chairmanship until his eventual appointment on October 5. Prior to the announcement, he revealed that PM Prayuth told him in private that it is ”very necessary and unavoidable" to take the position. Faced with an offer Meechai seemingly couldn’t refuse, he added ”I had no reason to ask more questions.”

The 77 year-old former speaker of the Senate has a lot of experience dealing with military governments, having been the legal adviser to the last three military coup-makers in Thailand’s history and also chaired the Constitution Drafting Committee after the 1991 coup, an interim charter committee after the 2006 coup and was appointed NCPO member in 2014 as the junta’s legal advisor. Back in May 1992, it was due to a legal loophole in the constitution Meechai drafted that then junta leader Gen. Suchinda Kraprayoon was appointed PM, despite a democratic election that followed the coup. This move sparked mass demonstrations that turned violent when the military opened fire on the protesters and killed 52 and injured around 600 people. What would later be known as the “Black May” protests marked the beginning of the end of Gen. Suchinda’s premiership, which only lasted 48 days. Whether such incidental loopholes – or well-placed enabling clauses – will make their way into the upcoming draft is one of the main conundrums of the new process. However, Meechai himself has strongly hinted at such possibility.

Also gone is the NRC, which is being replaced by the so-called National Reform Steering Assembly (NRSA) after an amendment to the interim constitution already in July, tasking the new body to “carry on” the work of the now-defunct NRC and “advise” the military junta on reform plans. There are many familiar faces among the 200 members, mostly because 63 of them were former NRC members and there is a large block of 80 military and police officers in the assembly again. Somewhat surprisingly, some veteran politicians are on board as well, who have been largely sidelined since the coup from both sides of the polarized political spectrum. The new body will be chaired by Captain Tinnapan Nakata. The 81 year old, like Meechai, is also a veteran of Gen. Suchinda’s infamous premiership in 1992 as his PM’s Office Minister.

Meechai Ruchupan, who mentored his predecessor Bowornsak Uwanno and current deputy Prime Minister Wissanu Krea-ngam as a legal academic at Thammasat University, is facing a seemingly herculean task in writing another draft constitution. He won’t be able to rely on the help of his mentee Borownsak, who declined an invitation to become Meechai’s advisor, but nevertheless is willing to “help from the sidelines”. Given his past work experience, it is unlikely that he will clash with the military government and is expected to faithfully follow the junta’s ‘reform’ plans throughout the drafting process.

What exactly will be included in the next draft is yet to be seen. However, some newly-appointed CDC members have suggested that the Committee will not start from scratch and will draw inspiration not only from the 1997 “People’s Constitution” that has long been hailed as the first truly democratic constitution in Thai history, but also from the 2007 constitution introduced by the military following the 2006 coup, as well as from the failed draft. Even though, other CDC members are in favor to start with a clean slate, arguing that it would take too much time adapting old parts from previous charters.

It is implied that the new draft will not be much different from the previous one, including the implementation of the infamous ‘Crisis Committee’, as strongly suggested by several junta members such as Justice Minister Paiboon Koomchaya and Prime Minister Gen. Prayuth himself. According to a CDC spokesperson, the first draft would be finished already by the end of October but not publicly disclosed until next January. The junta leader also emphasized that the drafters should not solely “rely on the principles of democracy or 'unlimited liberties' (…) without consideration of where the real problems are,” as it was read out in an – even for the military junta’s omnipresent media presence – unprecedented special broadcast.

The new Constitution Drafting Committee now has time until 1 April 2016 to present a new draft to be put up for a vote, but there is no guarantee that this one will be accepted either in a vote by a legislature or the subsequent public referendum. In that case, the current interim constitution sees no clause other than yet another restart of the drafting process, as it would make an endless loop possible, echoing a similar legislative limbo from Thailand’s tumultuous past.

The anthropologist Donald Hindley wrote in 1965, at the height of a despotic military dictatorship, that a “a government-appointed constituent assembly has been meeting for more than six years to prepare a replacement for the constitution discarded in 1958” and that regardless of a result “there is no expectation that genuine political competition will be tolerated (…) No one expects the replacement of the military as the arbiters of Thai politics.”

Exactly 50 years later, little seems to have changed as the military is in a comfortable position again to continue ruling directly through provisional clauses, while trying to cement its power to be best positioned for any twists and turns in Thailand’s never-ending political crisis.